I'd been seeing some buzz about the Enneagram floating around for a while, but it wasn't until my in-laws bought us "The Road Back to You" for Christmas that I really began looking into it. Within the first few pages of that book, I became Enneagram obsessed.

After reading the book, I was absolutely certain I was a One, The Perfectionist. Sure enough, the online test confirmed it. (I seriously doubt that someone who is a One could ever be wrong about being a One. Being right is like ... our thing.) But honestly, I didn't want to end up a One. I had kind of hoped to land somewhere else, but I am a One through and through. (With Two and Six following behind.) 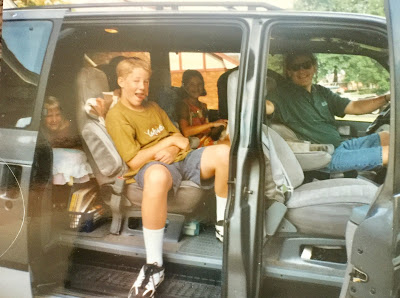 (I include this photo not only to show you how fashionable us Cliffords were in our Astro van as we headed out to take a road trip, YES ROAD TRIP, to Seattle, but also to say that I am a One to my core. If you look closely enough, you can see me wearing my headgear. When was I supposed to wear it? At night. But you know what else my orthodontist said? "And, you know, if you happen to be at home not doing anything, it'd be good to have it on then, too." YOU CAN'T TELL A ONE THAT. ONES LOVE RULES. I COULDN'T UN-KNOW WHAT HE SAID. So what did I do? I wore my headgear for the duration of this road trip. My name is Claire and I'm a One.)

Each of the nine personalities on the Enneagram gets a chapter of their own in this book. The author does a great job of deepening your understanding of each kind of personality. He gives you descriptions of healthy, average, and unhealthy versions of these personalities as well as mentioning the deadly sin of each, how they interact at work and in relationships, how they were as children, and how they respond in stress and security. At the end of each chapter, he lists some helpful bullet points about the road to spiritual transformation for that personality.

I wanted to share some quotes from the book and some insights or examples from my own life to pair with them. I have loved figuring out what makes me tick and why I can sometimes react or process things so differently than many of my closest friends around me. (Side Note: I don't think any of my best friends are Ones. And that's probably a good thing. A friend group could probably only handle one One. Bless you, friends.)

"That others appear less concerned and interested in joining their crusade to put this world aright infuriates them even more. Why don't people care as much as I do? Do I have to do everything myself? It's not fair."

Those italics, guys. Speaking my language. This little portion is found toward the beginning of the chapter and it practically sealed the deal for me. So many times I have felt frustrated because I think I am the only one caring about something. Sometimes I think my frustration is valid. There could be some real legitimacy in wanting others to get on board. But other times, it's me who needs to take it down a few notches and let people do their thing.

"But something else is fueling Ones' anger and indignation. Everywhere they look, people are having a grand old time indulging their desires or breaking the "rules" and not getting caught and punished for it, while Ones feel obligated to forgo doing what they want to do in order to do what they should do, namely, order our disordered world. To add insult to injury, they not only end up doing their share but they have to pick up the slack for all the jerks down at the beach drinking beer and playing volleyball when they have fun things they'd like to do as well."

There is a sense of martyrdom that I think us Ones have to get over. I felt this most in college. I was a music major so you'd find me in class from 8-5 and then in a practice room in the evening for 2-3 hours. Homework, studying, and my social life somehow had to fit in around that. So basically what I'm saying is that every minute of my life was spoken for. And I really did like it that way! I wouldn't have chosen something different for myself and even looking back, I wouldn't do it differently. The issue was that I wore busyness as a badge. A badge that somehow meant I deserved something more than all these "lazies" who had "easy" majors and had time to just have fun whenever they wanted. Spontaneous fun-having? Are you kidding me? I had to make time to have fun for goodness' sake! If I wanted fun, I had to write it in my planner. (And I'm sure I probably did.)

What happened over time is that I ended up feeling resentful towards people who prioritized time differently than me, who didn't care about school as much as me, and who found unplanned fun just falling into their paths at all hours of the day. Thank the Lord for good friends who will sit you down and say, "Enough, Claire. You can't walk in and expect dinner to be made for you and then also not do your share in cleaning it up. You're not the only one who has things to do." And thank the Lord for boyfriends (who turn into husbands) who say, "You are always going to have something to be stressed out about. You have to change how you react to it and how you deal with it. You think you always get to be the most stressed and the busiest of everyone. And that's not how it works." It was all true and, thankfully, I listened. I still love being busy and being involved in lots of things, but I don't wear it as a badge, I don't expect a round of applause for it, and I don't think everyone else's schedule needs to look like mine. I also am better with boundaries. I have learned (and am learning) the value in doing less and saying yes to less in order to have a little extra margin and little more sanity.

"If you suspect someone's a One but you're not sure, watch how they react when they open a dishwasher someone else has loaded. If they cluck their tongue and start reloading it while muttering something like, "Good night, why can't people do this correctly?" then there's a better than fifty-fifty chance they're a One. Sometimes a One won't let you finish stacking the dishwasher because they jump in to "help." They'll lean on the counter while you're loading it and say "eh-eh" when you place a mug where they think a bowl should go."

That paragraph. I laughed out loud when I read it. Now, I will say, while I am pretty particular about how my own dishwasher is loaded, I don't necessarily feel the need to fix your wrong way of loading. I promise I'll let you load your dishwasher however you'd like. But the point that he goes on to make is that us Ones really truly don't think we're being critical in our need to fix and correct people and situations. We feel deep down that we're only trying to help and improve things! The problem comes when we forget that not everyone needs improving. And even if they do, it's not necessarily my job to do it. That's where it's important for us Ones to gauge the situation. When is our input needed and when it will it be valued?  When will it be seen as critical, offensive, or step on others' toes?

One of the most beneficial things I learned from this book was that Ones come with a pretty mean inner critic. So when we are criticized by others, it can feel especially awful because we've probably already been beating ourselves up internally about the very thing we're being criticized about (along with plenty of other things). But the really dysfunctional part about it is that even though we know this inner critic of ours should probably be silenced, we also value it in a weird way. We feel it has saved us from making even more mistakes. Learning how and when to shut this voice off is pretty important. In the past few years, I've been figuring this out without really even knowing that's what I was doing. Finding out how to give myself and the people around me more grace, how to live free of unnecessary guilt (like mom guilt), and how to let go of mistakes instead of replaying them have been some very worthwhile life lessons.

As with every personality, there are some really great things about Ones. Here are just a handful of the positive points I picked up in the chapter about myself.

-I love hosting people and nothing means more to me than knowing I've been instrumental in helping someone feel taken care of in my home.
-In all of my mess, the true heart I have is to be good, to do good, and to do the right thing.
-I care A LOT about details.
-I want people to depend on me. So when I'm organizing an event or in charge of something or am asked to complete a task, you can have 100% confidence that it will get done. I love being someone that others can count on.
-Something the book pointed out is that healthy Ones love seeing others become their absolute best. And that is so true for me! It lights me up to talk about what my friends' dreams are, what they imagine themselves doing one day, or what they wish they could become.

"What's important for us to learn as we study the Enneagram is that we can't change the way we see, only what we do with what we see."

The goal of the Enneagram isn't to make you realize how awful you are or force you to find a new personality. The goal is also not to become obsessed with your personality, using it as an excuse to behave in certain ways. Rather, the goal is to find the places where God is wanting to change or mold us, what strengths he wants to highlight, and what compassion he wants to instill in us for ourselves and the people around us.

I'm a bit of an Enneagram geek now. So if I'm looking at you with my eyes in a sort of glazed-over state, I'm probably just trying to figure out what your number is. It's just so fascinating! I highly recommend finding where you land on the Enneagram and reading "The Road Back to You." Happy self-discovery!
Posted by Claire@MyDevising at 3:40 PM