since they've been gone 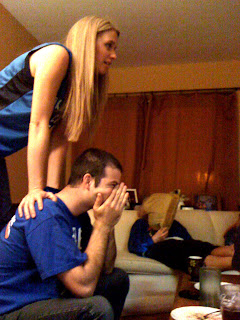 (I took this picture one night while we were watching a very intense Thunder play-off game.  Obviously, Colt is hopeful about the outcome.)

The past 3 1/2 ish months, Megan, Phil, Cooper, and baby-on-the-way lived with us.  They were in the process of building a house, so we all figured if we join forces, both families will save a buck or two.  It was a wonderful experience.  I know that not all situations like this end up well, but the Suarezes are some of the most laid back people, so it was perfect.

It's been about 2 weeks since they've been gone and I've missed:

1.  Waking up to other people in the house
2.  Going to sleep with other people in the house - I can't tell you how many times I make Colt get up and triple check all of our doors.
3.  Playing mommy with Megan and Cooper - Yes, I'll be 'playing' mommy for real very soon, but it was fun to observe and learn a few things from Megan.  And I love that little Coop-man.
4.  The cooking schedule - Megan and I switched off most nights on cooking.  (Some nights were "we're having sandwiches or mac and cheese or PB&J or you can find whatever you want" nights.)  If I cooked, she and Phil did the dishes and vice versa.  It was a great system.
5.  As Colt and I were showering/getting ready for bed several nights ago, he started singing one of the songs I've written, "Stolen Water," that we play as a band.  He was really botching up the words so I made the comment that I could quote all the words to one of his songs. He challenged me to do it.  So, I chose "Youthful Intention."  It took a while, as I had a few mind blocks and needed a few cue words from him, but I did it.  He, then, attempted my song one more time.  As we sang each other's songs, we used weird voices, we were loud, and we were annoying.  I told Colt that I feel like we're falling back into our true weirdness now that Megan and Phil are gone.  They're our good friends so it's not like they don't know our personalities, but if you're trying to be considerate, you just can't walk around your house yelling and singing all of the time.  Anyway, Megan and Phil, you might have just been the ticket to making us a little more normal.  Now that you're gone, it's been getting very interesting very fast.

Although I know we'll both miss each other, there are some things to look forward to.  The Suarezes own a home and get to furnish/decorate it exactly how they want and we get to start working on the nursery for our baby boy!
Posted by Claire at 7:30 PM