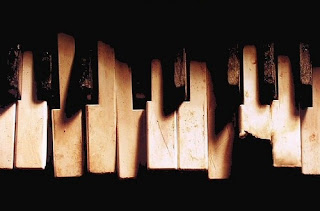 I started recording with Aaron one evening before we left for vacation in Portland.  We were about 1 1/2 hours into it and something happened.  My keyboard went crazy.  By crazy, I mean when I played a C, it sounded a C and a C#.  If that doesn't mean anything to you, just know that it's not pretty.  (Well, it's not pretty when it's not meant to be played like that.)  This issue was happening on several notes in no particular pattern or order.  We tried what we could, but the problem was not resolved.

As any musician does with their instrument, I have had a decent share of keyboard issues.  One time, we were playing a show and the song was done ... but my organ sound was not done.  It continued to sound.  Naturally, I freaked out and pushed every button possible and it stopped.  Later, I figured out what happened.  Never again.

There have been many times where my sustain pedal has freaked out and sustains nothing.  Not a very pleasant or musical sound.  That issue was solved with a new pedal.

One day, we were practicing and my fingers pressed down to play ... and CRUNCH.  I'd never heard my keyboard crunch before.  It was weird.  This was definitely a problem only to be repaired by an expert.

Finally, my favorite piano mishap story:  In high school, I played with our youth band and used the church's keyboard every time.  I was familiar with it like I'm familiar with most technological things ... just enough to function.  One night, we were playing and my sustain pedal would not stop sustaining.  I tried to think the opposite way and hit the pedal again so it would stop.  That did nothing.  It was a mishy, gross, and loud organ sound that would not go away.  So embarrassing.  Eventually, I just turned the entire keyboard off, which, I'm sure, created a nice, abrupt halt in the music.  This experience was paired with my recent feelings of I need to break up with my boyfriend.  I kind of hinted of the break up on the phone with him later that night and he asked me, "Claire, is this all just because your keyboard freaked out?"  His question wasn't that off.  I can make impulsive decisions based on emotions sometimes.  However, I really did need to break up with him.  We're all better for it.

All of that to say ... once my keyboard is back up and running, I'll be recording like crazy.  Stay tuned!
Posted by Claire at 5:29 PM