I'm in a band, Mopak, and not only do I love the members, but I love their wives.  Kelsey is Evan's wife (bass player) and Megan is Phil's wife (drummer).  A lot of times, I forget I'm actually in the band.  There have been many moments when I've been talking with the girls as the guys are setting up/starting to play.  Then it hits me that I should probably make myself useful.  I keep telling Kelsey and Megan that they should just brush up their tambourine and triangle skills so they can be in it too, but they aren't too fond of the idea.  For now, they're just our biggest fans and 2 really great friends of mine.

For about a year and a half now, Megan has been the only mom.  In October, that changed when I had Duke.  But, tomorrow, things are changing again!  Megan will be having a precious little baby girl.  So, that makes 3 kids.  But wait ... I'm not done.  Kelsey is pregnant with twin boys and we'll be meeting them in March sometime! 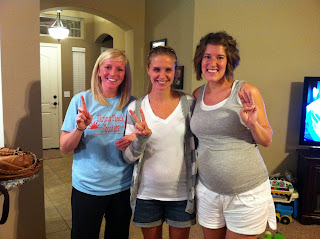 Here we are ... all the pregnant ladies together.  Our fingers were representing the trimester we were in. 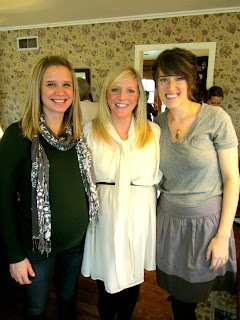 This was taken at Kelsey's shower a few days ago.
So in a matter of 5 months, our band will go from 1 kid to 5 kids.  We're not quite sure the effect this will have on our practice time.  It will be interesting, that's for sure.  The girls were talking and we thought it'd be great if we could just put all 5 of them in a room, shut the door, and then just hope for the best.  However, I'll feel bad for little Camryn.  4 boys and 1 girl ... not too fun.  Although that does seem to be a great recipe for another band!

I love being a part of Mopak and it's just extremely convenient that the band wives all get along and have so much fun together.  So, here's to having 5 kids running (or sitting) around in 2 months!
Posted by Claire at 5:15 PM