Friday night, we had a little band dinner.  We hadn't had one since the twins were born so we were definitely in need of it.  It was like old times ... except there were 5 kids instead of 1. 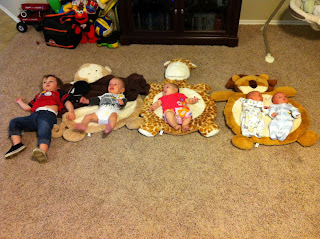 Cooper - 21 months, Duke - 5 1/2 months, Camryn - 3 months, Kai and Whit - 1 1/2 months
And there they are.
We all ate dinner and then at 8:00 p.m. we had a nursing party.  It's pretty convenient to be on the same schedule.  I hope it works out like that all the time.
As we went to bed that night, we knew storms were coming.  The scary part was that they were coming in the night ... and I sleep through everything.  In college, I had Danity Kane's "We in the car ... we drive slow ..." as my alarm.  The idea was that since it was the worst song ever written, I would wake up to it, reach over, turn it off, and get up.  Instead, I ended up being the annoying roommate that pressed snooze 9 times before actually waking up.  That's still how I am today.  Colt will poke me and say my name repeatedly and I still won't wake up.  So, knowing that the tornadoes were coming in the night and the sirens would be going off while I was sleeping was not comforting.  I prayed to God that he would wake me up when they went off.
Sure enough ... I woke up at 2:30 a.m.  It took me awhile to understand what I was doing/hearing though, which is always the case for me when I first wake up.  What's that noise?  Where am I?  Is that the wind howling?  Are those sirens?  About 2 minutes later when I was legitimately awake, I woke Colt up, telling him the sirens were going off.  We both ran down the hall to turn on the TV and see what the deal was.  Luckily, everything was north of us and we were in the clear.  I caught a quick glance of my awesome hair and awesome retainers in the mirror and then went back to bed.
We woke up later and had a lazy Saturday morning, followed by a little bit of cleaning here and there.  (I've recently learned that if you just clean a little each day, it hardly takes any time ... AND you can keep your house consistently clean.  I know, I'm a bit behind.)  Tornadoes were supposedly going to come our way again that night so we did what any normal person preparing for a storm would do.  We went to Babies R Us.  We took a few baby gifts back (a bit behind on this also) and bought one of those high-chair-clip-on-the-table things, an Ergo baby carrier, and nursing pads.  And you betcha I'd be grabbing that Ergo carrier if our house was going to be swept away.  Gracious, those should be cheaper. Thank goodness for merchandise credit.
The storms that night were supposed to be pretty bad.  The weathermen kept saying you either need to get underground or get out of the way.  No bathrooms, hallways, or center closets would do.  So encouraging.  And again, the storms came in the night and were of no threat to us.  Thank goodness.
Sunday, we skipped church and had our own church sitting on our front porch swing.  It was nice.  That night, the 3 of us had a little picnic in the Myriad gardens. 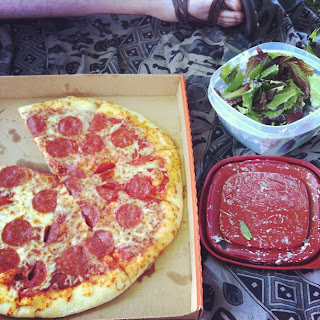 Then we drove around, shared a cup of coffee, sang "Big, Big House," and made each other laugh a lot.  It was a great ending to the weekend.
Posted by Claire at 2:00 PM