I spent Friday perfecting my Yamato fried rice (I think I'm getting close, people!), cleaning spit up off the floor*, and preparing myself/my home for Reese's birthday weekend.

Sara and Reese got to my house Friday night and, while heading out the door, I mentioned to Reese that I should probably grab a cardigan because it may get cold in the movie.  (When we do birthdays, everything is a surprise.  So I ruined that one.)  The birthday celebration was kicked off with dinner at VZD's and then "The Five Year Engagement," which we found out later she had already seen earlier in the week.  So far, we weren't doing so well with the surprise element of the weekend. 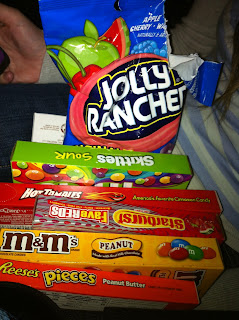 (We came prepared for the movie.)

We came back to my house, had a piece 2 pieces of cake, and Reese opened presents.  I also managed to ruin the surprise of going to the Zoo the next morning.  You're welcome, Reese.  Happy birthday, again. 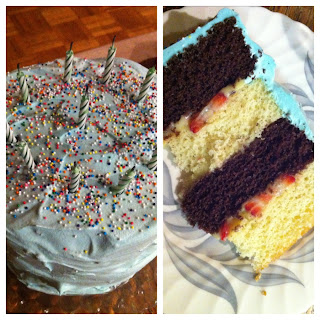 (Sara made this yummy cake!) 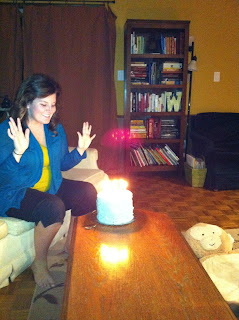 The rest of the night was spent dissecting our personal styles.  We discussed our issues and tried to solve them by browsing totally awesome looking girls on Pinterest.  We learned that I need to purchase some cropped, colored pants and some tops.  (Seriously, my top wardrobe consists of v-necks and t-shirts.)  We also learned that Sara wants to wear more belts with spikes and leather jackets.  (I'm kidding ... but she did use the word "motorcycle" in describing her desired style.)  After we solved our fashion problems, we went to bed.

Saturday morning we ate breakfast, got ready, and left an hour and a half later than we said we would.  Oh, and I mentioned to Reese that Cooper (Megan's son) would be at the Zoo.  This was pretty much the last surprise left for the weekend and I thought I'd go ahead and ruin that one too.  Sara yelled, "I just knew we couldn't get out of the house before you said something!"  So yes, Megan and company (Camryn and Cooper) were planning on meeting us at the Zoo. 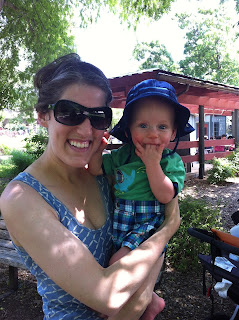 (Yes, the back of my hair is messed up and yes, that is a gray streak in my hair.)

We had an exhausting and hot day at the Zoo ... but it was really fun.  And it was Duke's first Zoo trip! I can't wait until he can actually look at all of the fun animals.

Nothing crazy is worth documenting except that we packed a totally yummy lunch ... 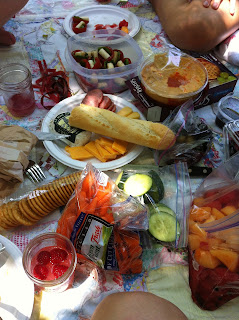 ... and we encountered 2 terrible human beings.

We met these 2 when we tried to make our way through some double doors into a building at the Zoo.  Reese (pregnant) was holding a door, Megan had Cooper in the stroller, I had Duke in the stroller, and Sara was holding Camryn.  Because we basically had our own circus with us, we took up a lot of room trying to get through the door.  A woman walked up, ridiculously close behind us, acting like she was inconvenienced waiting on us to get through.  She also didn't feel the need to take Reese's place in holding the door.  No, don't worry about holding the door for all of us.  Go ahead, soccer mom with sunglasses and pink lipstick.  It wasn't long after she showed up that another boy showed up.  He was probably close to our age.  He tried to weave through all of the madness saying, "Uh ... pardon me ..."  Is this real life?  Pardon us, please!  We are all trying to get a little AC here and guess what, we need it faster than you do.  Again, he did not offer to hold the door, so Reese continued to be the gatekeeper.  Unbelievable.

After 4 hours at the Zoo, we were pretty pooped.  We guzzled large Sonic cokes and went home to relax for the rest of the evening.

Colt was gone the entire weekend for a men's retreat and he got home Sunday afternoon.  Gah, I was so glad he finally returned to me.  Is anyone else a big baby when their husband is gone?  Anyway, the weekend closed out with snow cones and driving around with my 2 boys.

Hope you have a great start to your week!
Posted by Claire at 11:31 AM