The Birthday Club has officially closed out our 2014 birthday season.  If you're really into The Birthday Club (who isn't?) and you've memorized all of our birthdays (of course you have!), then you would've noticed that we seemed to have skipped over Sara's birthday.  Mine is here, Reese's is here, and Sara's is not to be found.

Well, back in June, we really did try to give Sara a decent birthday celebration, but due to my nursing fiasco, we were unable to follow through.  And by "unable to follow through," I mean we ate pizza from Little Caesar's in my living room, had Braum's chocolate malts for dessert, and Sara adopted a dog who was running loose in my neighborhood and happened to find his way onto my porch, peek into my front door, and cause me to say, "Oh, look.  There's a little dog on my front porch."  I should've known better.

So there we were sitting in my house - a newborn who wouldn't nurse, a foggy-headed, sleep-deprived mom, a pregnant mom, and a birthday girl with a lost dog.  It was the party of a lifetime. Reese and I decided Sara needed a redo.  Of course Sara was all "No, it's not a big deal!  I don't need another celebration!"  But she really did.  It was probably a semi-depressing night.  I mean look at it. 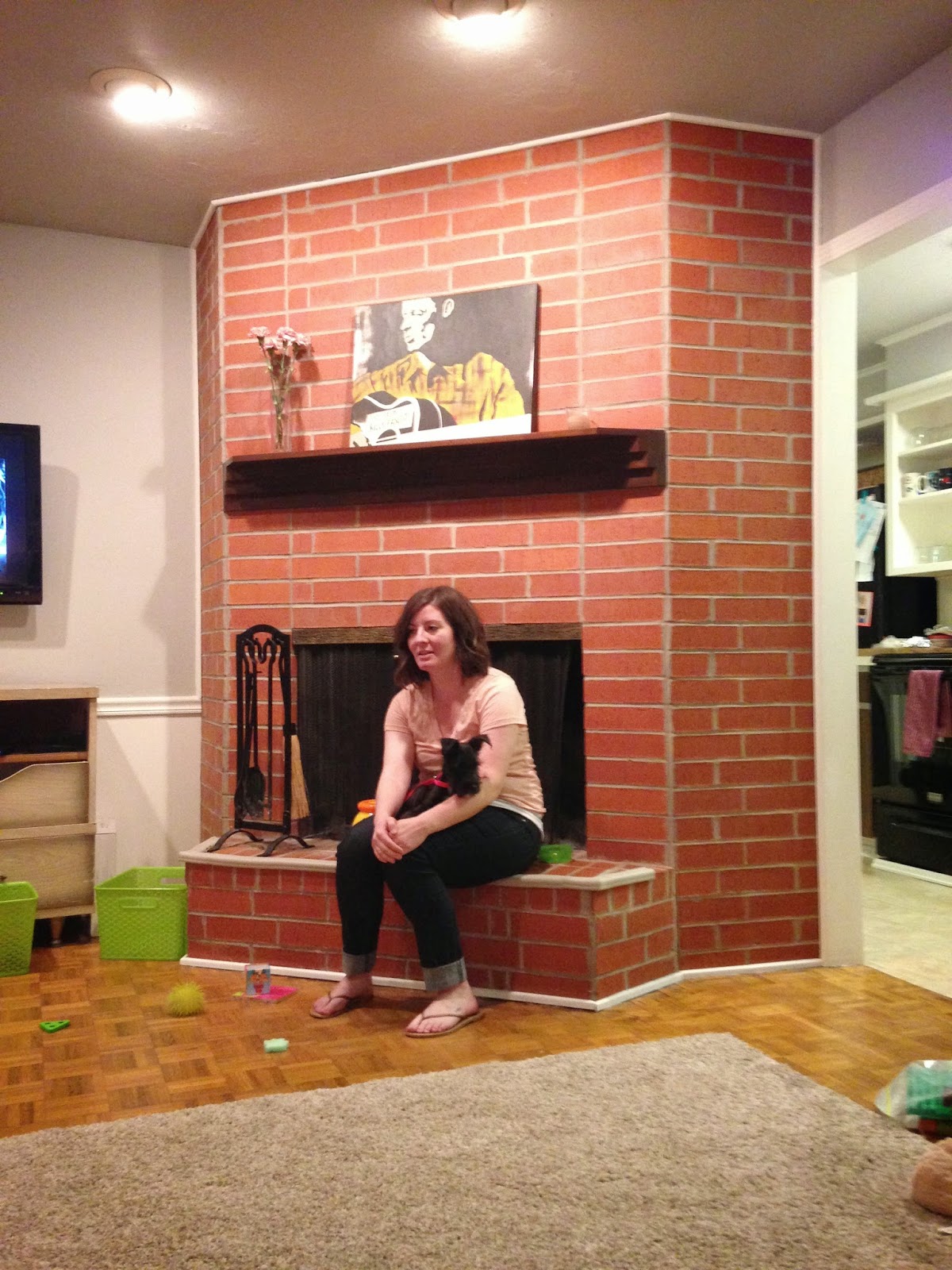 We obviously made turning 28 a great time for Sara.

A redo it was.  First, we tried out some juices and smoothies at Organic Squeeze. 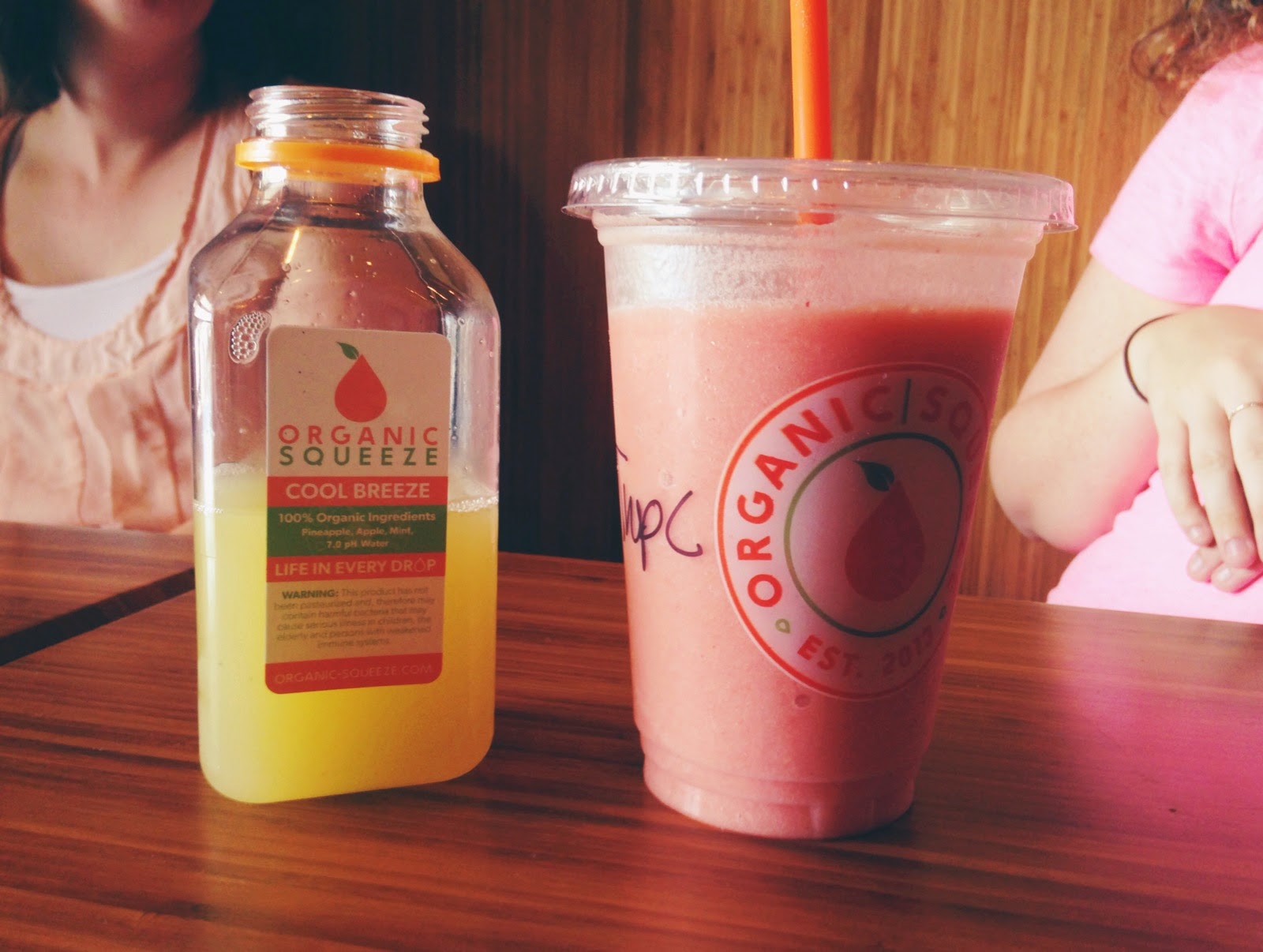 It was really good!  We also had the privilege of watching an Imagine Dragons concert on one of their TVs.  RADIOACTIVE!! RADIOACTIVE!! IT'S WHERE MY DEMONS HIDE!!  I'M NEVER CHANGING WHO I AM!! 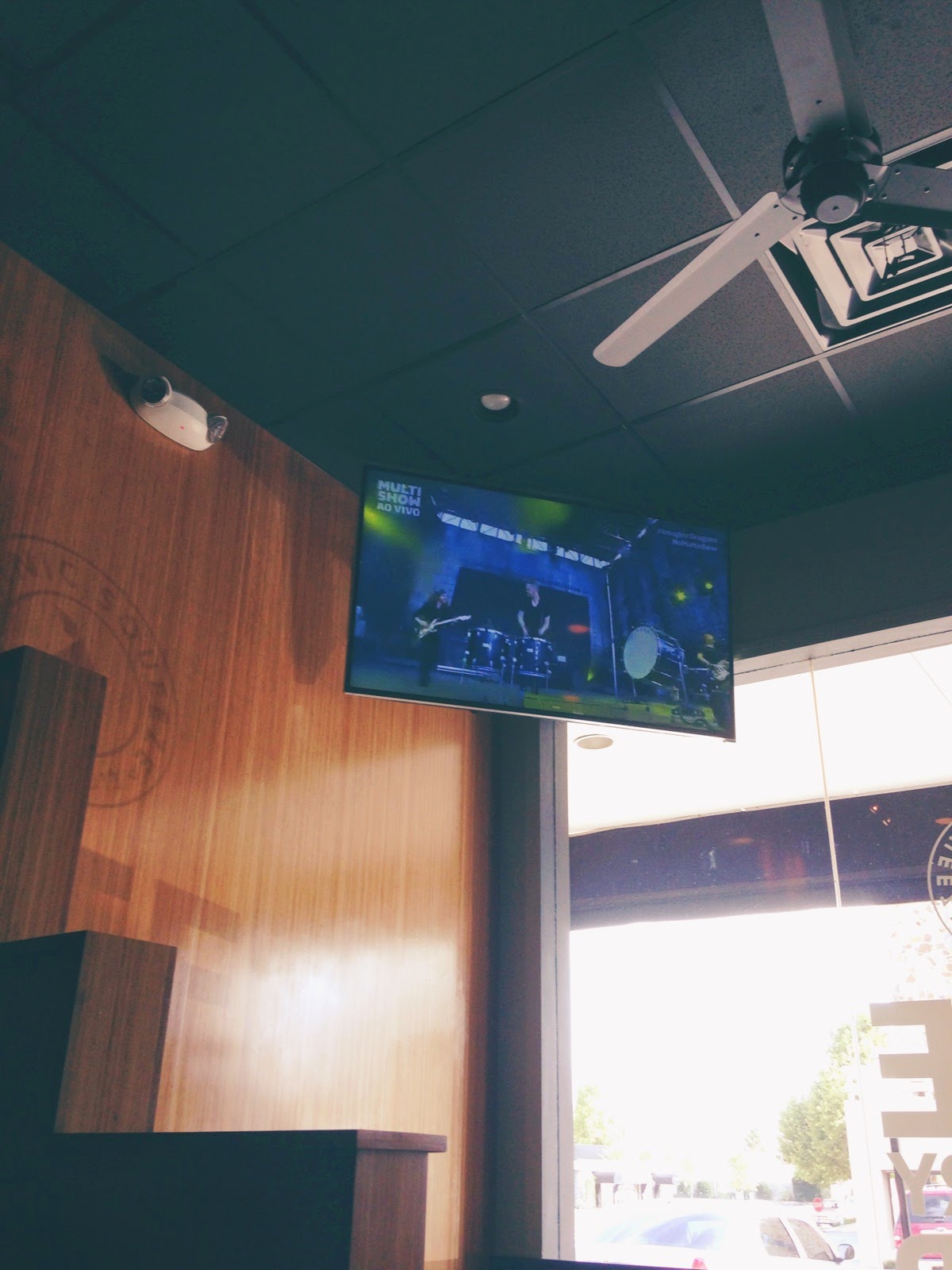 Next up was a little visit to Anthropologie where we told Sara she could pick out a new clothing item.  She chose a really cute dress and we approved. 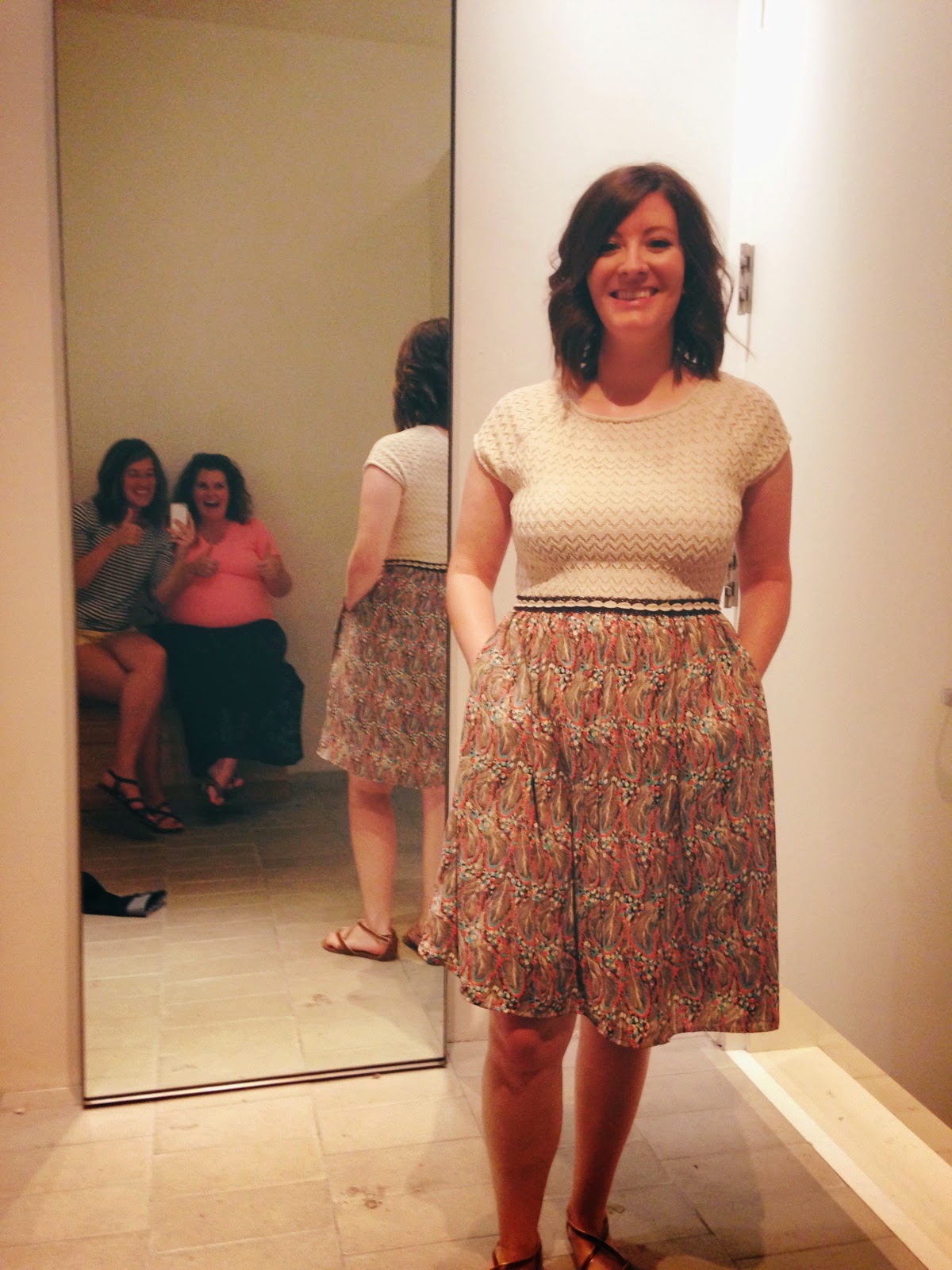 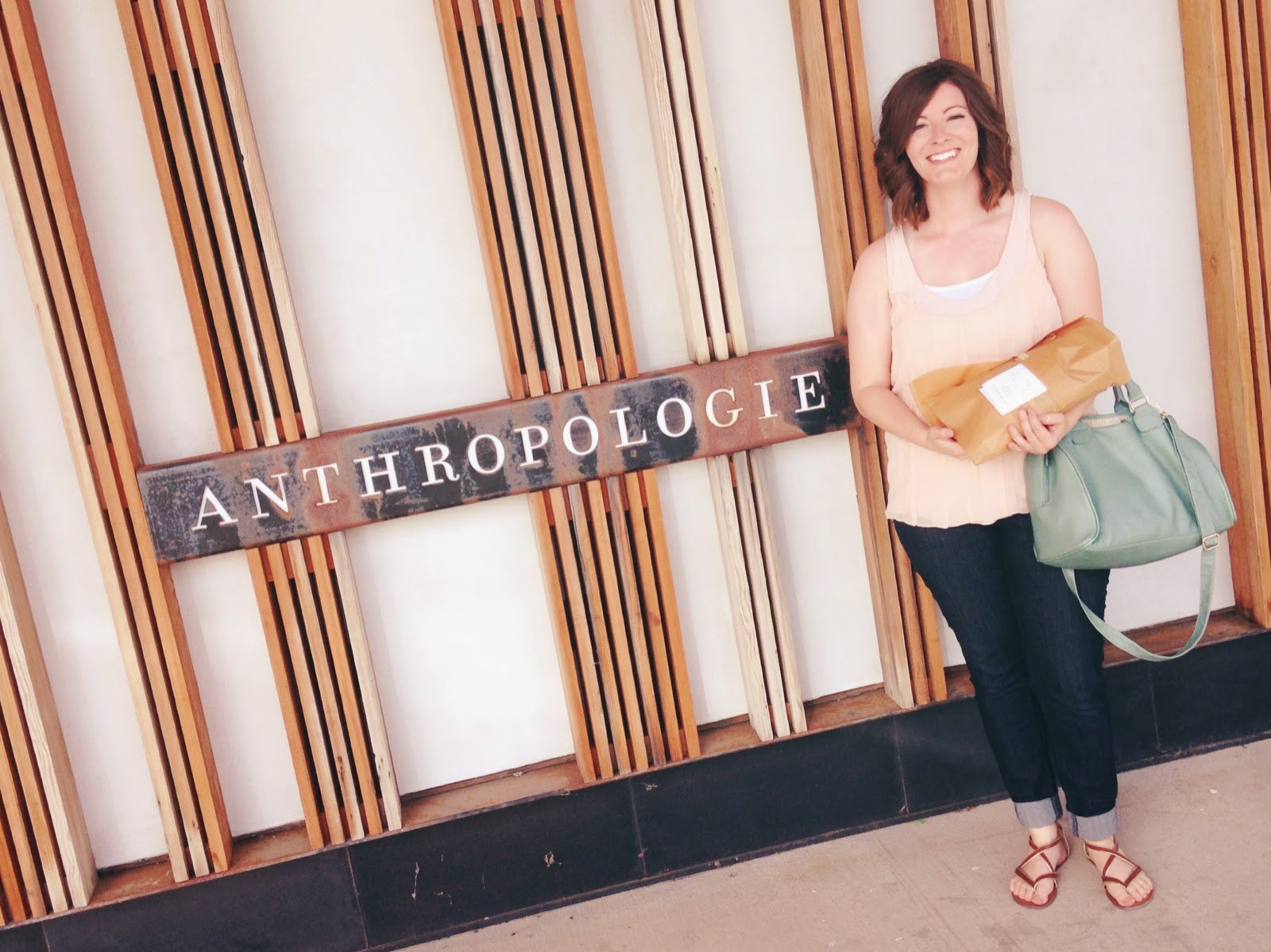 For dinner, we ate at Sheesh Mahal.  Reese and I were pretty new to Indian food, but it's one of Sara's favorites, so we gave it a shot.  None of us had been to Sheesh Mahal so we basically had the entire menu explained to us.  The employees were very kind and patient, never making us feel silly for knowing absolutely nothing.  The verdict?  The food was amazing and I highly recommend this place.  My personal favorites were the garlic naan, butter chicken with basmati rice, and chicken teeka.  So good. 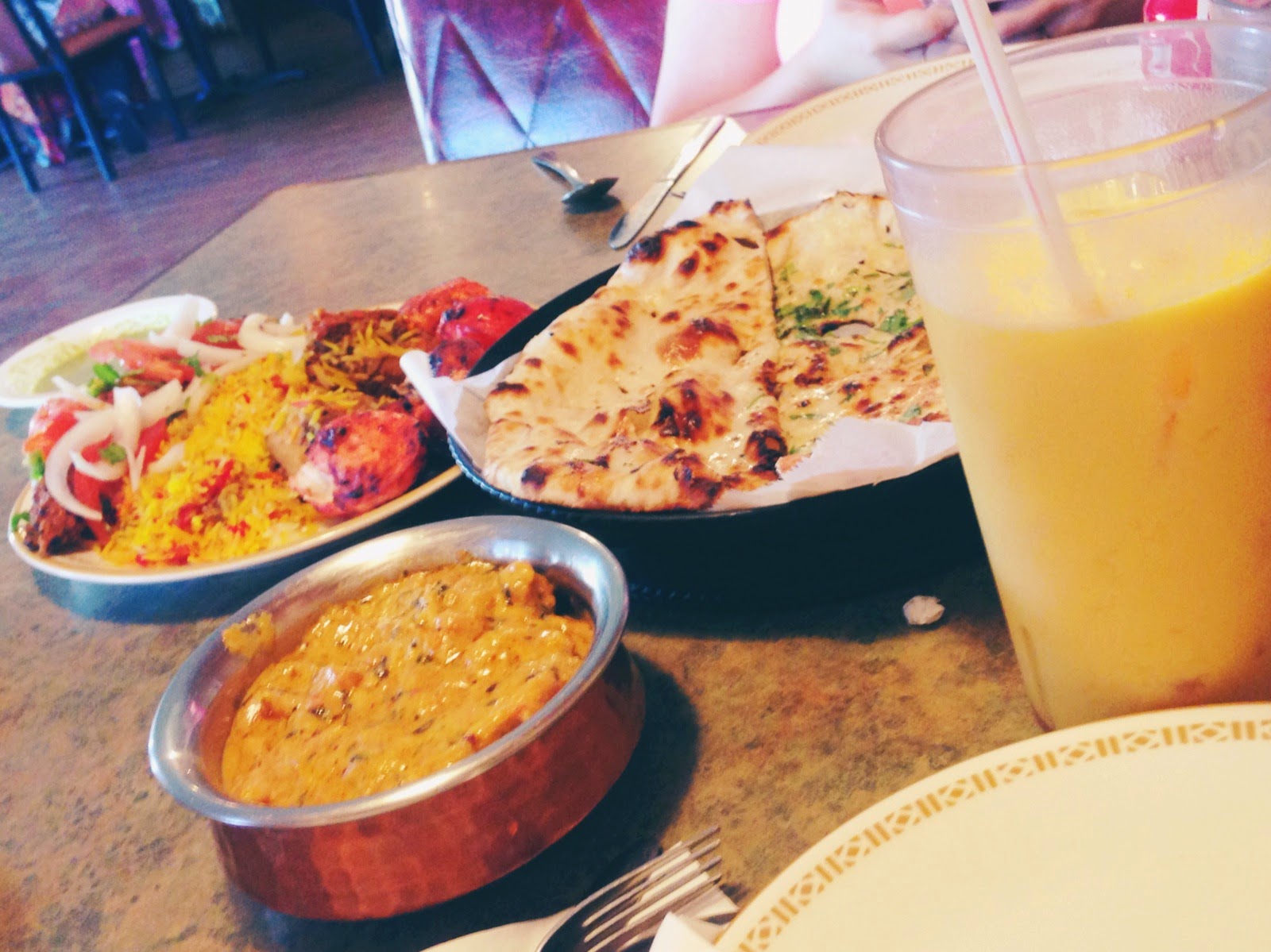 A Birthday Club night is never complete without dessert, so we headed on down to The Melting Pot for some chocolate fondue. 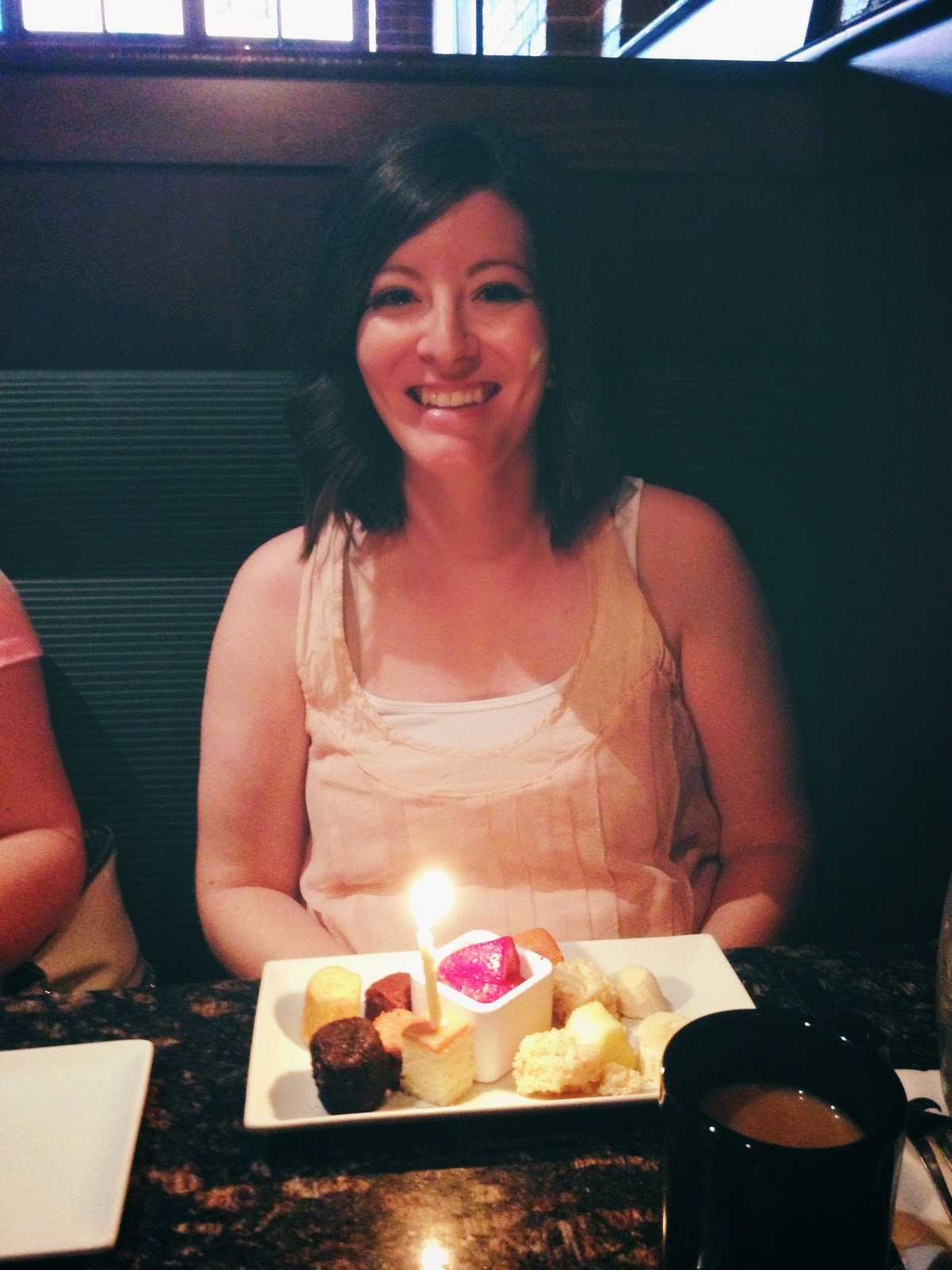 Our waiter wished Sara a happy birthday and we told him it was basically 2 months late.  Later, we laughed about how great it would've been to just go into all of the details so he could fully grasp the reason for the belatedness.  "Well, Claire was nursing with a breastmilk supplement in a tube taped to her chest, so we couldn't go anywhere ... then we found a lost dog and decided it'd be a great idea for him to hang out with a newborn baby ..."  We could hardly breathe we were laughing so hard.

4 years ago we took Sara to The Melting Pot for her birthday, so we decided to compare photos. 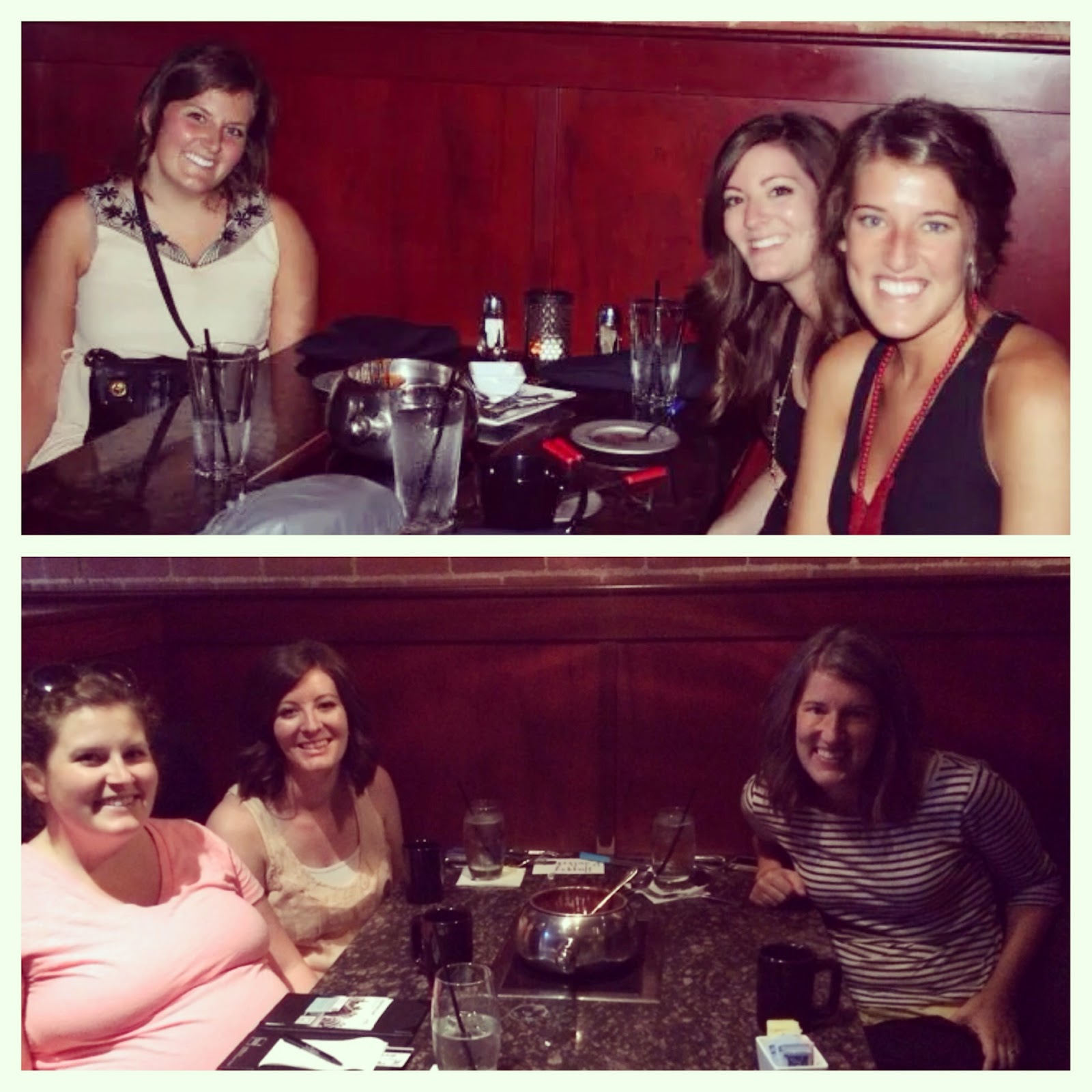 A lot of things have changed in the past 4 years, but one thing remains the same:  we all think each other are hilarious.

Until next year!
Posted by Claire@MyDevising at 1:10 PM

Email ThisBlogThis!Share to TwitterShare to FacebookShare to Pinterest
Labels: MISCELLANEOUS, the birthday club