God loves to show up 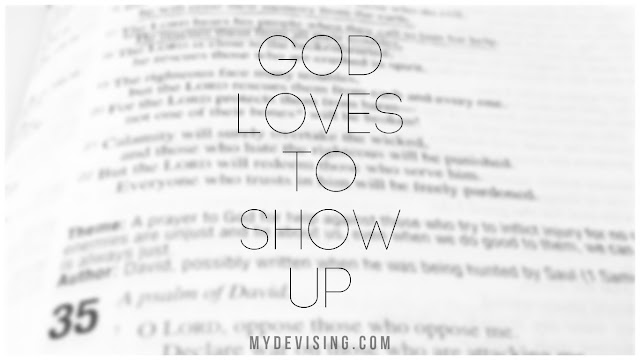 Sometimes I get nostalgic and flip through pages of old journals.  The other day, I was cleaning and reorganizing some things, so I decided to take a look.

I stumbled upon this entry from June of 2009.  I had been married almost a year, had finished my first year of teaching, and was in a bit of a rough patch spiritually.  This is what I wrote:

I don't know who you are, God.  Sometimes during the day, I'll spout off a thanks for something that happened or something you gave me.  But where are you and who are you?  I don't want to read the Bible because it's too perfect and pretty.  It doesn't make sense to me.  I want to FEEL you.  I'm sick of just knowing stuff.  I want to feel you.  I don't at all though - not at all.  Not when I'm singing or playing the piano or even praying.  You are not there.  You used to be there - like in high school, when I'd get excited about you and reading the Bible.  You were even there when Colt had his surgery.  You comforted me.  That's when you left.  I couldn't find you anymore.  It's been like this for months.  Sometimes I'm tired of trying to find you or get "back on track" with you.  What do I do with you?  What are you to me now?  It can't be who you were during the surgery or in high school because I'm different and I need different things.  It sucks because I'm not really sure what I need.  I know I need to feel you exist beyond stories and cute moments.  Do you really care about ME?

When we started attending Our Lord's Community Church back in 2010, the tone of the prayers in my journal became more urgent as I became more aware of the fact that God was speaking to people.  And not just preachers, speakers, authors, and leaders.  God was speaking to normal people like me.  On a regular basis.  People in my church were hearing from God and I wanted to know what that was like.

I struggled with the fact that I felt like I hadn't really actually ever heard God speak.  Why did it seem so mysterious and hard to pin down after being a Christian for all these years?  Was he just not speaking to me?  Was I doing something wrong?  And even if I could actually hear from God, what was it supposed to sound like?  What if I was the one saying it?  Was I manipulating the voice of God?  How do I know what to listen for?

I'd been taught my entire life that Christianity was all about a relationship with God.  But it wasn't until I began attending OLCC and reading "A Praying Life" that I began making the connection between my relationship with God and prayer.  I began to uncover that somewhere in the depths of me, I didn't feel like I really needed prayer.  I was fine, I could handle life, and I wasn't really all that desperate for God.  I realized that although I understood my need for a Savior, I didn't necessarily feel that need.  I prayed and asked God to show me what it meant to feel helpless, weak, and out of control.  I couldn't teach those things to myself, so I needed God to take me there.

It wasn't long after I began praying those prayers that my journey with anxiety began.  I was immediately shoved onto a new track in my life with God.  God didn't answer my prayers in a quick or simple way.  He didn't answer them in the way I wanted him to.  However, he did answer them.  He answered them in the best way.  He gave me the opportunity to understand how absolutely depraved my soul is without him.  As a result, and really for the first time, I recognized my true need for a Savior and began sensing the Lord's voice.  (I'll have to save what "sensing the Lord's voice" means to me for another post on another day.)

We can have a lot of things in place spiritually, yet feel like we are continually hitting a wall.  We can memorize scripture, go to church, attend a community group, play music on Sunday mornings, be a part of a bible study, pray at meals, and yet still feel some sort of emptiness.  It doesn't mean you don't love the Lord and it doesn't mean that all of those things aren't good, life-giving things.  What it could mean is that there is some sort of relational element between you and the Lord that is missing.

If you're in a frustrating spot spiritually right now, it doesn't mean you'll be there forever.  The hope is that things can change.  Keep asking for the presence of God and for the assurance that he really is there.  And then do your part to put yourself in a position to be open to it.  We have to come to him in our mess and in our honesty, willing to pay attention, listen, and respond.  He loves to show up.
Posted by Claire@MyDevising at 3:01 PM