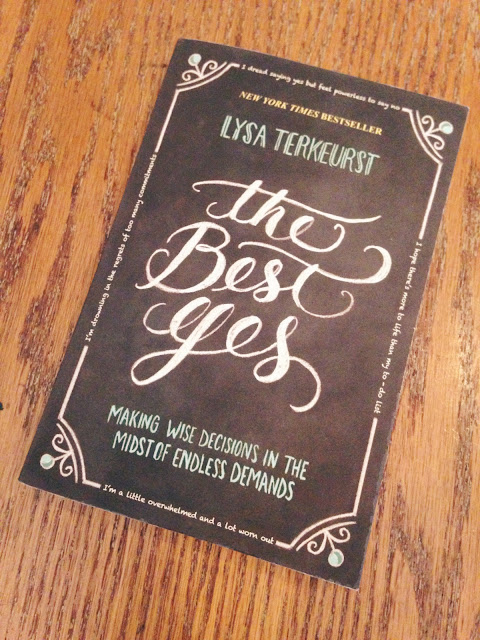 Last summer, I was a part of a 6-week book study that totally got me through the early months with Nova.  This summer, we reconvened and read "The Best Yes" by Lysa TerKeurst.  My first thoughts:  A whole book about decision making?  A whole book about when to say yes and when to say no?  I wondered how it would all pan out, but I made some great discoveries about God, myself, and my life in the midst of it.

While reading this book, I learned that part of my surrender (my word for the year) experience is learning how to say no.  I already knew this about myself and any of you that know me well know this too:  I love saying yes.  I love being busy, I love doing all the things, I love being in charge, I love helping, I love being involved.  I genuinely love it.  I want to do everything for everyone.  Not in a "I'm such a servant-hearted person" kind of way.  But in a "I want to deliver what you're asking" kind of way.  I like knowing I can be counted on.  I like being depended upon.  However, there is a line.

Often, I have a hard time stepping back and saying no before it's too late - before I've totally run myself ragged and dug myself into the Hole of the Overwhelmed.  It's hard to dig yourself out of there, you know.  Getting out of it is way harder than it would've been to just say no in the first place.  So saying no is a piece of surrendering for me because it means letting go of some yeses.  But saying no gets me closer to my Best Yes, my ultimate assignment, my "soul thing," the author calls it.

Recently, I said yes to helping launch a ministry at our church in the fall.  I felt that tug in my spirit, this isn't a yes for you.  But I justified my yes.  It's just for the fall.  It's some promo stuff, some organizational stuff, and then it's done.  I can just do it and then it's over.  It's not like it's an ongoing commitment.  I came up with lots of excuses so I could say yes, my favorite word.  But the very next day, I knew.  I knew my answer should've been no.  I felt it, but I chose not to pay attention to it.  Those little moments where the Spirit quietly guides us in small directions are very important.  This was a seemingly small thing.  But in the scheme of my life and of my ability to say no and find my soul assignments, this was a big deal.  After saying no, our pastor's wife said she totally understood and that she would look for someone else.

Look for someone else.

Colt and I also recently said no to leading our community group.  It's been a wonderful 2-3 year stretch, but we knew our time was done.  I fought it for a while because there was a part of me that felt like I was giving up.  But we weren't giving up; we were giving in to the next season.  We could sense this change in our hearts and in our lack of vision for the next step.  But along with that, a need for change was obvious even logistically.  New things were beginning to plant themselves in our hearts, minds, and weekly to-do lists.  And sometimes when new things come in, old things need to go.  We love this community group and have loved being able to facilitate discussions and prayer, but it was time for the baton to be passed to some new leadership.  We will still be attending our group and it will still be a weekly commitment for us, but moving from "leading" to "participating" will be a refreshing change for us.

During the 6 weeks of this book study, I said no to 5 things.  I kept a running list as I was reading so I wouldn't forget.  Some were things that would've been a constant demand, some were things that only would've taken up a few months of my life, and some were sporadic things.  But I knew instantly that the answer should be a big, fat NO.  Now that decision making is more of a process and less like a timer that goes off if I don't say yes in time, I know when it's my turn to pass and allow the responsibility or task to be given to someone else.  I feel freedom in saying no and now, I reap the benefits of it.  I see how my life feels at the end of this summer, having said no to 5 things that would've bled over into the inevitable chaos that fall always brings.  I feel so much lighter.  To which things I say yes is more important than how often I say yes.

Lysa's "The Best Yes" is an easy read with a solid message.  It may not be a book full of mind-blowing, world-changing theology, but if you're one who wants to feel confident, empowered, and purposed with every decision you make, then it is for you.
Posted by Claire@MyDevising at 3:11 PM