a celebratory goodbye to nursing 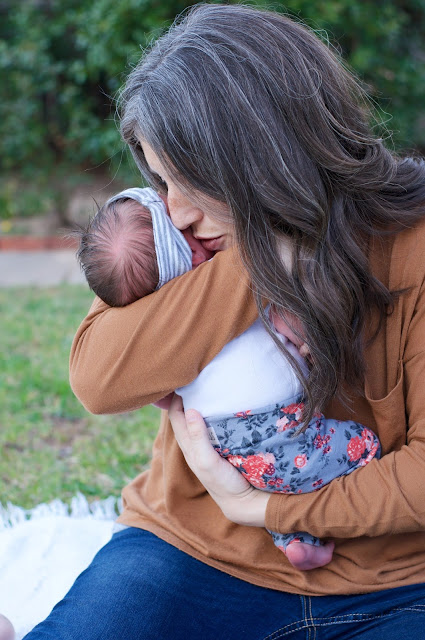 {I don't feel any obligation or pressure to share my reasons for nursing or not nursing my children. It's just something I want to do. Because of how things went with Nova, I want to share how everything went this time around. Not everybody cares to talk about their own experience with feeding their babies, and that's fine! And along with that, not everyone cares to read about why people choose what they choose. But this piece of my motherhood has impacted me on a spiritual level, and I feel like it's a story that doesn't just give details about feeding decisions. It's a story that points to God, his goodness, and his knowledge of what is best for us even when we don't understand.}

Things were off from Day 1.

I had hoped nursing would work this time around. But for some reason, I knew it wouldn't.

The entire pregnancy, I held loosely to the idea of nursing. I had learned that it doesn't matter how much I know about nursing. If my baby can't or won't do it, then that's that.

Veda wasn't satisfied with feedings from the moment I met her. The hospital is usually a dreamy place for me. People checking on me, taking care of my baby, and bringing me food all while I stay horizontal? Sign me up! But Veda wasn't happy. I would nurse for 30-45 minutes and sometimes she was satisfied. A lot of times she wasn't. So I'd try nursing again. After that point, she would cry and I would "shhh" and rock her until she gave into sleep. And usually, she would only fall asleep if she was on me. Putting her down in the hospital bassinet was not an option most of the time.

It was similar to our hospital stay with Nova, but the intensity was turned up a few notches this time. I figured it was just an eating issue. I thought, Once my milk comes in, this will probably change. This 10 lb. baby just needs some milk!

We had her on a Friday morning and headed home Saturday afternoon. Things got worse. She could not stay asleep in her crib at any point, day or night, for more than 25 minutes. It was miserable. We spent hours and hours going in and out of her nursery, trying to soothe her, trying to figure out the problem. And even in all of our trying, the fact that she was not immediately soothed or even calmed when we picked her up was a big red flag. Day after day, night after night, this continued.

All of this built up to one horrible night that Colt and I will never forget. Veda was inconsolable. No amount of nursing would satisfy. In the early morning hours, after no sleep, we decided to give her a bottle of pumped milk.

At our 5 day appointment that morning, the scale showed exactly what we had thought. Our sweet baby had lost a notable amount weight and was hungry - a problem that is so awful and heart-wrenching but also wonderfully simple to solve. Just like with Nova, I was making more than enough, but she couldn't get it from me.

"She's just not getting enough."

The doctor could barely get the words out before I said, "Okay! Well, that's good to know!" My excitement might've caught him off-guard, but in that moment I felt an amazing rush of relief. He kindly suggested we set up an appointment with lactation. But I knew we wouldn't. We wouldn't do that again. No, I would walk out of his office with a bottle-fed baby and I would be so thrilled about it.

I'll never forget the way I felt as we drove home that morning. We had said a celebratory goodbye to nursing and, thanks to the Lord and my journey with sweet Nova, I did it with freedom, ease, and excitement.

My plan was to pump as long as I could. Well, I guess I've learned a thing or two about giving myself grace because "as long as I could" translated into 3 days. This was a busy and stressful time for our family. Pumping wasn't worth it.

That sneaky voice tried to push its way in a few times with "Can't you just sacrifice and pump for this baby? Even just for a month? Are you that selfish?" But I knew what was on the line. My sanity, my time with my children, my freedom, my rest. All of those things take priority over breastmilk.

The first day of bottles couldn't have been more different than the days before it. She was full, happy, and content. She slept in her crib and took amazing naps.

Also worth noting? That same day, we got an offer on our house after just 12 days on the market. It was a red letter day.

Our experience with feeding Veda made me so thankful for our struggles with Nova. I fought hard and pushed and doubted God. It was a long battle and the Lord knew I needed to fight it then. This time with Veda, it needed to be a fast decision with quick answers. With a toddler running around, a 5 year old to take to pre-k, selling our house, packing everything we own, and then moving, it was clear that fighting for breastfeeding just wouldn't make the cut.

I had already seen so much purpose, reason, and redemption behind our journey with Nova, but the Lord wasn't done with it. And that's why, to me, it was worth another blog post. Even though all of those emotions from 3 years ago are gone and healing has taken place, I want to remember that God is still finding new ways to re-purpose that whole experience. And he's not done re-purposing your thing either. The circumstance that you're in or the circumstance that's over. We can have full confidence that God really does know what he's doing as he's weaving our stories.
Posted by Claire@MyDevising at 1:59 PM