Ohh, the horror stories I've heard about men assembling cribs.  I've been excited about this moment, but also dreading it.  I never was sure what all the hubbub was about, but I had braced myself for what the evening of "Let's put the crib together" had in store for us.

I knew I shouldn't be in the room when the assembly was taking place.  I ask too many questions and want to know too many things.  I told him that I'll cook dinner while he puts the crib together.  Both of these things are the kinds of tasks that neither of us want opinions/suggestions on, so this worked out well.

So, Colt spread everything out on the floor.  (There were no missing pieces, which was another fear I had.)  Then, he read the manual and put it together.  I know, it's so anti-climactic.  A big, dramatic, hilarious story was not in the cards for us. 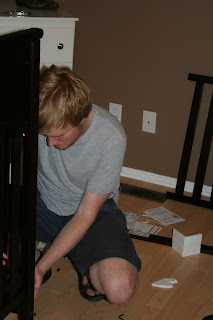 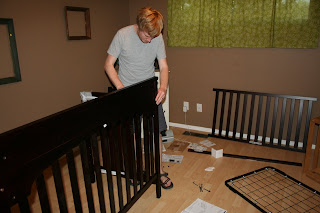 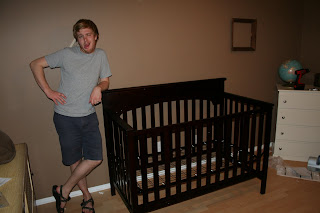 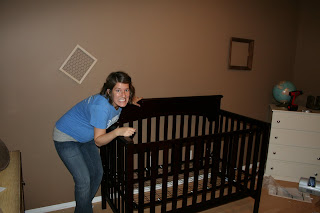 We bought our crib at Babies R Us for about $195.  It was one of the cheaper ones there and we liked the simplicity of it.  There are a lot of things we can use second-hand or buy at thrift stores, but many sources told us not to take shortcuts on this purchase.  After all, the baby does lay in it. :)

Coming up next:  the rug and other accessories ...
Posted by Claire at 3:08 PM