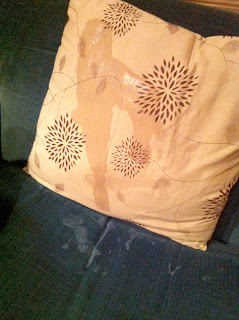 Well, if you're on the 'a lot' side of things, your life is very different from the folks around you.

1.  If you happen to care, you wait to put on your nice clothes until the second before you walk out the door.  But even then, there is no guarantee you will remain clean.  Once you realize you will be covered in spit up regardless, you start to get used to smelling like sour milk all the time.  Cute, huh?

3.  "Dreamfeeds" are a joke.  Sure, you can do a dreamfeed at the time that a dreamfeed happens, but it won't really be a dreamfeed.  Your baby will have to wake up because your baby will have to spit up.  In order to make sure all burps and spit ups are out, we have to stay up with Duke for around an hour after he's done eating.  In the beginning weeks when you're getting up in the night to feed, this means you are up a LOT longer than the average ole Joe.  A 4:00 a.m. feeding is not over at 4:30.  It's probably over somewhere between 5:15-5:30.  Party.  Dreamfeeds are wonderful for babies that aren't spitters.  Feeding your baby while they stay asleep (or mostly asleep) and putting them back down really did seem like ... a dream.  And it was.  I tried it once and, boy, did I pay for it.  I got back in my bed feeling accomplished as a mother, only to wake up 30 minutes later to a screaming, choking baby covered in spit up.

4.  There is just more time involved in general with a baby that spits up a lot.  You have to spend time burping.  You have to keep them upright for quite awhile after they eat.  And even when the 'upright' time is done, they still may spit up right up until the time you lay them down again to nap.  And hey, when they wake up from that nap, they might have saved a little for you.  Spending time with Duke and really watching his body language is what makes the whole process more successful.

5.  Feeding out in public isn't as easy.  You're already worried about keeping yourself covered, but in addition to that, you have a baby that can make a very big mess very quickly.  It's a race against the clock for me.  Can I get him out from under the Hooter Hider and up onto my shoulder with a burp rag before it all comes out onto this really cute couch and beautiful wood floors?

Every spit up is worth it though.  I'd do it forever for him.  Well, when he's 18 I'd rather not, but you get my point.  I know that 'this too shall pass,' but boy does it seem unending.  I will say that it has gotten better.  It may have to do with being on Prevacid (which he's taking for the pain of reflux, not the volume of spit up) and it may have to do with getting older ... or both.

So, if any of you are experiencing the same things, you are not alone!
Posted by Claire at 7:22 PM