I thought yesterday was going to be my last day on this earth.

It all began with an innocent walk in our neighborhood.  Duke was fussy after dinner so I thought we'd kill some time before his last feeding.  (Duke is hardly ever just fussy for no reason and he's done this the past couple of evenings.  Could his first tooth be making its way in?) 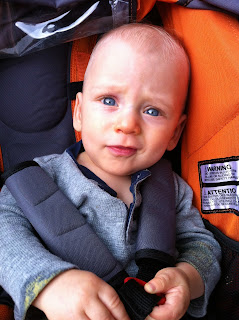 We were enjoying the nice weather and crazy looking sky when Colt decided to check the radar on his phone. 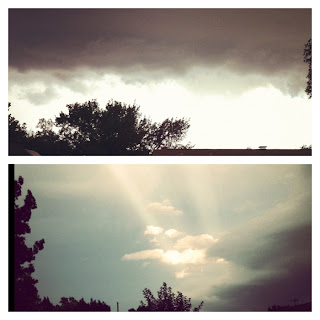 He showed it to me and said, "Huh, it looks like these two storms are going to come together right over us."  I began to walk faster and told Colt we needed to hurry.  Of course Colt is Mr. Relaxed in unstable situations.  (I feel like most guys are like this and they're only like this to get on our nerves.)  We got back to the house just in time.  The sky was getting dark and just about the second we stepped inside it started to rain.

We turned on the news and in no time, it was hailing. 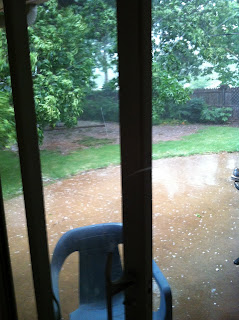 I wanted to go give Duke a bath but I was too much of a nervous wreck so I just held him, bounced him, and threw him in the air to pass the time.  After hearing my panting (half from the exercise I was getting and half from my anxiety), Colt insisted on taking Duke.  I refused.  One of us has to know when the storm is going to blow our house away and the directionally challenged one should not be in charge of that.

So I breathlessly held Duke and Colt listened.  I kept demanding that we go across the street to the shelter.  (The old lady that lives in the house said we were always welcome to use it because she won't be.  Colt asked what she would do and she said something along the lines of, "Oh, I'll just stay in here.  I'll be fine.")  Colt wanted to stay in our house and watch the weather until we absolutely needed to take shelter.  This makes sense but I can't think logically when severe weather comes around.

Feeding time had come so I started nursing Duke.  About 5 minutes in, Colt said we should go.  I put myself away and off we went.  Duke was rudely interrupted while eating and then had a rain jacket thrown over him.  He was pretty confused.  Then Colt opened up the door to the shelter and it made a horrible creaking sound.  At that, Duke started to scream.  Once we got down there, he was fine. 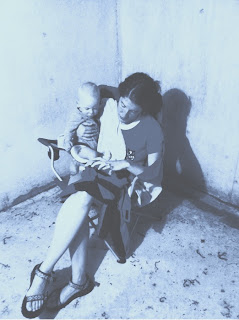 Good thing he had no idea the floor was covered in dead worms. 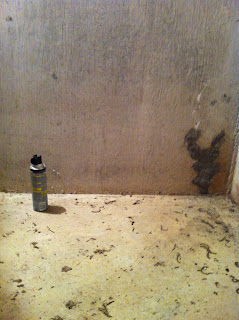 I finished feeding down there and about 20 minutes later, we walked back across the street to our home. 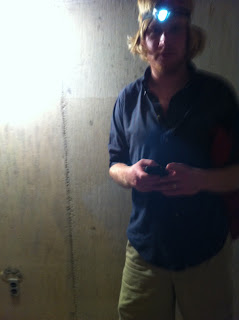 Severe weather is a different animal when you throw a kid in the mix.  Suddenly you become irrationally dramatic and feel like you're in a Lifetime movie.  But we all survived.  We weren't left with any broken windows or windshields ... just this: 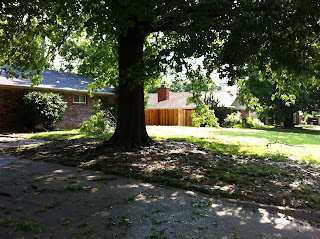 That hail was crazy.  And I'm not looking forward to round 2 tonight ...
Posted by Claire at 9:47 AM