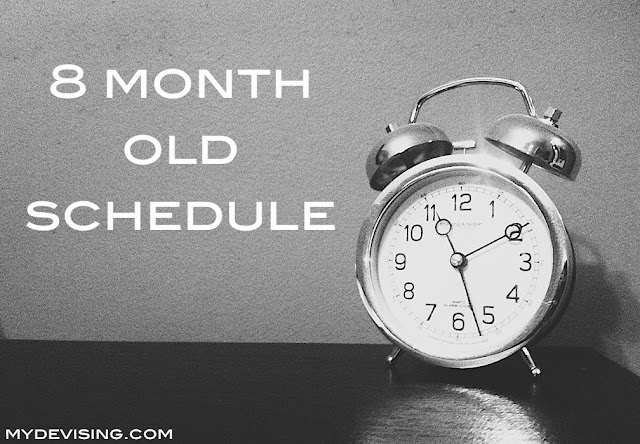 I was convinced that most parents ended their days by sitting on the couch, sipping coffee, and taking part in lovely conversation after the kids were put to bed.  I thought, wow, that must be nice.  Well, folks, I am now those people!  I mean, it's not always that dreamy sounding.  Sometimes we just sit and watch the news.  And you know how exciting Oklahoma news can be.

But from someone who never thought a decent bedtime was possible (due to Duke's legitimate spit-up problem), I'm telling you that it will happen.  Putting him down at the end of the day and enjoying Colt by myself is really nice.  It's something I look forward to.

Each month's schedule is better than the last as you drop naps, drop feedings, and/or extend waketimes.  Here's what we're doing:

Duke's morning nap is usually 2 hours, give or take a bit.  If he sleeps 2.5 hours I go ahead and let him. Then my next feeding is just a little bit later than usual.  His afternoon nap is usually 1.5 hours.  If he sleeps 2 hours, I let him and I adjust his next feeding accordingly.  After that, we pretty much stay on schedule the rest of the day.  His catnap usually ends up being 45 minutes to 1 hour.  This nap is also one that can be done successfully in the car or in the stroller while we're walking.

Waketime before his first 2 naps is 1.5 hours.  Before the evening catnap, his waketime differs.  Sometimes after 1.5 hours, he's ready.  Sometimes he'll last 2 hours.  I just follow his lead.

Next on the agenda will be more changes in his meals.  We can start introducing little finger foods and I can definitely tell he's ready for something a little chunkier than pureed stuff.

For now, I'm loving a pretty spaced out schedule, long naps, and earlier bedtime!
Posted by Claire at 9:21 AM