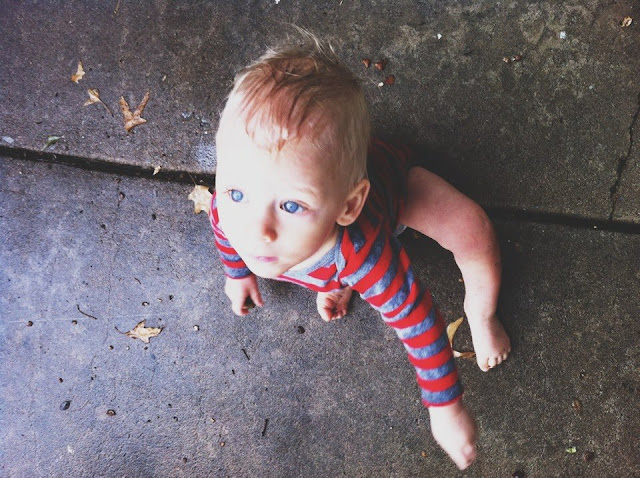 Well, I'm about 3 weeks into this whole weaning thing.  It has gotten much easier ... for both of us.

I knew it was time to start weaning due to several things Duke was doing and how my own body felt.  But getting it right was hard.  For me, the transition was more of an emotional issue than a logistical issue.  It wasn't necessarily emotional in the sense that I felt I was "missing out on bonding time."  It was more of an "I don't know what to do" emotional issue.  (The theme of motherhood, it seems.)

For me, figuring out how fast/slow to wean, what feedings to cut first, and deal with the silly "mom guilt" that goes with it all put a lot of pressure on me.  But for Duke, it was just a logistical issue of Am I getting you or a bottle?  Now, he's really adjusted well to both nursing and taking formula out of a bottle every day.

After a few days of replacing the late afternoon feeding (3:30-4:00) with a bottle, there were still some problems that needed solving.  The waking in the night and making noise was still happening and the waking earlier in the morning was still happening.  My instincts told me I needed to replace another one.  The dinner feeding (6:15-6:30) was the next to go.  Immediately after doing that the sleep issues were no more.  I do really think it was a calorie issue and Duke just needed more.

As far as pain goes, I haven't experienced any.  Zero.  It's been a gradual, natural process and I've taken it slow.  So if I have one suggestion, it's to do exactly that and really listen to your body.  Along with that, if you're an avid pumper and want to wean, you may want to start preparing your body sooner and allowing even more time for the entire process.  Prior to weaning I pumped once a day after Duke's morning feeding.  However, I was definitely okay with missing a pumping session if I needed to be somewhere or just wasn't in the mood.  (But really, who is ever in the mood to pump?)  I think this has benefited me in the long run.  I haven't had any discomfort and I haven't pumped once.  After all, what's the point of feeling "free" from breastfeeding if you're still having to pump a lot?

On Monday I suddenly decided to stop nursing for the lunch feeding.  I literally walked in the door from my MOMs group and said out loud to myself, "I just don't think I have anything in there."  So, there you go.  I'm down to nursing twice a day, breakfast and bedtime.  No one is more shocked at this whole "nursing until he's a year" thing than me.  I can't believe it is actually happening!
Posted by Claire@MyDevising at 9:19 AM