Sunday morning, I woke up exhausted.  I'd probably only slept a total of 30 minutes the night before due to my sore/itchy throat.  This wasn't a good way to start the day.  But because running is practically 100% mental, I put my running stuff on, laced up my shoes, and ate my pre-race breakfast (a cliff bar and a banana). 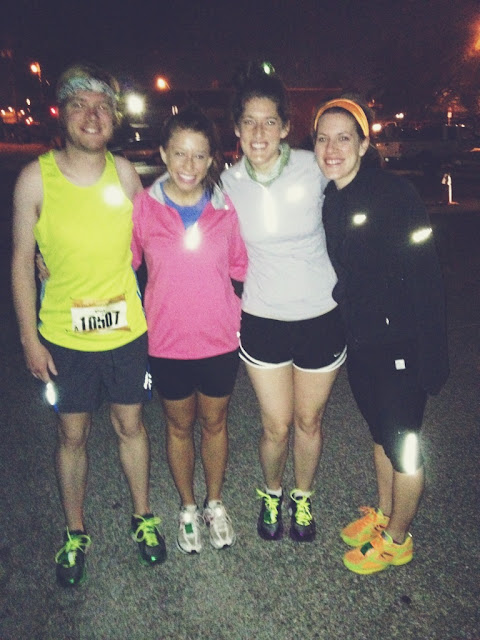 We arrived downtown around 5:45 a.m.  We huddled together to fight off the teensy chill in the air and before we knew it, we were crammed into the crowd of the start line.  I looked over and happened to see my MOMS bible study teacher.  So I got one last pre-race photo. 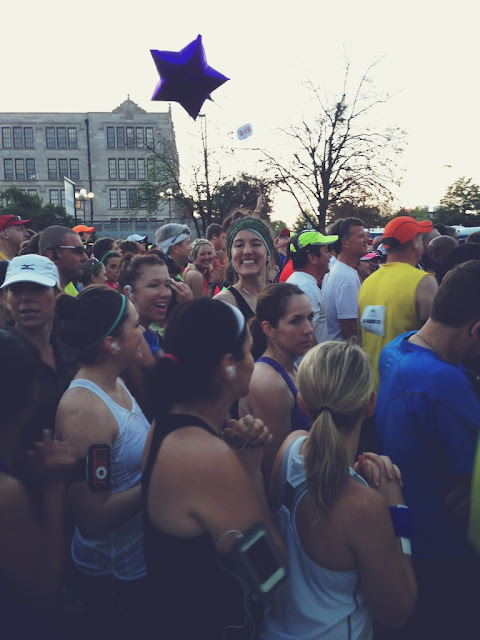 At mile 3, I felt very settled.  My pace was consistent and I was on my way to accomplishing my first goal in the race:  finish the first 5 miles within an hour.  At mile marker 5, I looked down at my watch and it said 57 minutes.  Yes! 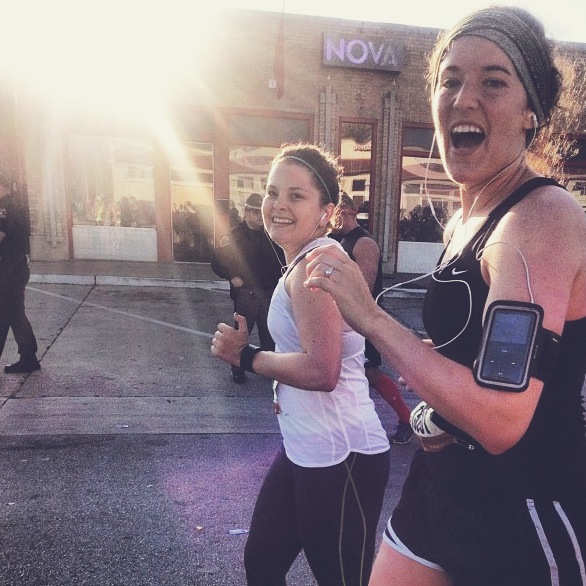 By mile 6, I felt great.  Then, I saw Sara at her usual spot on Western and got an extra boost of energy.  Seriously, you people that cheer, make signs, sit on your porch drinking coffee, track us on your iPhone apps, hold out your hands to give high fives - all of you are important.  And we all love you.

(Side note:  Sara was in her spot at the race talking to Reese on the phone who was at home tracking my bib number.  Quite a pair of best friends I've got. :))

I was relieved to have hit my 5 mile goal earlier than planned because around mile 9, I started getting tired.  I felt my legs getting heavier and I was frustrated that I felt this way before even getting to mile 10.  But luckily, I made my second goal in the race:  finish 10 miles by 1:55.  I was on my way to demolishing my previous year's time.

But after that, something just switched off.  It got so incredibly hard.  I can blame it on the sun coming out or my lack of sleep or my sore throat.  But no matter what the cause, I was slowing down.  Way down.

I was pushing as hard as I could and I felt like there was nothing left in me.  I kept running and when I finally saw Broadway up ahead, I was relieved.  Like last year, I knew that if I wanted to beat my previous time, I needed to pick it up.  It took my legs awhile to receive this message from my brain.  I turned onto Broadway and it wasn't until I saw the word "FINISH" that my legs started moving faster. 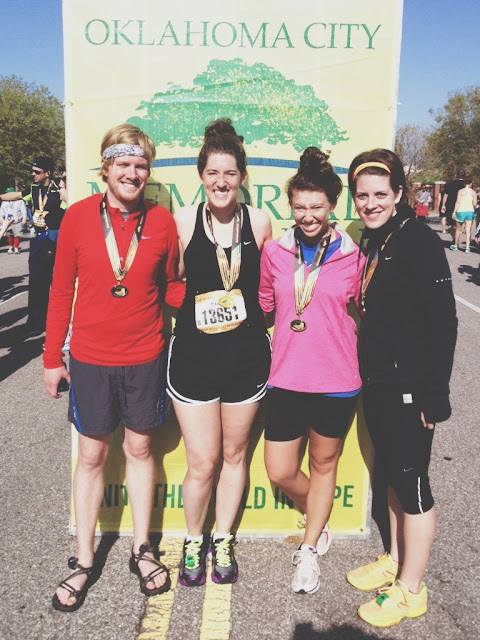 My lofty goal for this half was 2:25 and my real goal was around 2:30.  If I would've just bumped my pace up to 11 minutes at mile 10, I could've finished under 2:30.  If, if, if.  I've been running these "ifs" through my head ever since the race ended.  Even though I finished 2 minutes and 33 seconds faster than last year, I was slightly disappointed.  Yes, I definitely wanted to beat my time last year, but I was hoping to shave off more than that.  Part of me thinks I could've pushed harder and part of me thinks I pushed as hard as I possibly could.  Either way, it has driven me to run another half.  And not just my annual OKC Memorial half.  I mean, soon.  I want to prove to myself that I can do it in 2:30.  Right now, the Route 66 Marathon in Tulsa is in my gaze.  I will conquer!

But more than PRs and sore muscles, I'll come away with something unique this year.  In the minutes it took me to approach the finish line, it felt like I did hours of thinking.  The sides were packed with spectators.  People were here to celebrate friends, family, and complete strangers even though this very scene was full of tragedy just 2 weeks before.  People refused to be cornered by the senseless acts of two young guys.  Fear would not define them.  It really was inspiring.  In that moment, I was so proud to be a runner and an Oklahoman.

Any other fellow OKC Memorial marathoners out there?  How was your run?
Posted by Claire@MyDevising at 8:32 AM