Last year I posted my half marathon playlist and, I'll be honest, this year's playlist isn't that different.  Who's going to take "Semi-Charmed Life" or "Bittersweet Symphony" or "Lose Control" off of a running playlist?  Nobody with ears.

But while there are lots of repeats, there are a few new additions. 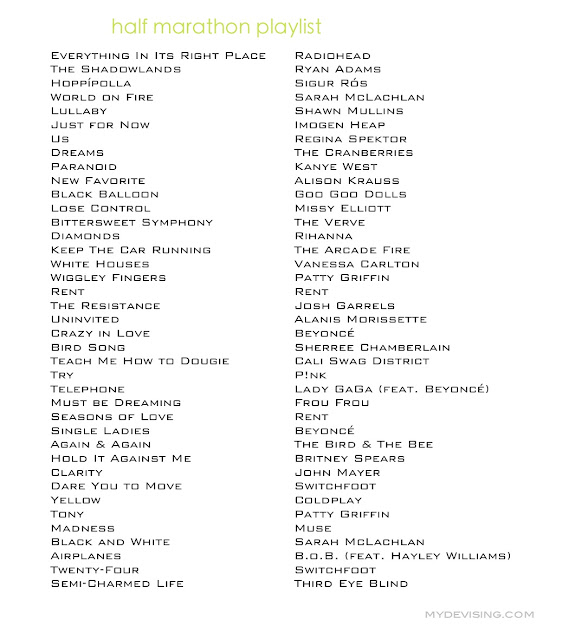 Like I said last year, this list is strategically planned.  Calm ones for the first few miles and then I start sprinkling in some pick-me-ups, like "Paranoid."  After that, the majority of the songs are fairly upbeat.  If I remember correctly, after "Madness" I could tell I had time for one more song, so I quickly skipped to "Semi-Charmed Life."  I just had to end on that.

The award for "Most Shocking Addition" goes to Pink.  I don't have a problem with Pink, but I do typically have a problem with her songs.  Her voice is so much better than the crap she sings.  "If you're too school for cool"?  Really?  She's better than that.  But one of her recent hits, "Try," is actually pretty decent.  Decent in a I-think-I-just-might-like-it kind of way.  Decent in a I-don't-change-the-station-when-it's-on kind of way.  And when you're running, sometimes you just need to hear, "But just because it burns doesn't mean you're gonna die."

The award for "Best Addition" goes to Muse.  "Madness" is one of my favorites right now and it's such a great running song.  Besides, there are so many fun rhythms you can tap along with in your fingers.  No?  Nobody else does this while running?  Blame it on my deep desire to be a drummer.  I found a lonely drum set at a church my parents were singing at one time.  My 4th grade self sat down and immediately played bom bom bum ba-da-ba-da-bom bum.  (Some of you know exactly what rhythm I'm talking about.  If you don't, just know it's the most generic thing a drummer could ever play.  Besides "George, George, George of the Jungle.")  But anyway, back to the song.  It's really awesome and I love singing, "ma-ma-ma-ma-ma-ma maa maa maa."

Do you guys have any of the same songs in your running mixes?
Posted by Claire@MyDevising at 9:23 AM