my real half marathon training schedule 2013

I decided at the beginning of my training this year that I would record every run/workout I did and at the end, I'd post it for all of you to see.  Not to show how awesome I am; actually the opposite.  I want to prove to you that training for a half marathon really doesn't take as much time out of your week as you may think.  Also, you don't have to be a "natural athlete" to run 13.1 miles.  Anybody can do it! 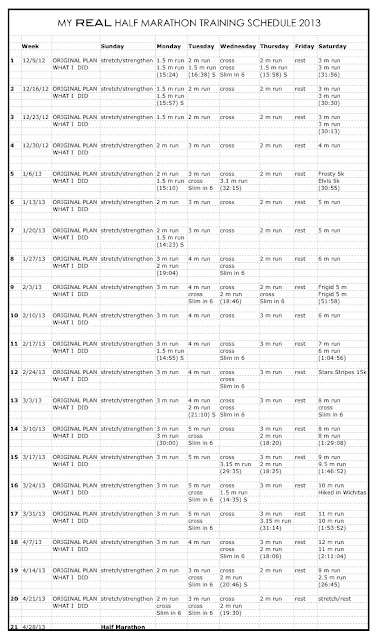 (By the way, wherever you see an "S," that means I ran with the stroller.  Also, my times for each run are listed in the parentheses.)

Here are the responses I'm expecting:

But you were an actual runner before those 20 weeks and I'm not.  Sure, but do you remember how often I was running prior to those 20 weeks?  Like never.  Yes, I've been officially a "runner" for probably 3.5 years now, but the months leading up to training, I was not consistent.

Wow, if you can do this, anyone can.  Ding, ding, ding!  That is the correct response!  So, no more excuses.   No more "I don't have time" or "I'm just not a runner" or "I can't run longer than 5 minutes" or "But you don't understand."  You have time, you can be a runner, you can run for way longer than 5 minutes, and I do understand.  So get out there and run!  (And then tell me about it because it'll make me feel all warm and fuzzy inside if this post inspired you.)

I'll leave you with this.  These are my two pieces of advice on training for a half marathon:

1. GIVE YOURSELF A BREAK.  Don't be so hard on yourself.  If you miss a run here and there, that's fine!   If you notice, my Sunday slots are blank next to "what I actually did."  That's because that's what I did.  Nothing.  I never stretched and I never strengthened on Sundays.  Shame on me, I know.

2.  JUST DO SOMETHING.  On week 13, I was going to run 7 miles.  But you know what happened the night before my long run?  I got in bed around 9:30 p.m. to get in a good amount of sleep.  Then it took me 2 hours to fall asleep.  Then I woke up several times throughout the night to random noises in the house.  It was so annoying and Colt totally had to pay for it.  (It's a really special talent we wives have - blaming everything possible on our husbands even when it has absolutely nothing to do with them.)  Anyway, it was bad, I was mad, and there was no way 7 miles was going to happen at 6:30 a.m.  So that morning, I got up and did my 23 minute DVD of Slim in 6.  Totally not the same as running 7 miles, but at least I did something.  And you know what?  That's the theme of exercise in my opinion.  Just do something.

Have I totally convinced you to run a half marathon now??

Posted by Claire@MyDevising at 3:46 PM