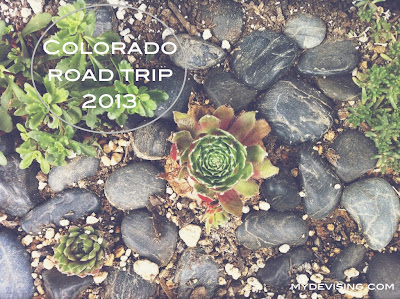 A few weeks ago, Reese, Sara, and I took a little road trip to Colorado to visit our sweet friend, Laci.  You've heard plenty about Reese and Sara, but you haven't heard a ton about Laci - mostly because she lives in Colorado.  (Thanks a lot, Gabe.  Ahem.)  Anyway, after a series of unsuccessful attempts to meet up with her this summer, we decided we'd just go to her.  Even better?  We decided to surprise her.  Reese worked with Gabe to find a perfect weekend for us to come invade his home and make him wish he'd never said yes.  Only half kidding.

So, here's a little belated recap of the trip: 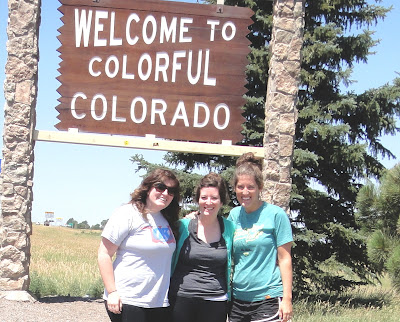 It was a long drive there but it seemed to go by pretty quickly.  Sara interjected every hour or so, "I hope she doesn't know we're coming!!!"  We just love surprises.  Well, Reese hates them, but she likes being a part of them.  So that still counts. 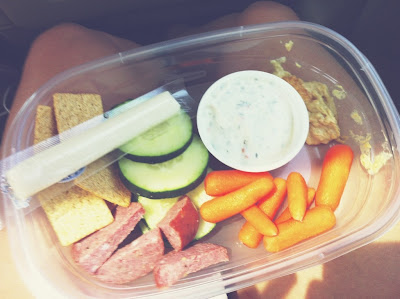 Our car was full of snacks so we only stopped for gas and potty breaks.  We listened to a lot of Wake Up with Taylor and talked about things we've probably talked about at least 46 times before.  But there's always something new to say, right?  Right.  That's why I love Wake Up with Taylor so much.  She just rehashes and rehashes and rehashes.  And if you don't know what I'm talking about, you probably don't have XM radio.  Neither do I.  But that's why you need to at least know someone with XM radio - especially for long road trips.  It's incredible.

Another thing that kept us entertained for far too long was Miley Cyrus.  Sure, her appearance is enough to discuss - the hair, the lack of clothes, etc.  But that can all be swept under the category of "self-expression."  No real drama there.  Sure, her 100% auto-tuned voice is annoying.  When she sings, I literally feel like I'm listening to a computer.  Not a girl who sounds like a computer, but an actual computer.  However, practically everyone uses a little bit of that auto-tune business, so I suppose we're all at fault.  But her latest video for "We Can't Stop"??  Now THAT is something to discuss at length.

If you've watched it, you know that the verbal responses to everything happening in the video are either "What??" "Oh my gosh." or "That's disgusting."  And as far as the words are concerned, I'm considering doing a line-by-line lyrical analysis of that song just for kicks and giggles.  It is ridiculousness in its most intense form.  Anyway, all that to say, Miley kept us very occupied for a long while. 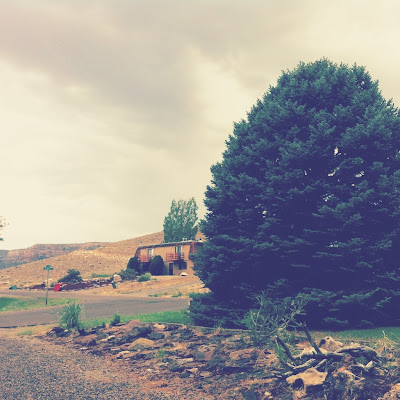 We left that morning at 5:00 a.m. and arrived at the Wilkins' home around 6:30 p.m.  As quietly as possible, we walked up to the door.  Gabe opened it and there Laci was, in the kitchen, in total disbelief.


I LOVED it.  I could live in surprises.  They're just so fun!

After we all settled down, we decided to go grab some dinner, greasy car faces and all. 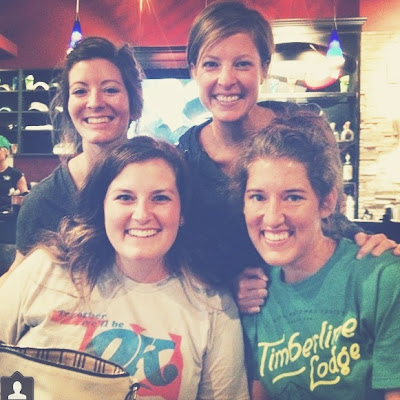 To give you some background information, Gabe and Laci are pretty adventurous people.  I'm going to be positive and assume that having 3 girls come visit you who just want to eat and shop is maybe a nice change.  Right?  I mean, I don't know what it's like to want to climb mountains and snowboard and do whatever it is that mountain-people do.  But we certainly didn't do it.  We ate at some really yummy restaurants, shopped at the Gap outlet and the Goodwill, got pedicures, played Buzz Word, and watched a lot of HGTV.  Because you can't do any of that in Oklahoma. 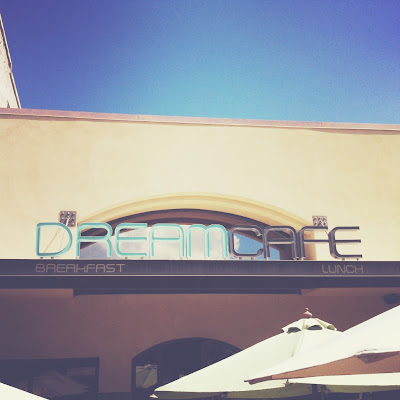 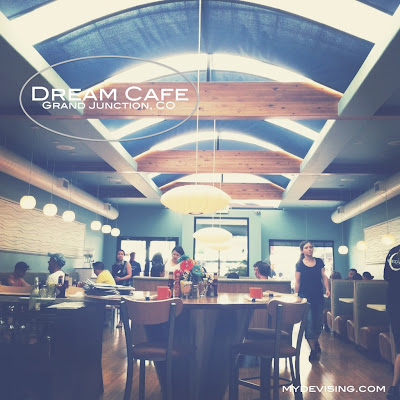 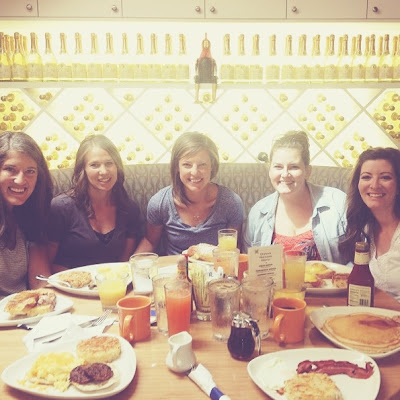 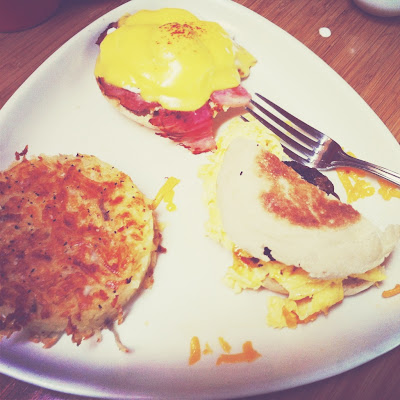 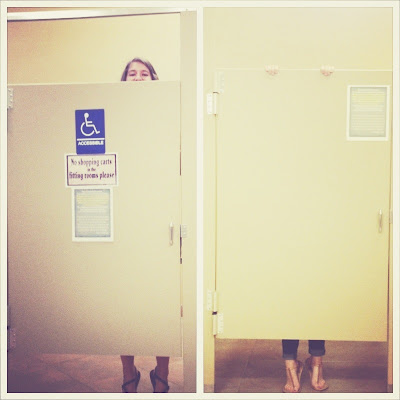 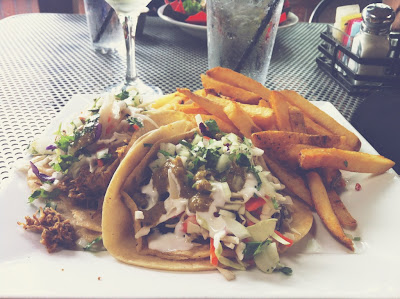 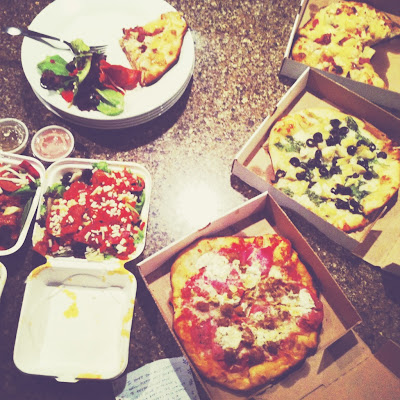 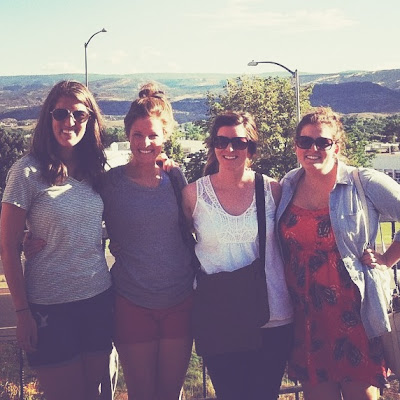 After 2 days of non-Colorado things, we figured we'd better do something our husbands would be proud of.  So we decided to drive to Telluride on our last day.  (I had to ask how to say/spell that word probably 10 times.  Weird word.) (It was a quaint little place in which I called "village-y" and Gabe replied, "Yeah, it's a village."  Hm.  I guess that's why it looked village-y.)

Our Telluride day was also my birthday.  So I woke up to many birthday surprises - streamers and balloons, a chocolate sprinkle donut, a delicious breakfast, and Laci's fancy juicing skills. 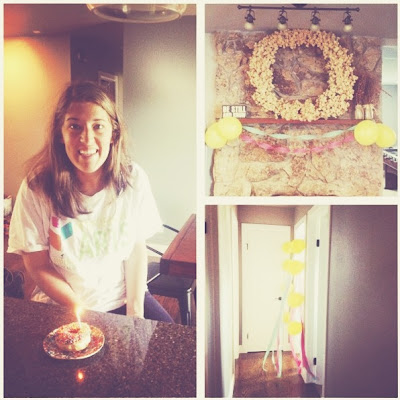 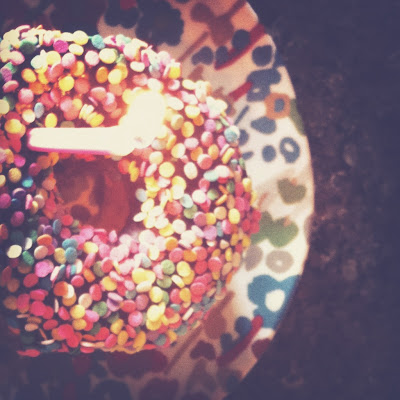 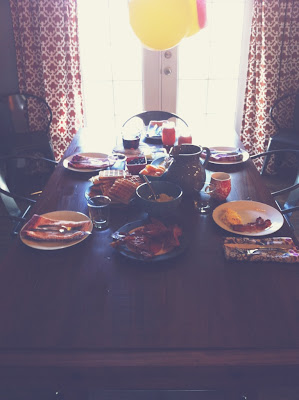 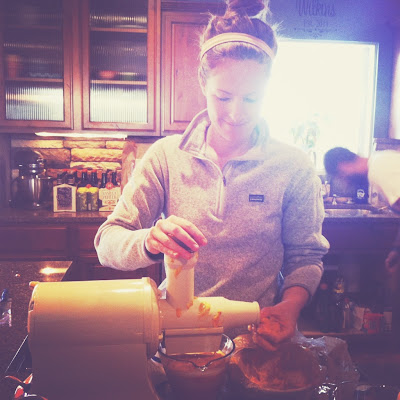 The road trip to Telluride was full of singing.  We sang and sang and made sound effects and sang.  We kept apologizing to Gabe, but we didn't care enough to actually stop.  It was way too fun!

At one point, I think I referred to us as "his girls."  I'm not sure he was too fond of that term, but he totally went with it.

(I know, I'm giving Gabe a hard time in this post, but it's all out of love!  Truthfully, he was such a trooper.  He listened to all of our versions of Usher, Destiny's Child, Mariah Carey, and TLC tunes without throwing us out of his car or his house.  That in itself is an accomplishment.)

Once we got there, our time consisted of walking around, drinking coffee, shopping, and riding the gondola. 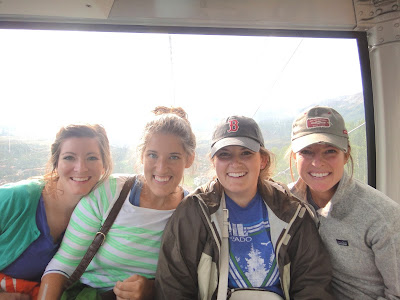 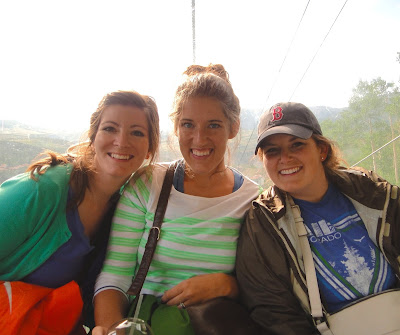 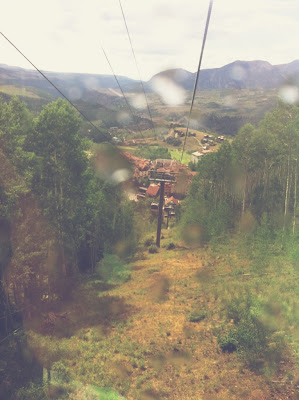 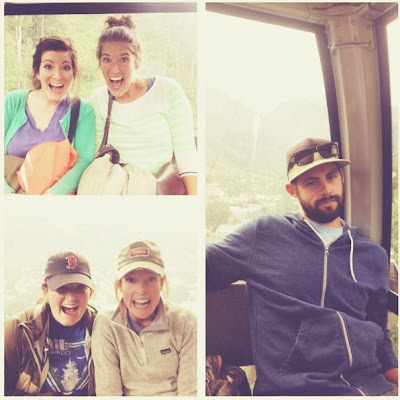 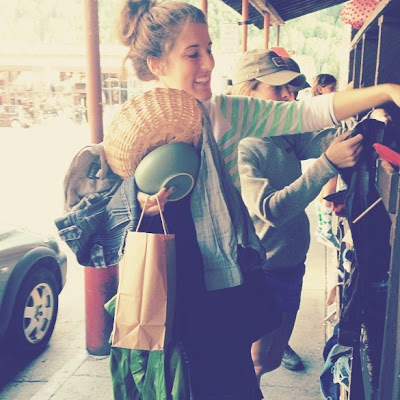 (You may not want to be around when I'm at the free bins in Telluride.  I will embarrass you.)

I had a lovely time with my friends.  One of the daily highlights was getting ready in the same bathroom while singing Beyonce's "Check On It." 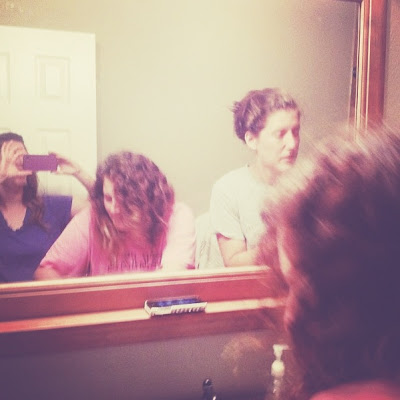 It was so needed and was so relaxing to just exist without wiping faces, changing diapers, and getting home in time for naps.  In the words of Miley, "It's our party, we can do what we want to!"  And we did.  We did whatever we wanted to do whenever we wanted to do it.   We also shouted, "This is our house, this is our roof!" at random times throughout our stay in Colorado.  (We know it's "rules," but it makes us feel like we're filling our role of being old-er and disconnected from the top 40 hits if we mess up the lyrics.  Plus, "roof" is funnier.)

However, I will say I missed my two boys so much even though I knew there were getting some good father/son bonding time in.  My heart was aching for them.  When I pulled in the driveway and saw them both outside waiting for me, my heart nearly exploded.  I've been away from Duke several times before, but this trip (5 days) has been the longest.  Holy moly, it was long.  His little voice had changed a bit and he had learned new words.  5 days is a long time in toddler-land.  Hard to imagine being gone any longer than that! 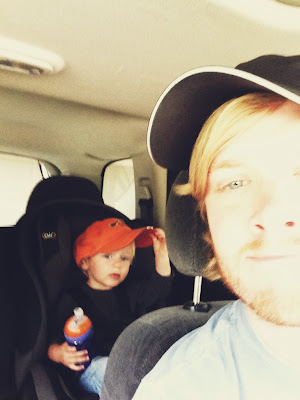 In summary, it was the perfect trip.  Special thanks to Gabe who had to lie to Laci a million times to keep all of this a secret.  Truly, you are the perfect partner for her and I loved seeing you guys interact on a day-to-day basis.  I love you girls and I will always have such special memories of this trip. 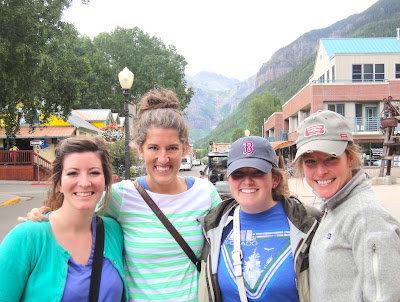 Posted by Claire@MyDevising at 9:01 AM