I have been MIA from blogging due a stomach bug that has taken over my household.  It has been g-r-o-s-s.  Thankfully, Colt and I were the only ones hit.  Duke seems to be just fine.  Anyway, I've been wanting to do a little recap of Duke's first day of Mother's Day Out last week, so here it goes. 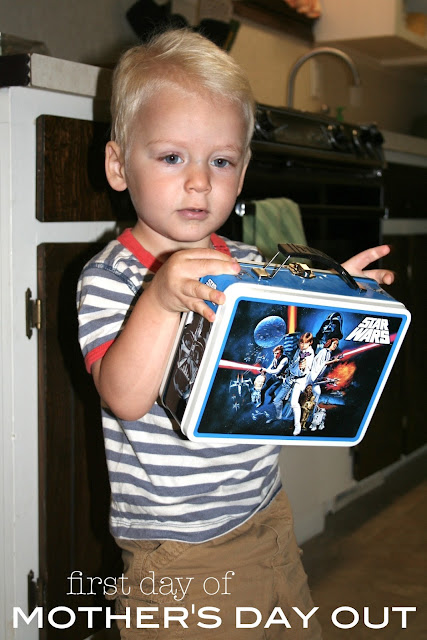 For starters, I was pretty emotional already because the previous 3 out of the 4 weekends, we'd been out of town and Duke had been with grandparents.  I was genuinely missing my boy.  But I wasn't going to skip.  I said I would do this, I committed, and I didn't want to miss the first day.  I don't miss the first day of anything, dang it.  (Except that I missed the first day of MOMS group this Monday due to lots of throwing up.  I guess that's an acceptable reason though.)

I woke him up at 8:30 and tried to non-suspiciously get him to eat quickly.  But aren't the children so funny?  Duke always knows when I'm trying to get him to hurry and do something.  I tried really hard to play it cool.  Like, "Hey, Duke.  It's kind of time to eat breakfast, but it's okay if you don't want to yet.  I mean, I'm cool with whatever you choose.  But here it is.  It's on the table.  Oh, you want to take your time?  That's great, it's whatever.  Okay, let's think about trying a bite now.  EAT YOUR FOOD OR I'M GOING TO SHOVE IT IN YOUR MOUTH!"  I really didn't say that last part, but that's what my insides were screaming.  Breakfast took a while and we really needed to G-O.  Starting his first day of MDO with an empty stomach was not my ideal plan for the day, but that's pretty much what we were looking at.  After 6 bites of oatmeal and 1/4 of a banana, we called it good.

I tried to capture some sweet pictures full of smiles before we left that day, but Duke wasn't in the mood.   (It's okay, Duke.  Your mom doesn't really like to smile before 10:00 a.m. either.) 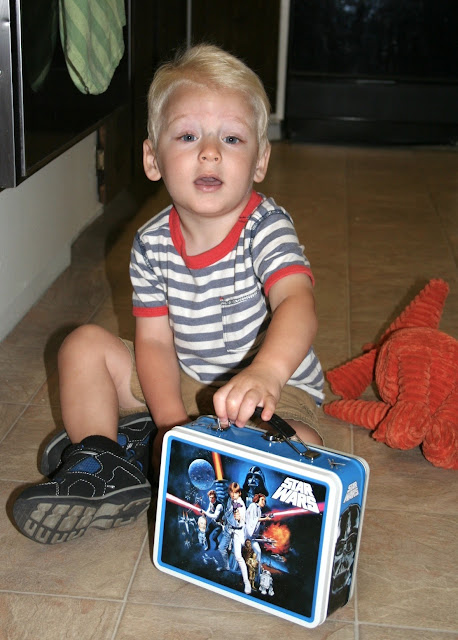 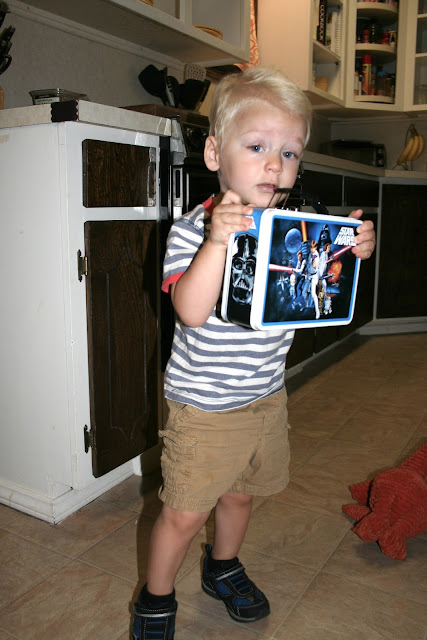 Luckily, we arrived to MDO early as planned.  What I didn't know is that you can't get into the rooms until 9:30 on the dot.  Why did I come early again??  So all of us, with our millions of kids, stood around, corralling toddlers from not pushing handicapped buttons on doors, running down hallways, etc.

Finally, doors opened.  We nervously walked down the hall until we arrived at Duke's room.  The teacher opened the door.  Duke walked in on his own with confidence and with his giraffe in hand.

I backed away from the door and hung around until the rest of my friends were done dropping their kids off.  I was fine and unemotional until Kelsey choked up and said, "I just want them to like it."  Then it was over.  I fought back tears all the way to my car.

And then I bawled the whole way home.

All of these questions (and more) were swirling through my brain.  The only things that kept me from racing back to get him were 1 - This is going to be great for his social skills and development // 2 - This is going to be great for me to be able to teach a couple of lessons and get some things done. // 3 - We already paid for this so there's no way I'm flushing that money down the toilet.

When I gave birth to this crazy kid in October of 2011, I could've never imagined packing a lunch in his Star Wars lunchbox and watching him walk into a classroom of 2 year olds.  Never.

(P.S.  Thinking about kindergarten makes me want to throw up.)

But the time has come.  And although I would give just about anything to hold sweet baby Duke again for just 5 seconds, I love who he has become.  I love this age and I love his little personality.  Watching a little boy grow is such a gift.  Even if it means taking him to Mother's Day Out. :)
Posted by Claire@MyDevising at 8:26 AM