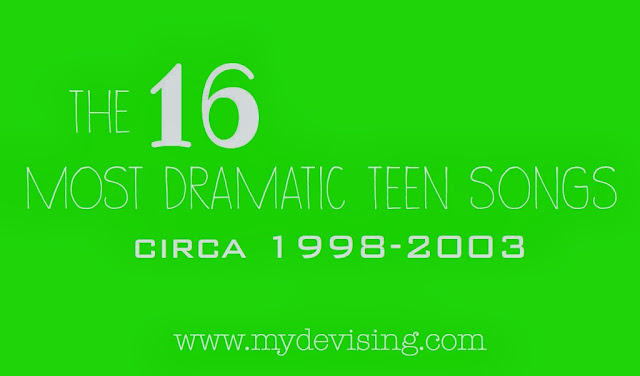 Melanie over at Big Mama did a post a few weeks ago about her top 10 most angsty songs she lip synced as a teen.  I read her list and loved it.  I decided it would probably be best for me to copy her and write one of my own.

To be clear, we're going to stick to ages 12ish-17ish.  You know, the extra dramatic years.  For those of you that want to know where that falls for me, we're talking 1998-2003.  (And for you rule followers and fact keepers, I'm pretty sure there may be a song or two on this list that came out before 1998.  But who says I couldn't still be emotionally attached to them years later?)

Although I can't really be accused of the whole hairbrush-as-a-microphone thing, I can be accused of plenty of horrible dance moves and embarrassing faces made in the mirror above my dresser.  There was an abundance of that business going on.  I didn't need a mic, y'all.  As if.

Also, like Melanie said, there's no way that a comprehensive list of all of these songs could be made.  No time for that.  So, I'm giving you the first 16 songs that pop into my head, which is way more dangerous than actually thinking them through.  (Why 16?  Because I just couldn't stop at 10.)  Here we go:

1.  My Heart Will Go On // Celine Dion
This has to be on every girl's list.  It's just so good.  And nobody can resist that key change.

2.  I Love You Always Forever // Donna Lewis
A breathy voice, easy lyrics, and a repetitive melody made for the perfect pop hit.  It sucked me in from day one.  Oh, Donna.  You're only one that can sing, "Never stop, never whatever," and it not sound stupid.

4.  Semi-Charmed Life // Third Eye Blind
My love for this song runs deep.  I've gone through so many lyric changes as I've gradually understood more and more of the words coming from Stephan's mouth.  But don't worry, I still don't have them all.  Actually, I've never looked them up on purpose.  I want to keep singing my version.  Maybe someday I'll post them for you.

5.  Show Me Love // Robyn
First of all, anyone whose name is Robyn spelled with a 'y' is awesome.  The bridge of this song is still one of my favorite bridges of all time.

6.  If You're Not the One // Daniel Bedingfield
Someone please tell me why this guy is not famous still.  And please, someone tell me you were just as in love with this song as I was (am).  His voice is like butter, the melodies are lovely, and the words are exactly what my teenage heart wanted some guy to say to me.  If you haven't listened to this song in a while, do it now.

8.  God Must Have Spent a Little More Time on You // N'Sync
N'Sync must have also spent a little extra time on naming that song.  I mean, gah lee, how long does a title of a song have to be??  And if you just say "God Must Have Spent" it sounds dumb.  So it's either all or nothing.

9.  Frozen // Madonna
Perhaps this was a favorite song of mine during the same time of life when my parents were worried I was turning goth.  Guys, I don't know why, I just liked wearing black.  I made no connection to the other kids in my middle school that also loved wearing black while doing really inappropriate things.  Like smoking cigarettes, wearing too much eyeliner, and painting their nails black.  I was oblivious.

11.  Bring Me to Life // Evanescence
Threw you for a loop on this one, huh?  My high school boyfriend got in my car one night and had his ears blasted off by Evanescence when I turned the key.  He said something like, "This is the last genre of music I would've ever expected you to like and listen to."  And he was right.  It was a bit off my musical map.  But who can resist shouting, "I can't wake up!!"?  No one.  No one.

12.  A Thousand Miles // Vanessa Carlton
Vanessa changed my songwriting life.  I was amazed at her ability to sound pop-ish but also classically trained at the piano all at the same time.  I loved learning the song on the piano.  And in the last 10 years, any time a piano is being moved or rolled anywhere, I run to it and play this song.  (If you're confused, then you've obviously never watched the music video.)

13.  Cowboy Take Me Away // Dixie Chicks
The amount of dances that were choreographed to this song by my sister and me is embarrassing.

14.  Love This Way // Eden's Crush
This song - on my Discman - on repeat - as I fell asleep.  I lived many a night like this.  If you need a refresher, this was the "band" (nobody played any instruments) that Puff Daddy (before the P. Diddy nonsense) created on "Making the Band."  I know Eden's Crush was short lived, but I would totally go see them in concert if they ever decided to put a reunion tour together.  But they totally wouldn't because Nicole Scherzinger is way too busy doing all of her ridiculous songs.

15.  All My Life // K-Ci and JoJo
At one point, I was dead set on this song being in my wedding in some form or fashion.  Unfortunately (or maybe fortunately), it never made the cut.

16.  Angel // Sarah McLachlan
Did you really think I'd get to the end of this list before talking about my favorite?  This song is perfect in every way and I still get a wonderfully magical feeling anytime I hear it.  Sarah knows how to write 'em.

What's on your list?
Posted by Claire@MyDevising at 8:19 AM