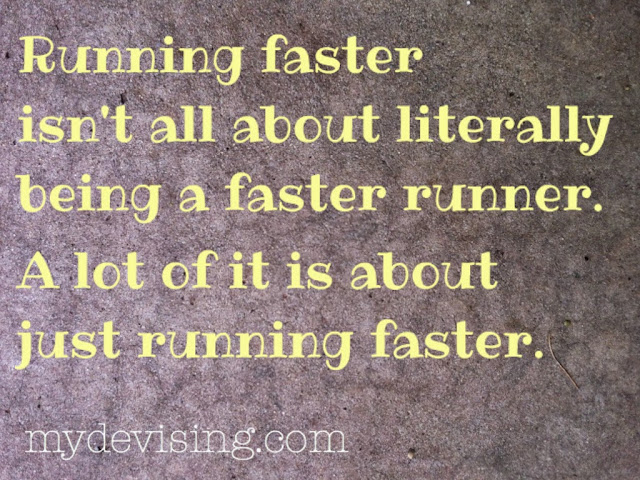 In the hopes of shocking my body with a new workout and continuing to work on my "fitness goals" (in other words, just being lean and a better runner and achieving my "goal weight" -  which I realize probably has the same stupid sound to it as Regina George's statement, "I wanna lose 3 pounds."  But y'all get me.), I enlisted my good friend, Kelsey, to help me.

At the beginning of the summer, I wanted to be a faster runner and it felt like I was kind of hitting a wall.  Kelsey made a plan for our first run together and we went for it.  Here's what we did:

(And just so you don't think I'm too awesome, there were walking breaks in between each segment.  I would've died without them.)

By the end, there were parts of my body that were hurting that I didn't even know could hurt from running.

While running that last .25 mile, I realized something.  This is why runners trip and throw up.  BECAUSE THEY'RE GOING TOO FAST.  I've heard stories about runners tripping during races or throwing up after a crazy run.  And now, it all makes sense.  My legs were like jello dangling from my body and my feet were mushy by the end.  These aren't typically the sensations I feel after running 3 miles at a 10:00 minute pace.

(For the record, I did not trip or throw up, but I came close to both.)

(But good for you guys that do run that fast on a regular basis.  Someone has to win all the races.)

We haven't run together in several weeks, but I've tried to stay active-ish with either running or Slim in 6.  As far as running is concerned, I'm definitely faster.  I've done 1 mile in 8:28 and 2 miles in 18:03 - my fastest ever for those distances.

But running faster isn't all about literally being a faster runner.  A lot of it is about just running faster.  Like making yourself run faster even though all you want to do is order a vanilla coke and cheddar bites from Sonic.  It's not like I'm a faster runner now forever and ever amen no matter what.  I will have to work on it with every run and with every distance.  I'm just really trying to push myself harder and harder to where faster is my normal.

At first, it was hard for me to see the benefit of working at my speed for such short distances.  I assumed that running a 9 minute mile for one mile wasn't going to help my half marathon time because we all know I'd have to slow down to an 11 minute mile to run that far anyway.  But you just work on little bits at a time.  First, one mile at a quicker pace and then gradually add distance while keeping that pace.

(P.S.  Kelsey has a totally awesome watch that calculates her pace as she's running.  I'm sure this is not news to you hardcore runners out there, but oh my gosh, I would totally be faster if I had one of those.  It'd be like a game to see how long I could keep up with a certain pace!  If you feel like contributing to the get-the-awesomest-running-watch-for-Claire fund, you just let me know.)

My first real taste of the pay off of these runs was my 4 mile run a few Saturdays ago.  To me, there is a big running wall in between 3 miles and 4 miles.  When you cross over, you're in.  You're a runner, you can run long distances, you can run half marathons, you're in.  That's how I felt at least.

I remember the first day I ever ran 4 miles.  It was in November of 2009 at Eldon Lyon Park on a Friday after teaching school.  (Told you I remembered.  I remember everything about everything.  I actually serve as the memory for many of my friends' lives as well.)  I was planning on running 3.5 (the farthest I had ever run at that point), but when I got to 3.5, I wasn't dead.  I was very surprised by this, so I just kept running.  I just knew I could do one more half mile.  That day, I felt like a half marathon didn't seem so impossible.  Maybe I could do it.

All of that to say - that wall still semi-exists in my head.  Not that I can't run 4 miles, but that I need to do it at a considerably slower pace or I will simply not survive.  But instead of treating that Saturday run like a 4 mile run, I treated it like I would a 3 mile run.  I started out at about a 9:30 pace, knowing (pretending) I could handle it.  I have this fear of running out of energy, but I convinced myself that I could do it.

I had run 3 miles and was starting my last mile.  I had slowed down a bit and I knew if I wanted to finish under 40 minutes, I needed to push harder.  Then I remembered the time I ran a mile in 8:28.  Surely I could muster up a 9something mile right now, I thought.  It's amazing how much of a mind game running is.  Sure enough, I conquered 4 miles in 39:45.  It felt amazing. 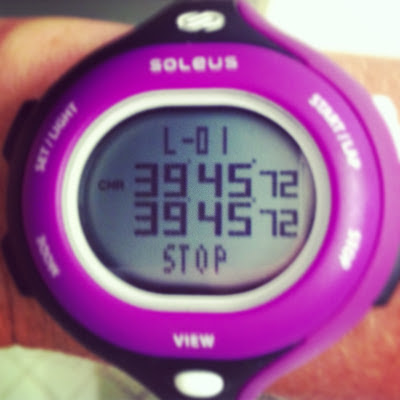 I don't ever expect to be ridiculously fast.  But running a 9:30 pace for a half marathon one day would be the coolest thing ever.  Heck, averaging a 10 minute pace would be awesome for me!  As for now, I'm working on maintaining a fast 2 miles and soon, I'll bump it up to 2.5.

How do you runners out there increase your speed?  Any tips or advice? 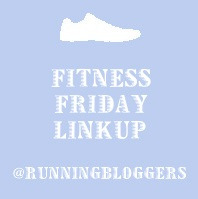 Posted by Claire@MyDevising at 9:19 AM