a letter to my freshman self

My Facebook news feed has been filled with OBU Welcome Week pictures and videos the past few days - some from the University, some from professors, some from friends I know that are attending.  I saw the Tri-Ws rock cars and move every piece of luggage into the dorms.  I saw the ridiculous run-in that lasts 20+ minutes.  I saw beanies on heads, Tri-W faculty dinners, and dorm rooms turning into homes. 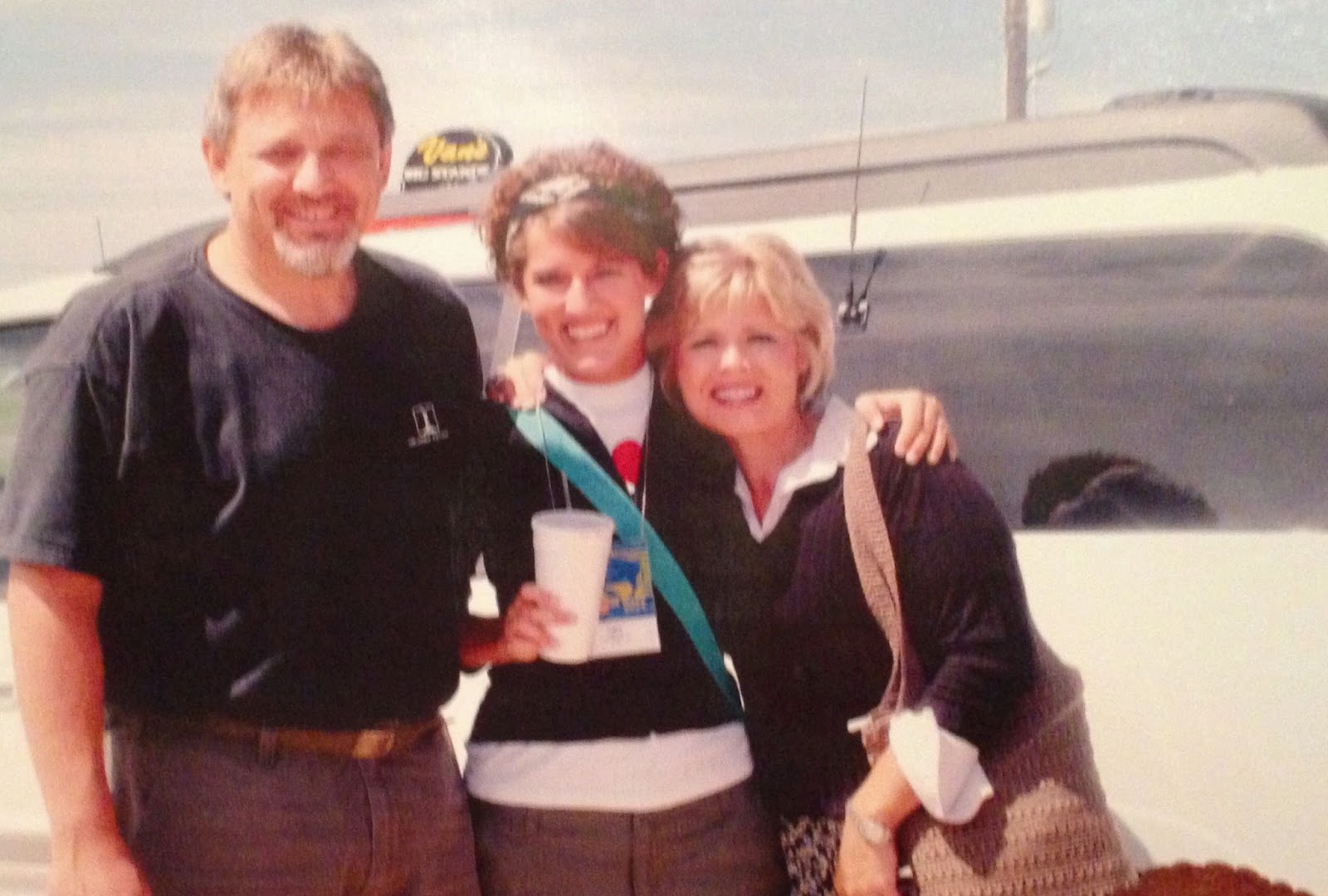 (Me and my parents on move-in day)

10 years ago, I woke up in a WMU dorm room (which we called our "box") that I shared with Sara.  We put John Mayer's Clarity album into our enormous CD player and got ready for our first day of college.  I was so excited to be in college, but maybe even more excited just to be out of high school. 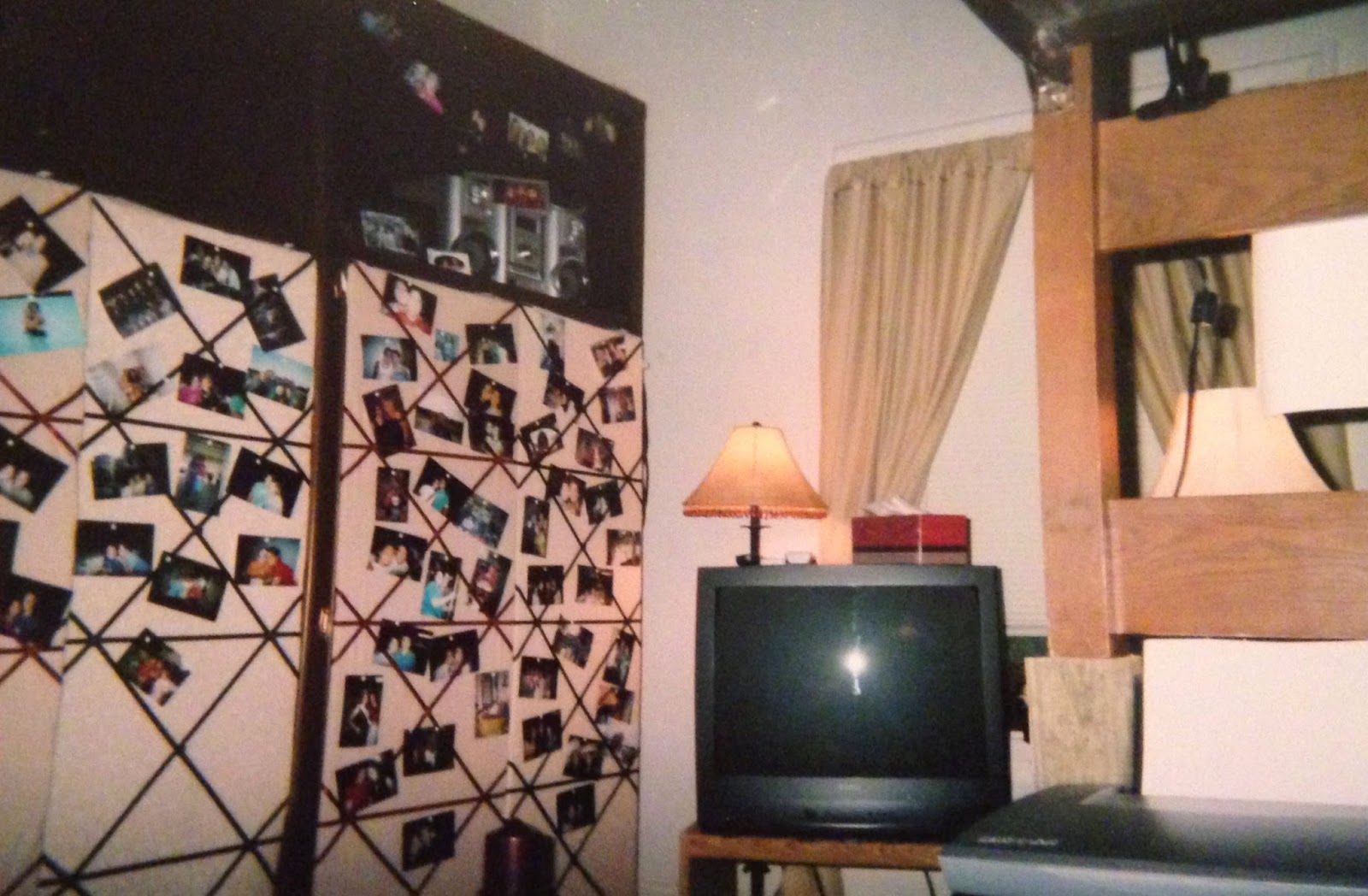 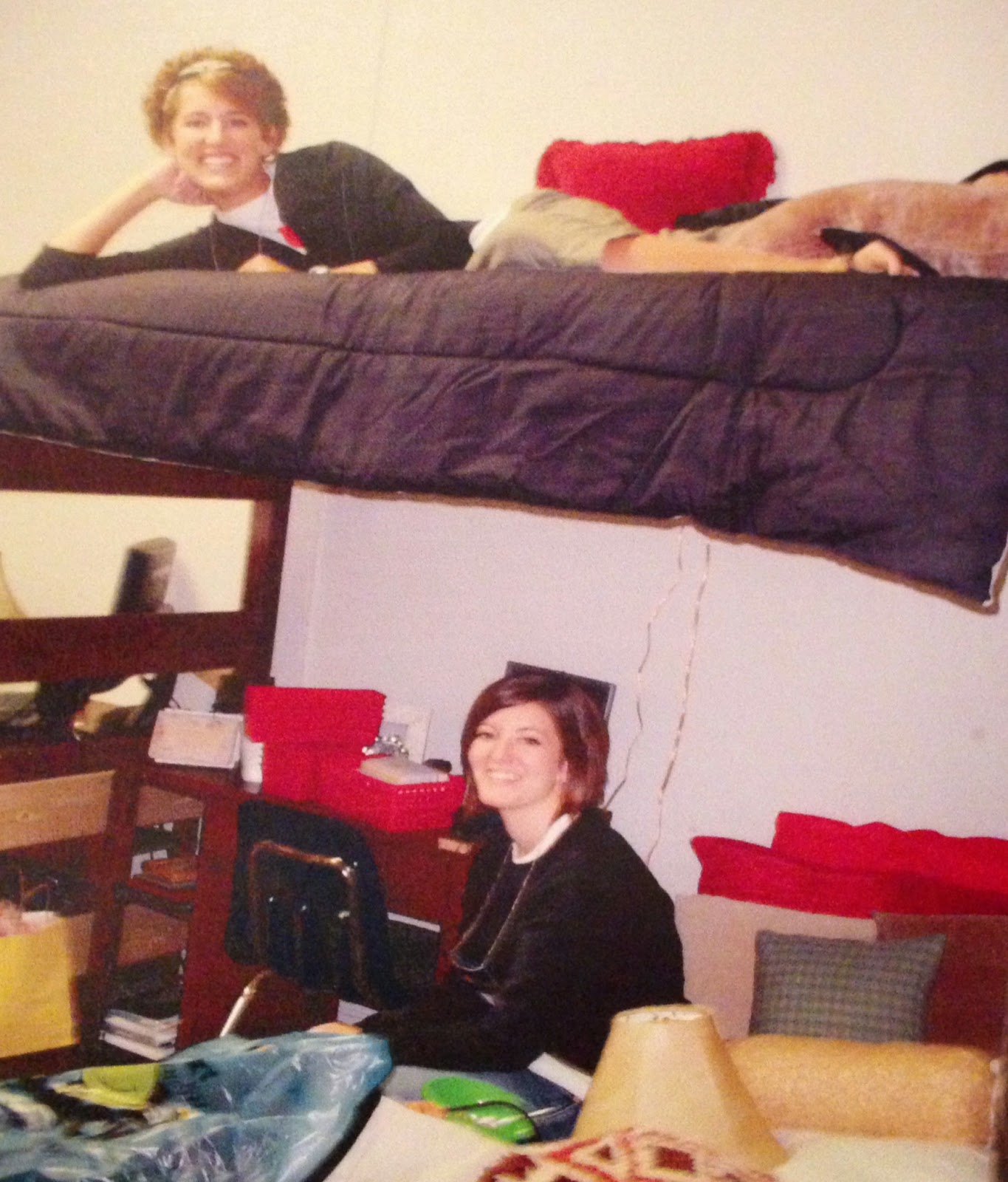 But those first few days/weeks/months were pretty tough.  Questions were swirling through my mind and I would've loved to have a little reassurance from my future self.  So if I could go back and have a little chat with freshman Claire, this is what I would say:

Attending college at OBU is not the same as attending Super Summer at OBU.  You'll be sad about this at first, but later you'll be really thankful.

You are going to be challenged in every area possible, but perhaps the most important area will be your faith.  Not all Christians think, act, or believe the same way.  You'll learn very quickly that your convictions don't always match up with others' and that is not only okay, but it's GOOD. 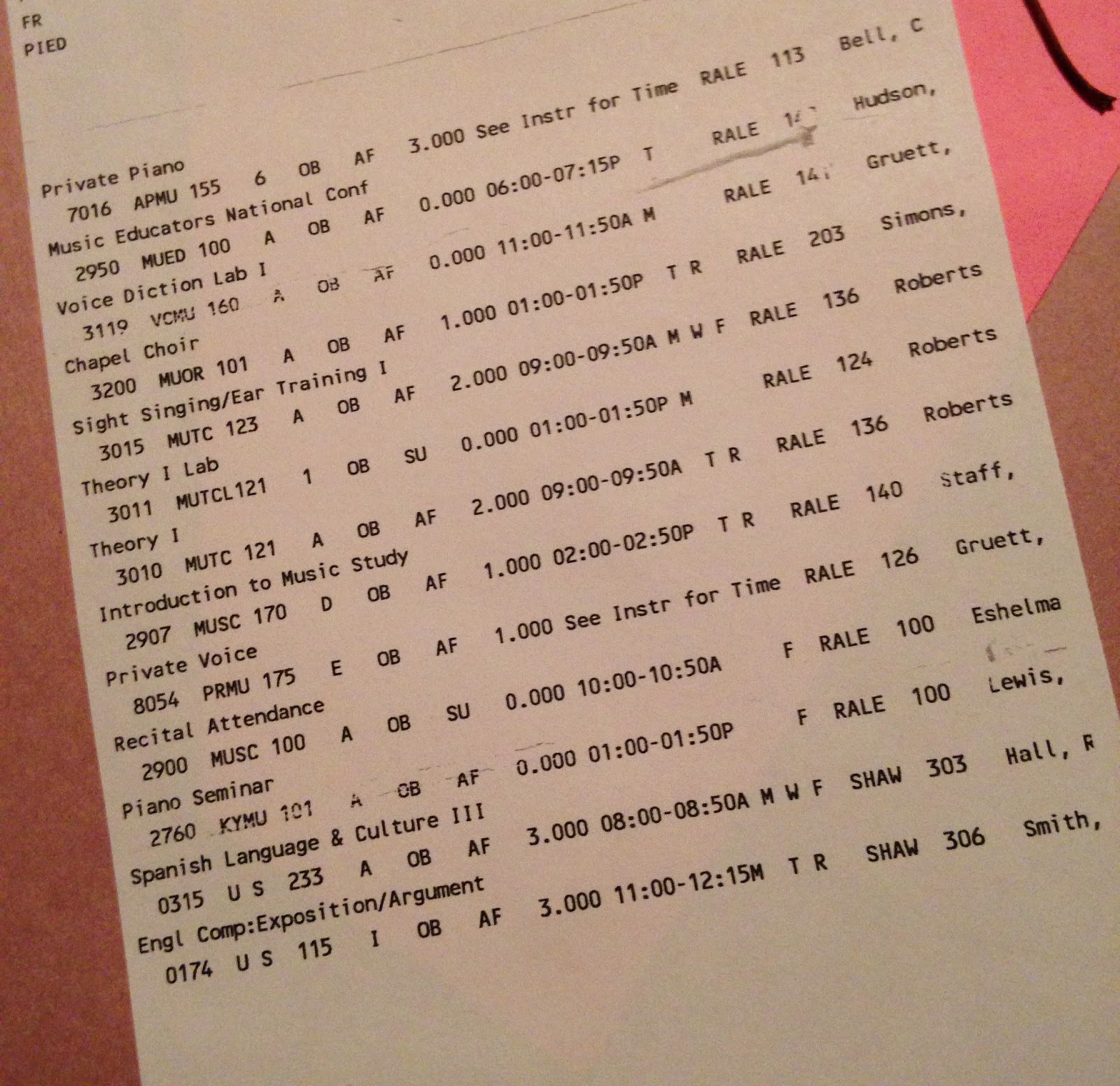 You will spend 2-3 hours a day practicing piano and most of your days will consist of classes from 8 a.m. to 5 p.m.  You may get a break.  Maybe.  It's hard to be a music major, but you'll love it and realize that all of the work pays off.  You'll love theory so much that you'll actually choose to take Counterpoint, which isn't even required for you.  You will perform so much that you'll become a pro at managing your nerves.  You'll look forward to every Chorale rehearsal and every music history class.  You will leave this school of music with an amazing amount of knowledge and a deeper love for music.  Oh, and the best professors at OBU are the music ones, so you're really lucky.

The friends you make this first semester of college may end up being the people you hang out with for the rest of your years at OBU.  BUT most likely, they're not.  It's very possible that you won't find those people this semester.  Your BFFs are out there though.  Don't you worry.  Some of the most wonderfully talented, intelligent, and beautiful girls that there are on the planet are right here on this college campus.  You'll leave OBU wondering how you ever lived life without knowing them.

The whole "When you get to college, those boys'll just be knockin' down your door!" thing isn't really the future for you.  You'll date two guys at OBU who happen to be roommates and best friends.  And it's not even weird!  You're so fancy. 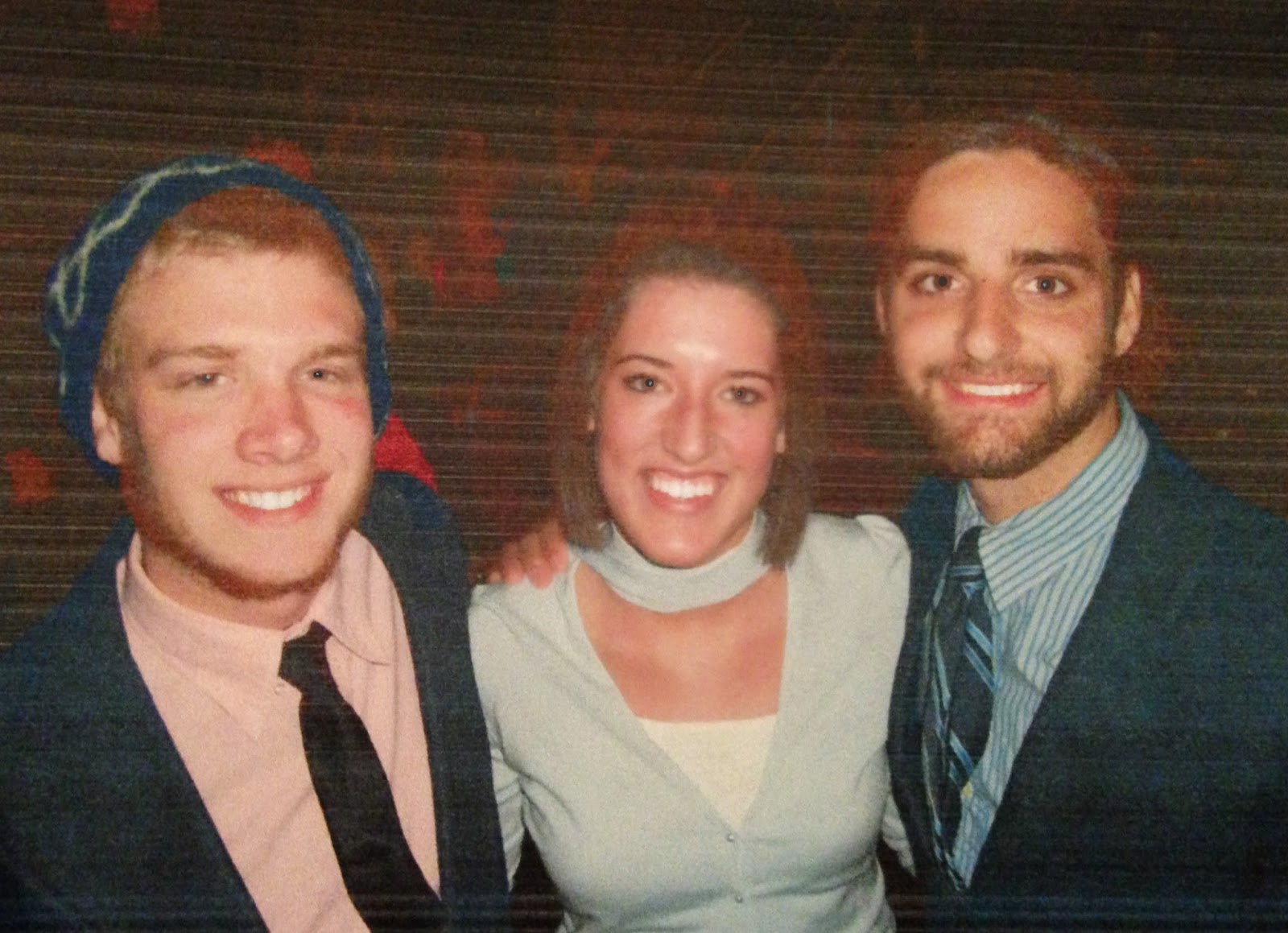 And while we're on the topic ... Your husband is Colt.  Yeah, the one on the left.  I know you don't believe me, but it's the truth.  That greasy haired, winter beanie wearing, singer-songwriter who wears girl jeans is actually the man of your dreams, you just don't know it yet.  You'll love his company in both semesters of freshman English, avoid his company in the ARA sophomore year, and then bawl in your apartment junior year because you're so in love with him you can't stand it.  Buckle up.

What you're hoping to gain from OBU will be far surpassed by what you actually gain.  I could go on and on about OBU, your friends, your music professors, what you'll learn, the opportunities you'll have, or who you'll became.  Just know that it's all better than you could've ever imagined.
Posted by Claire@MyDevising at 4:56 PM