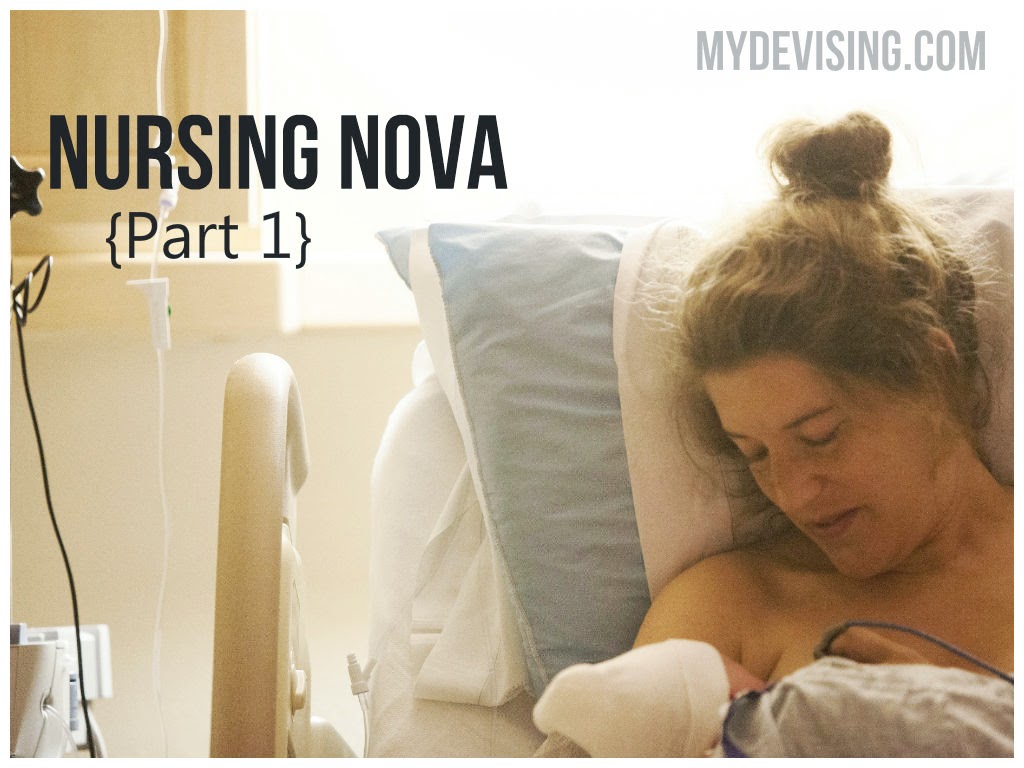 (It's been quite a process wrapping my brain around the overdue pregnancy, the surprising epidural, and not being able to nurse.  None of this was in my plan, but of all of them, not being able to nurse has been the hardest to come to terms with.  In order to gather all of my thoughts on this issue, I've divided this into a few posts.  I do not feel obligated in any way to share my nursing story, but I think it's an important one to share.  I've been so encouraged by reading other stories from women who had struggles nursing.  I hope this will somehow encourage anyone else who has been in my shoes.)

This past spring was obviously going to usher in a new season for our family.  With Nova coming sometime in May, it seemed natural to feel a little extra excitement with the coming of spring.  The months leading up to Nova's arrival were filled with anticipation, not only because of her but because there were so many encouraging words given to us that held such promise and hope.

Back in January, I was meeting with a group of women as a part of our women's retreat planning.  We were praying together and at one point, they circled around me to pray for the music portion of the weekend.  One woman spoke about how natural this would be for me.  She affirmed in me that leading this music and leading these women is something I was made to do.  Shortly after, another woman talked about how she felt the Lord was telling her that exact sentiment also applied to my delivery and new life with this baby in my belly - that my actual labor and birth would be easy/natural and that my transition to two children would be that as well.

The encouraging words continued throughout the next months.  One friend shared a mental picture she had of me nursing my baby in a nursery with light pouring in.  She said this season would bring a calm and peace I've never known, and that I would be filled with grace.  Several other friends on separate occasions gave more affirming words that fell in line with this general idea.  The words "peace," "calm," and "grace" were constantly being spoken into my life.  I heard them and thought, Only God could give a scheduled mother who has a lot of selfish, controlling, and uptight tendencies like me peace/calm/grace in this new season of adding another baby into the family.  I was excited.

For someone who doesn't love the newborn phase and struggled with PPD the first time around, all of these words were so life-giving.  I tried my best to walk in these truths and believe them every day - an easy/natural labor and delivery and transition to two kids, a peace and calm I've never known, the ability to mother with grace.  I claimed them as mine, prayed for them to be true, and I chose not to dwell on the but-what-ifs.

May rolled around and our family got some really great news.  Colt landed a new job at Walrus Audio!  That was a huge answer to prayer and a completely unexpected surprise!  Colt was made for it and he loves what he does.  No doubt that this new job was a huge part of the promise of what this new season would bring to our family.

We approached Nova's arrival with such hope, faith, and refreshment.

But then I went past my due date - way past my due date.  Why was God making me wait?  And then when I did finally go into labor, it was not what I expected.  Did God keep the natural birth experience from me?

I was pretty disillusioned.

With the pregnancy and labor/delivery behind me, I pressed on with the next big thing in motherhood:  nursing.  Finally, something I'm good at, I thought.

When I look back at my nursing success with Duke, I am blown away.  I had absolutely no idea what I was doing and I truly mean that.  I just thought, hey, everyone nurses their babies so I guess I can.  And it worked.  Duke latched, I produced, and he got what he needed.  Sure, I experienced the mild discomfort all mothers experience, and at first there were some really long 45 min-1 hour long nursing sessions.  But within a few months, it felt normal.  Just me and Duke and my little single electric Medela Swing Pump (which was perfect because I was only pumping once a day to keep a small supply going in my freezer).

This time?  I registered for the big guns - the Medela Pump in Style Advanced.  I knew I'd have a toddler running around and there was no time for one-side-at-a-time shenanigans.  Reese provided me with pumping bras so I could be completely hands free.  I actually had several nursing tanks, which I didn't have for Duke.  (I know, I know.  How did I even survive??  I'm not sure.)  I loaded up on nursing pads, breastmilk storage bags, and lanolin.  (If someone would've told me that I'd only need all of that stuff for 2 months, I wouldn't have believed them.)

I knew what I was doing.  It's like that rare feeling in life when you walk into a classroom on exam day knowing you could answer anything.  Bring it on, you think.  You know the material so well and you're almost excited to take the test just so you can ace it.  I was confident and ready to nurse like a pro.
Posted by Claire@MyDevising at 3:12 PM