I signed up for the Route 66 half marathon before I had Nova.  This was my way of telling myself, hey, you should have your act together by this point.  It's really cute to think about how even though I knew I'd be 6 months postpartum, I was still hoping for a PR.  But as November got closer and closer, I realized I had zero motivation.  A big part of me didn't want to run it because I wanted to stick it to someone.   I just had a baby and went through 2 months of nursing hell and now I don't have breastfeeding to help me lose weight so I'm not running your stupid race.  THERE.  Very rational.

In my short time of training, here were my rules:
1.  Don't wear a watch.  I knew it would only make me mad because this would definitely be the slowest running I'd done in a long time.
2.  Try to not go over a 12 minute mile pace.  I didn't want to set high hopes of negative splits or anything, but I still wanted to maintain some dignity.
3.  Take breaks if needed.  I have NEVER allowed this but shortly into my "training," I knew that this was a must.

Race weekend finally arrived.  We dropped the kids off at my parents' house and left for Tulsa.  On the way, we stopped by Hoboken in Guthrie to see what all the hubbub was about.  Sure enough, the hubbub was right.  The coffee and my mocha were both amazing.  Also, I had no idea that I knew the owner from my church youth group days.  If you're in OK, this place is definitely worth visiting. 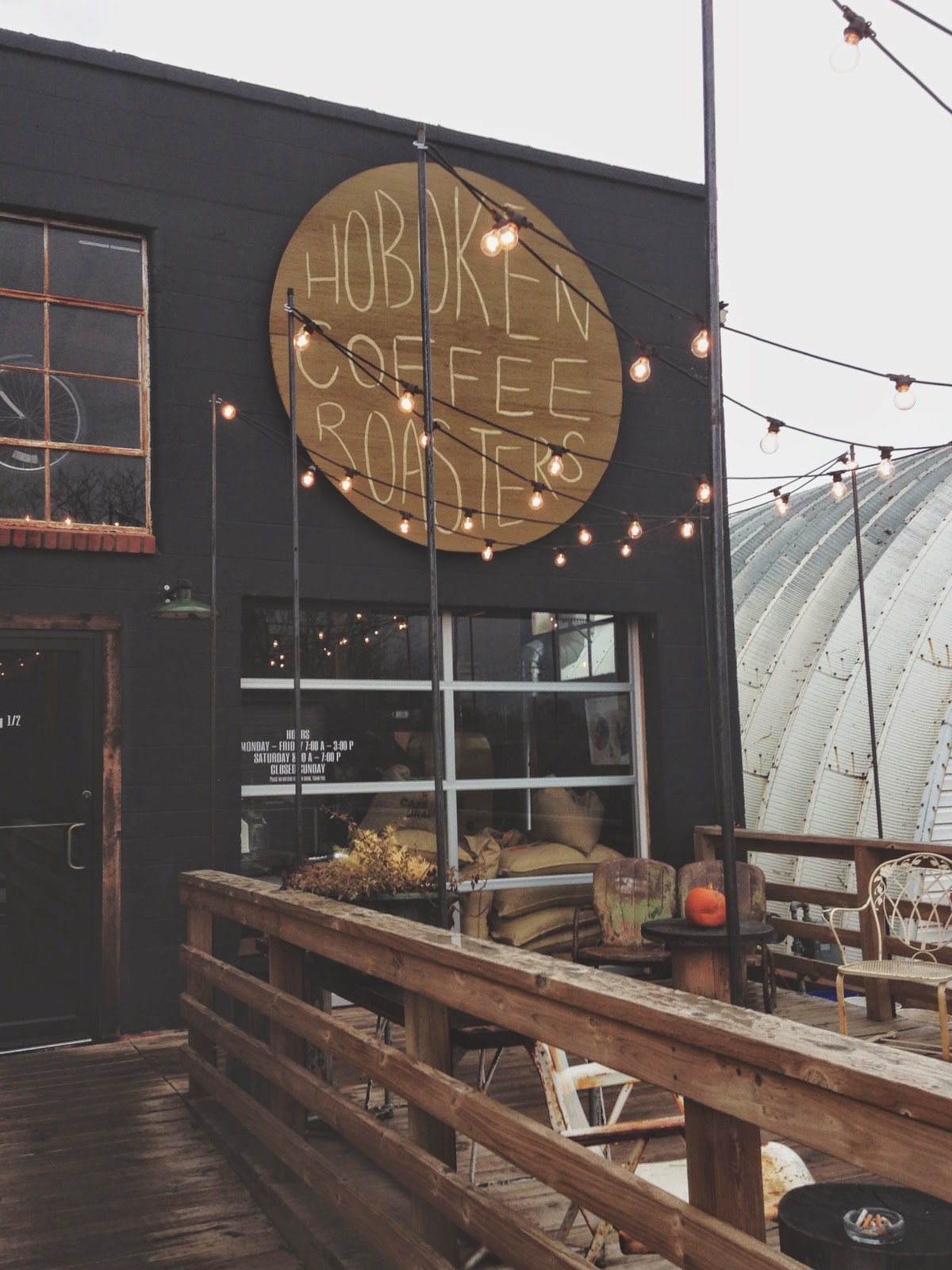 After getting settled in at the hotel and picking up our race packets, we went to dinner.  Josh and Becky have kind of become our official racing buddies.  It was so great to be able to spend the weekend with them. 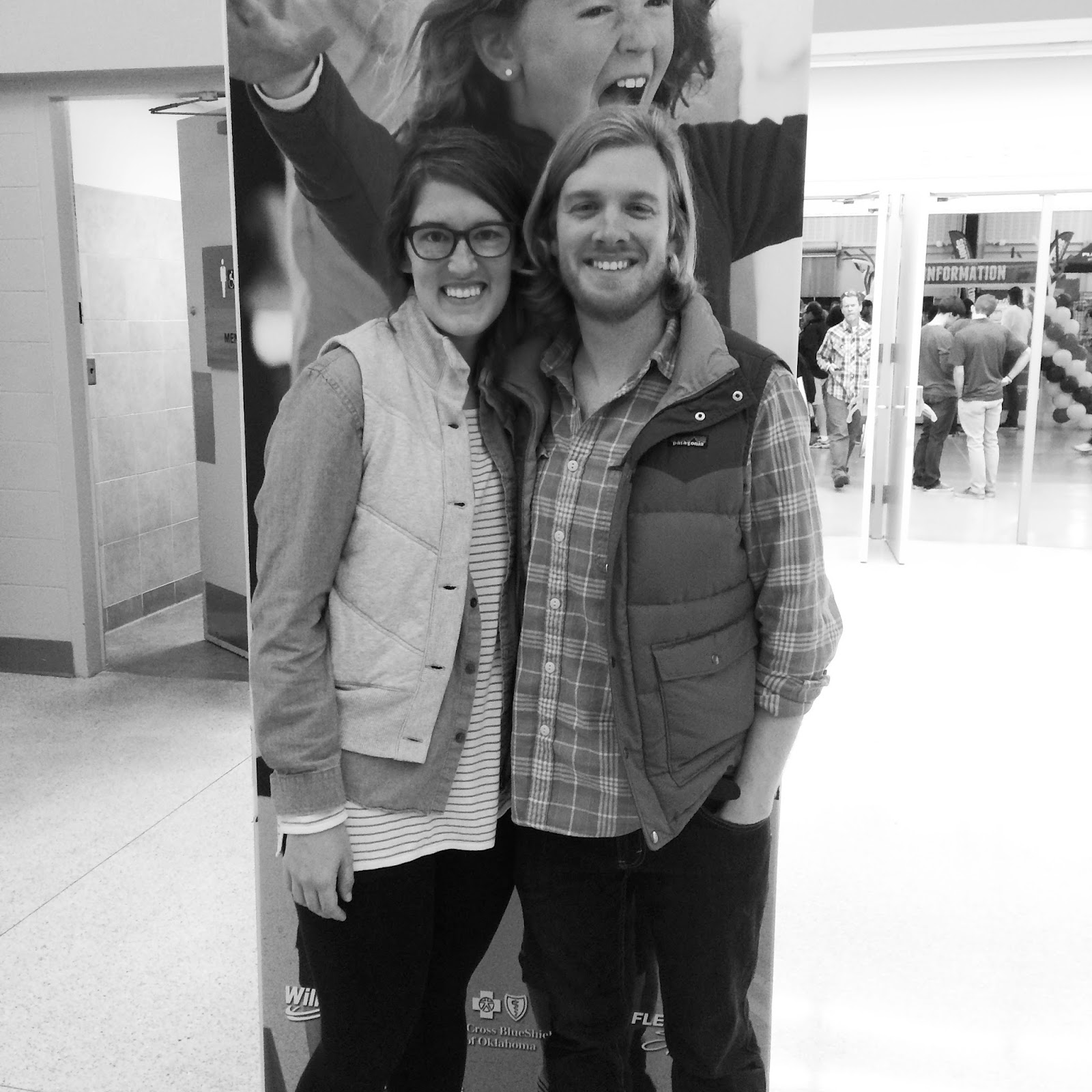 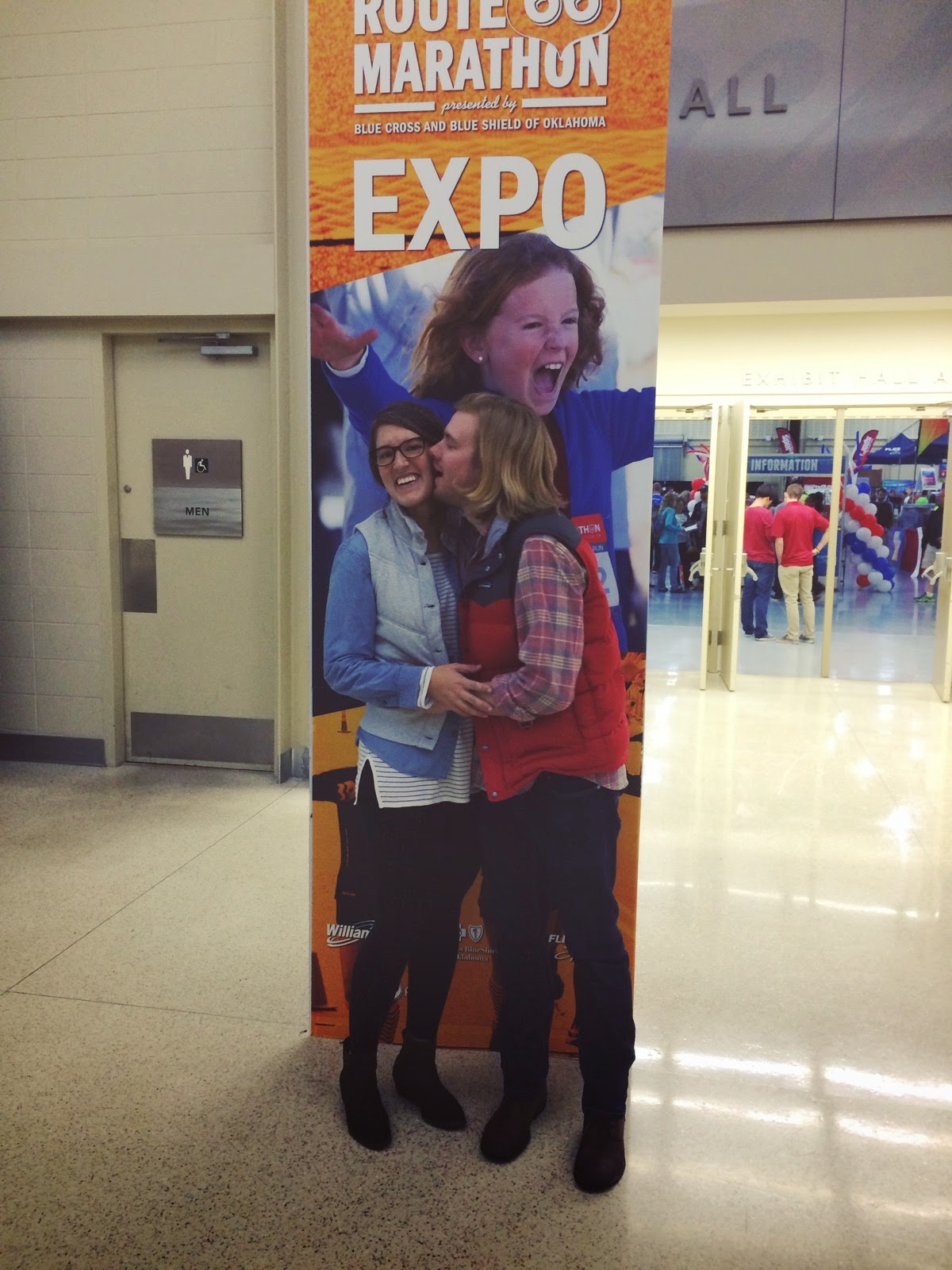 Fortunately, the weather for the race was amazing.  Unfortunately, the Route 66 course is very hilly and I never run hills.  We drove the course the day before and it seemed like just as you finished one hill, you would start another one.  I kept looking out the window and thinking, so this is the part of the course where I'll want to die, over and over.

That Sunday morning, I woke up and definitely had the race jitters. 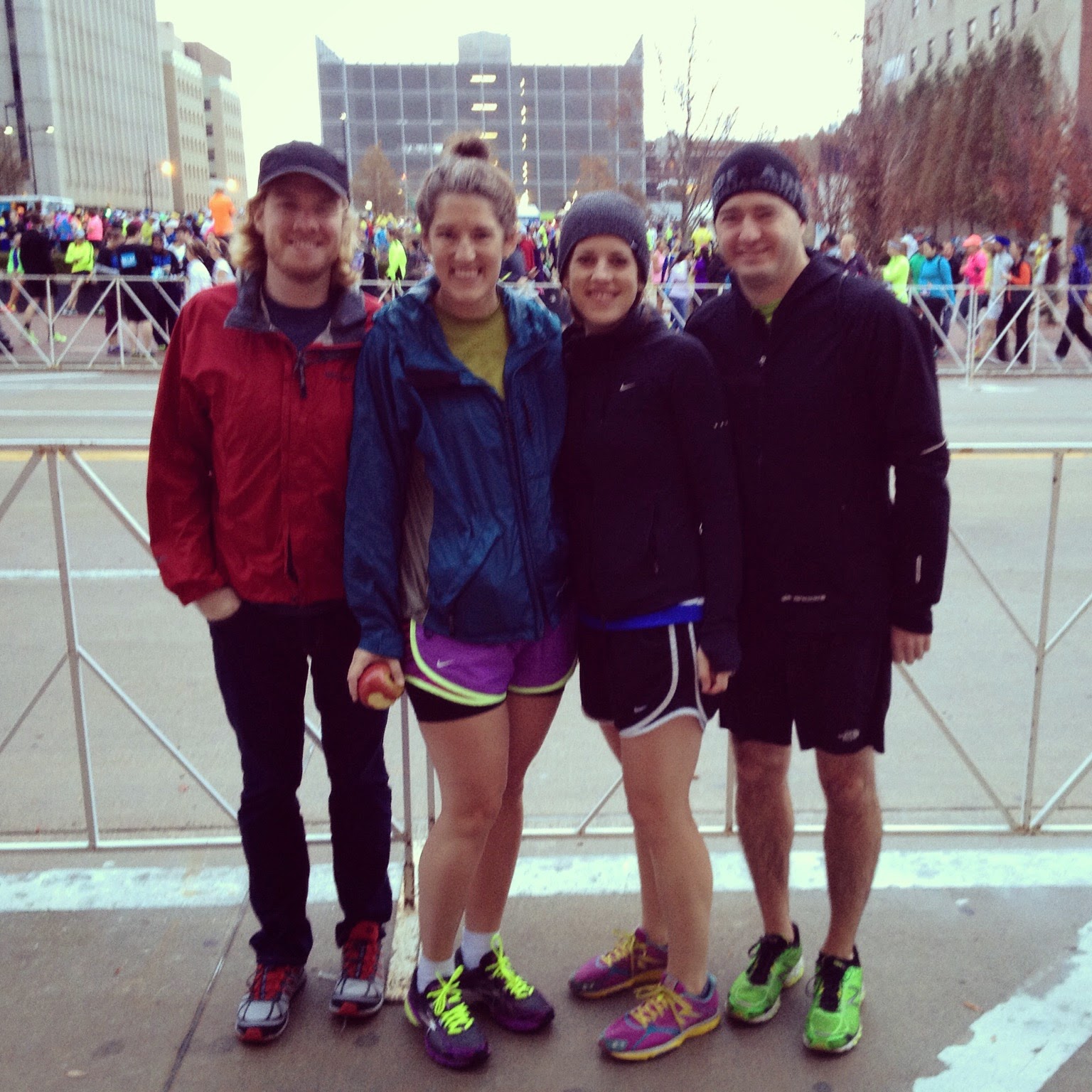 The first 5 miles were hard.  Not a good sign.  I ran them without any breaks, but I couldn't believe the energy I had already expended after that short distance.  Around mile 6, I found a friend.  Her name was Michelle, but up until then her name was Purple Shirt Girl.  I always like to find someone that seems to be running my pace.  She let out a groan and made a comment about the hill we were currently on.  At that point, I took out my ear buds and started talking to her.  Music is kind of like fuel for my running so I was pleasantly surprised to find that my legs could still move without it.  We talked off and on for the rest of the race.

Around mile 7 was when the walking breaks started, I think.  For me, it feels like giving up when I walk.  I know it's technically not giving up, but that's just how it feels.  This will sound semi-depressing, but after Nova's birth and nursing issues, I experienced what it felt like to give up on things.  And, truly, in those circumstances giving up was absolutely necessary.  I had to give up the natural birth and I had to give up nursing.  It was for my good, Nova's good, and my family's good.  But what I learned is that even though I gave up, the world still turned and I was still alive.  During this race, I realized that walking off and on throughout the race was okay.  I was still in the race and I was going to finish it and that was the important part.  While my all-or-nothing personality has taken some hits this year and is needing to be restored a bit, I'm glad to know that sometimes, it's okay to cut yourself some slack.  There is definitely a balance to be achieved when it comes to fighting for your goals and not being so hard on yourself.

I finished my 5th half marathon at 3:01:56.  This is only faster than my 4th half marathon which was a trail run.  (You know, the trail run where I Instagrammed and took potty breaks just so I could sit down.)  I'm not proud of my time, but I am proud that I followed through and finished. 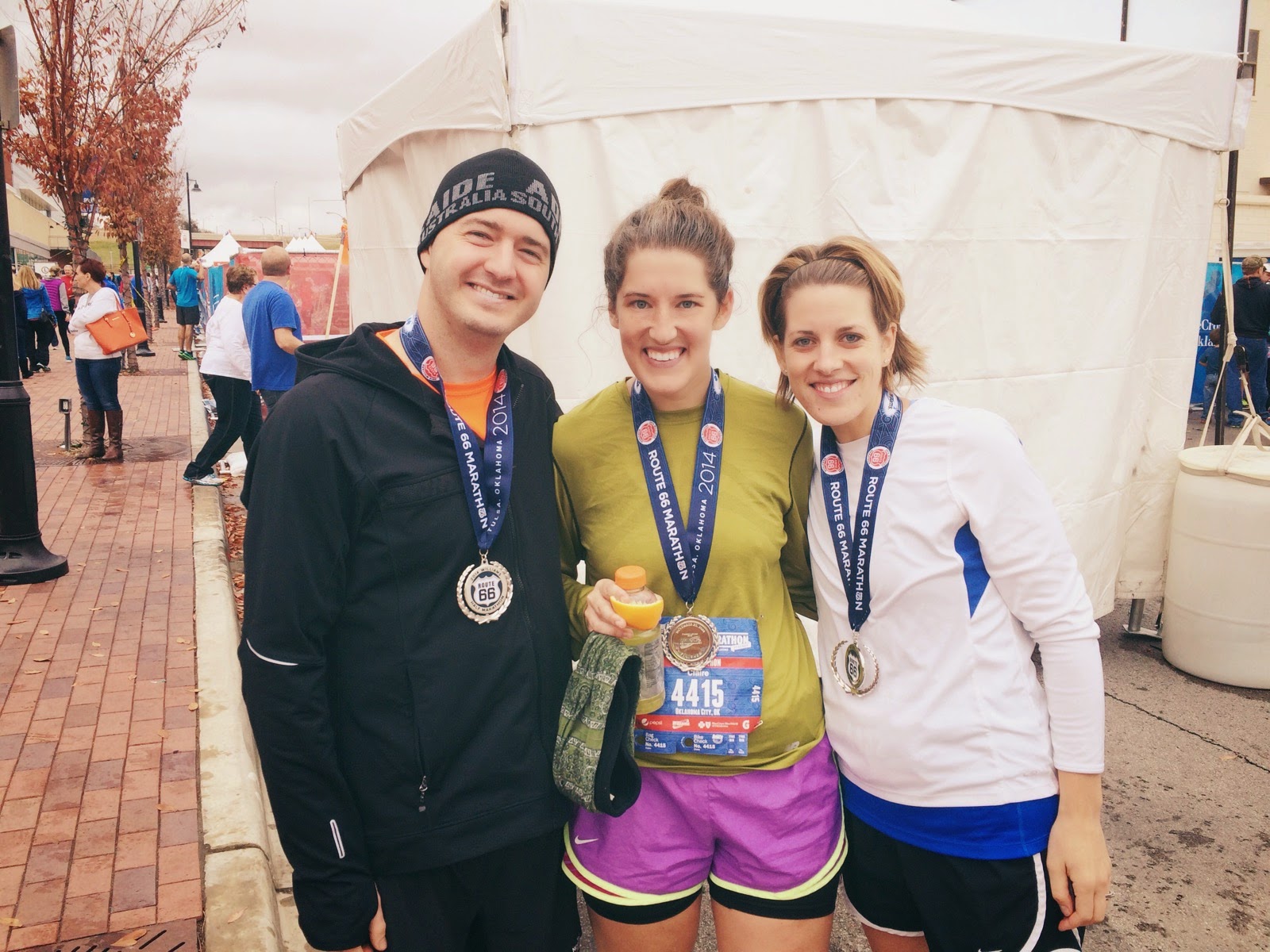 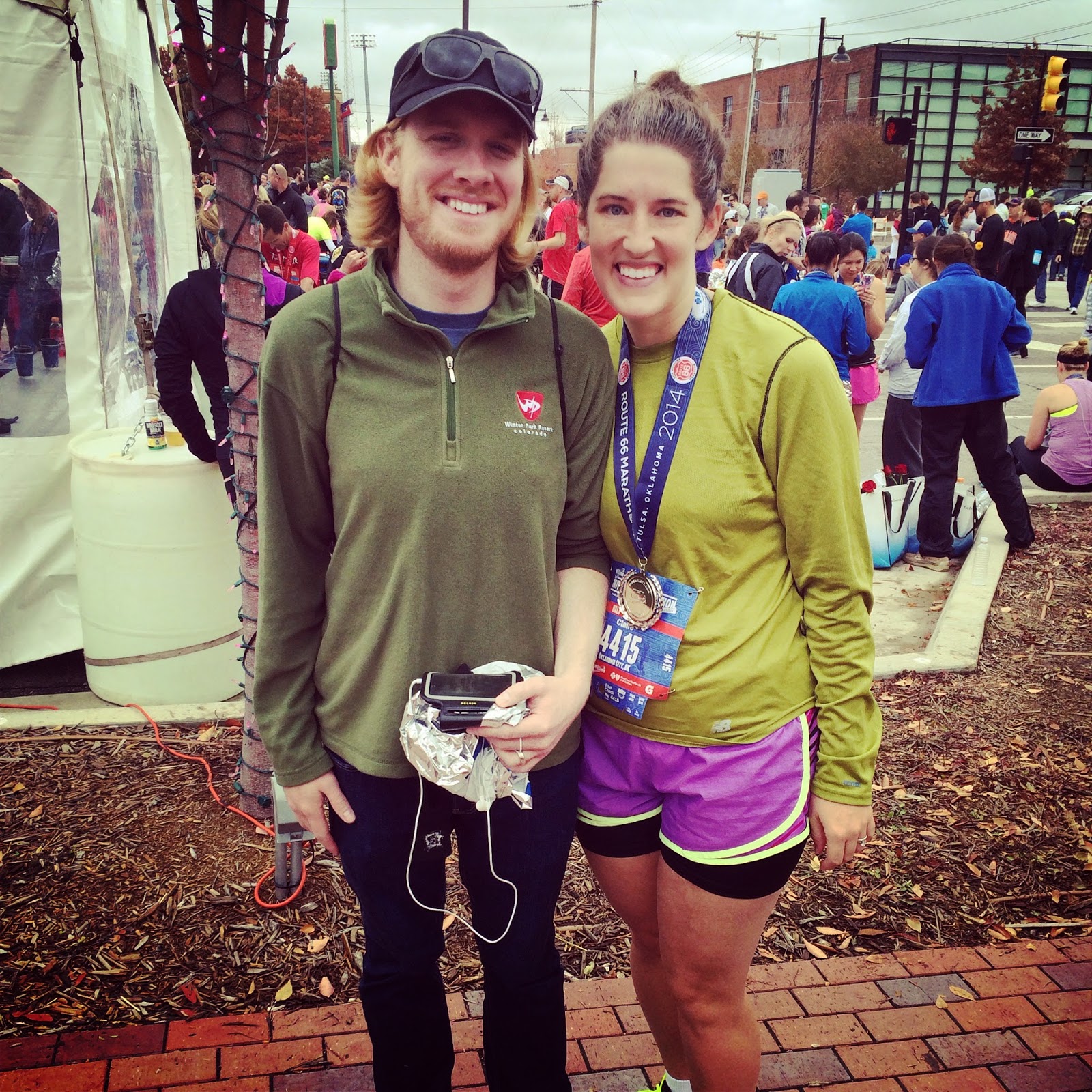 Almost 2 weeks have passed since the race and I still am feeling it in one of my knees.  I lived it up last week by staying completely inactive and participating in 183 Thanksgivings (plus leftovers) so I should probably kick it back into gear sometime soon.  It sure is hard to get motivated though when it's pitch black all the time and all I want to do is snuggle up by the tree and eat a 4th meal every night.

Did any of you run the Route 66?  Any of you have races coming up?
Posted by Claire@MyDevising at 4:34 PM