that time i ran a half marathon without training

Yeah, that time.  Let's talk about it.

Mirela, Brad, and Colt made plans and had been training to run the Timberline Half Marathon around Timothy Lake.  I opted out because 1 - I had just run the OKC Half Marathon a month before, 2 - I'm not that hardcore, 3 - Someone had to watch the babies, and 4 - No thanks.

The day before the race we were doing a little morning hike and Brad mentioned that he wasn't going to run it.  (Cue Mirela and her persistent reasons for why I should run in his place.)  I tried to fight it, y'all.  But the Watsons had extra of everything - iPods, earphones, tights, sports bras, etc.  I had some running shorts and my old Brooks with me so there really was no excuse.  I couldn't say no.  And I kind of didn't want to.  Regardless of the pain I thought I knew I was about to put myself through, I knew it'd be a cool accomplishment. 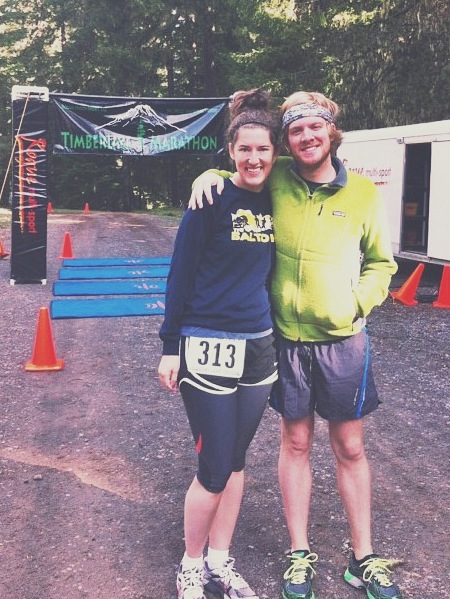 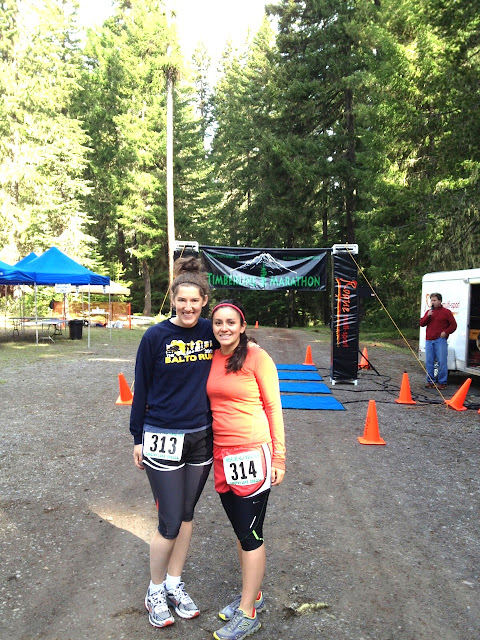 This "half marathon" was actually 14.2 miles.  Mirela referred to it as an ultra half marathon.  And folks, everything about it was ultra.

It was a trail run.  It was at a higher altitude.  It was warm.  It was the longest I'd ever run in my life.

For someone who likes things to be perfect when I'm running (great weather, all pavement, the right gear, a clear course, zero uphills), this was not going to be easy.

Along with all of those tricky factors, I had none of my usual gear I was used to.  I wore no headband (to cover my ears ... because I'm one of those weird runners whose ears hurt when they run), I ran with Brad's Camelbak, I wore old shoes, I had to carry Brad's iPod in my hands, and maybe most importantly, I had no playlist.  I jumped around from random artists - Death Cab, Frou Frou, Keane, John Mayer.

The most common issue with this trail run (like most trail runs, I assume) is falling.  A guy in charge warned us that morning about watching where we plant our feet so we don't trip, slip, or roll our ankles.

These comforting words were accompanied by the realization that I might actually be the last one to finish this race.  I think they only let something like 400 participants in.  I crossed my fingers and thought, please let there be slow walkers.

The race was starting and because the trail was so narrow, each person ran through the start line one at a time.

I didn't plan on running with Mirela since she'd been legitimately training and the only training I'd done was literally a jog the day before from The Timberline Lodge to the parking lot.  So I got in the zone and started running very slowly.

The first 5 miles, I was feeling great.  I had no idea how hard my brain would have to work on a run like this.  Every move had to be calculated or I knew I'd find myself with a sprained ankle.  I was strategically planting my feet with every stride.

The course was a constant uphill/downhill roller coaster.  The only thing consistent about it was that it wasn't consistent at all.  There were also a few moments of confusion.  The trail wasn't marked extremely clearly the whole way, so a lot of the time, I was just trying to stay as close to the perimeter of the lake as possible.  In addition to that, there were several times when you were required to either climb/jump over or duck under huge trees that had fallen in the way of the trail.  This was a bit more than I'd bargained for.

Around 5.9 miles, there was a rest station.  This was a turning point.  I kind of had to pee, but I've never stopped to pee during a race.  Not even during a long run.  But I looked at my circumstances and decided I needed as many things working in my favor as possible, including an empty bladder.  So I went.  I had no watch, so I had no way of keeping track of how long this stop was.

This is when apathy began to knock at my door.

I'm pretty good at being a balanced individual in most areas of my life.  But then there are some things in which I am only extreme.  Running is one of them.  I don't stop.  Ever.  I am a woman of records and that is simply not acceptable.

Well, I continued on running, thinking I'd run the rest of it just like I had been.  But around mile 7, it got bad.  My insides were yelling at me to please take a break and walk.  So I stopped.

Before the race began, I said something ridiculous like, "I'd love to be at the 10 mile mark by 2 hours."  Isn't that precious?  I looked at the clock on my iPod and realized I had been running for 2 hours and was definitely not at 10 miles.

When I saw the rest station at 10 miles, I decided to take advantage of another chance to sit on my butt.  So I went to the bathroom.

And then I did something I never thought I'd do during a race.

I got my phone out and texted.  Yes, like a ridiculous person, I texted Colt.  But truthfully, I wanted him to know I was still alive.  And I also wanted to write in all caps about how hard this thing was.

After this potty break, I walked on the trail for a bit.  I felt my phone vibrate and got it out to see who it was.  It was Kelsey - one of my sweet friends who is an extremely good (FAST) runner.  She wanted to know how it was.  Was.  Oh, how I wish it was, but unfortunately, it still is. 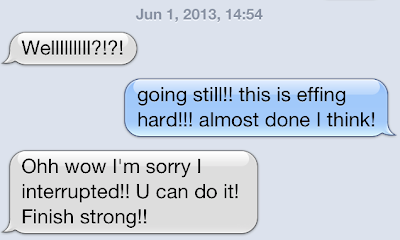 I couldn't believe myself, but I was actually walking on a trail during a race and texting a friend.  Who am I?  Have I given up completely??  Yes, yes I have.

But my giving up wasn't really validated until I Instagrammed a photo during the race.  This was a low point.  I was now on a scenic tour of Timothy Lake.  But after walking, taking potty breaks, and texting people, are there really any true expectations left? 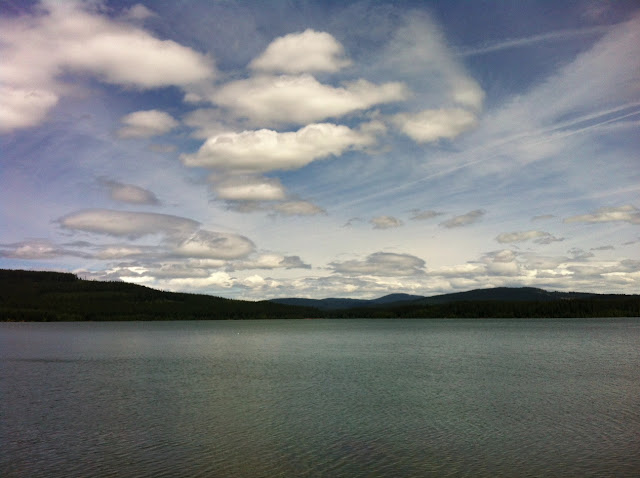 Sometime after this Instagram fiasco, I pulled it together and found a system that worked for me.  I ran anytime the path was completely flat and walked when it went uphill.  This worked for awhile until during one of my walking breaks, I found myself in a daze, walking lifelessly with my Camelbak tube hanging out of my mouth.  I snapped out of it and tried to maintain a few yards of running every once and awhile, but my feet were killing me.  I never knew how terrible it was to run in old shoes until this race.

Somewhere in the last mile or so, there was this crazy steep uphill climb.  I had to stop and catch my breath because I thought I might pass out.  (When I talked with Colt later about this, he said that nobody, including him, ran up that thing.  It made me feel better knowing that people who run 8 minute miles even had to walk.)

I can't tell you how badly I wanted this to be over.  Some might say, "But look where you were!  You should've just enjoyed the beauty around you!"  Scenery schmenery.  I mean, I love nature and whatever, but it didn't matter after a certain point.  I was dreaming of cokes, burgers, fries, milkshakes, seeing human life.

Mirela immediately celebrated with me and made me feel like a million bucks.  I crammed 2 packs of peanut butter crackers in my mouth and filled up my bag with other snacks for the drive home.  It was over and I was alive and my life would go on.

The soreness I experienced was unmatched by any other moment in life.  I moaned and groaned with every move I made for 2-3 days post-race.  I know Colt really appreciated it.

But in spite of the pain, I'm glad I did it.  You should always blog about living your life rather than living your life to blog about it.  But in the middle of this race, I realized this was an exception.  I kept telling myself, "There's going to be a moment when I'm sitting on my couch, laughing, and writing about this."  And sure enough, I was right.
Posted by Claire@MyDevising at 8:59 AM