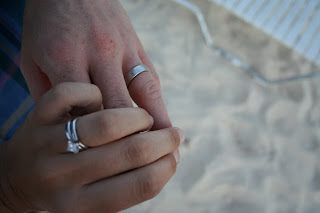 Well, I suppose I understood a little better in college that those kinds of stories probably weren't in my near future.  In fact, I almost became a little bitter towards the idea of "true love" and "happily ever after."  It's just simply not practical, right?  I had made up my mind my sophomore year that I would probably not get married (again, soo dramatic) and certainly wouldn't get married to anyone from OBU.

It's usually when we make outlandish statements like that when we are proven wrong.

My friend from freshman year had become someone that I had fallen in love with junior year.  It was exciting and it was true love.  I was totally smitten.

We will be married 3 years this October and I love Colt more now than I could have ever imagined.  It doesn't get old, which is just as it should be.  I never appreciated those comments during our engagement like, "Well, you just wait!  You won't be holding hands for long!"  (Advice:  Don't ever be 'that' guy/girl to soon-to-be married couples.  Nobody likes it and you're the only one that thinks you're funny.)

This past week, I've really been thinking about love and marriage and the beauty of it all.  I feel completely blessed to have Colt's love and to be able to love him back.  It's much better than anything you see in the movies or any story you can create in your mind.  No, we're not perfect at love, but it sure is a fun and worthwhile adventure.
Posted by Claire at 12:17 AM