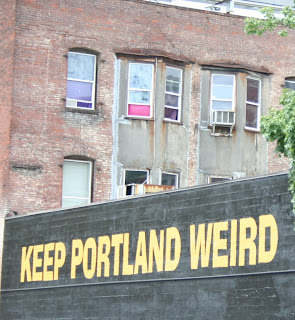 In no particular order, here are just some of the things I love about Portland and about our recent trip there:

No Sales Tax - I enjoy this every time we're in Portland.  If a coke is $2.50, then you pay $2.50.  What a concept!
Exploring Downtown - Navigating and understanding buses and public transportation with your husband is a good test of your marriage, if you'd like to try it.  Bottom line, Colt had his plan and I wanted him to explain every part of his plan.  At one point, we got off the train in downtown just a little more north than usual.  When we got off and began walking, I said,"Um, I just saw 20 people who could take my life."  We walked fast and finally made it into the other part of downtown.
Weather - Their summers are filled with  temps in the 70s and maybe something in the 80s occasionally.  It was beautiful.
Sidewalks and Walking - It's great being able to walk to most places.  It's a very bike/pedestrian friendly city and there are sidewalks everywhere.
Tillamook Yogurt - Oh my gosh.  I have never experienced yogurt like this in my life.  Brad and Mirela had some in their fridge and it was definitely gone by the time we left.  Mmm so good.
Good Food - With a crazy variety of local stores, cafes, and restaurants, you're bound to eat some really healthy food and some really good food.  I experienced Thai food for the first time and, from what I'm told, it's the best Thai restaurant ever.  I don't even want to know what kind of weight I gained while we were there.  Oh well, I'll just blame it on the little boy in my stomach.
Prenatal Massage - This was a new thing for me.  Brad and Colt surprised Mirela and I with a little prenatal massage and a lovely spa.  It was heaven.  When we told the boys that our ladies recommended getting one massage each month while pregnant, they laughed.
Prenatal Yoga - This was also a new thing for me.  Mirela and I went to a class full of pregnant women with bellies much larger than ours.  They also were a lot stronger and more flexible than us.  But hey, it was our first time.  I felt a little bit like I was watching an SNL skit unfold as we went around the circle and shared our name, how far along we were, and how we're feeling.  Everything I ever thought yoga was, it was.  However, despite the few moments where I wanted to giggle, it was very relaxing and I bought a prenatal yoga dvd to do for these last 15ish weeks of being pregnant.  Pregnant ladies, if you want to join me, you can!
House Centipede - I came running into our room one night telling Colt I needed a shoe to go kill this bug I'd never seen before in my life.  We went to go kill it and it was gone, naturally.  It was late and Colt thought I was exaggerating/tired/being pregnant crazy.  Sure enough, the next day, it returned and I was confirmed that yes, it was a weird bug, a house centipede to be exact.  Gives me the heebie jeebies.
Funny Story #1 - Brad and I were standing just inside the door at a pizza place.  A lady opened the door and said, "Tamales?"  I said, "Oh, no, just pizza."  I felt very accomplished like, hey, maybe this lady speaks Spanish and I helped her find the food she's looking for.  Of course, I didn't know the Spanish word for pizza so, hopefully, she got it.  Brad started laughing really hard and said, "No, she wanted to know if you wanted tamales."  As I looked down the street, I noticed her blue cart she was toting behind her, out of which she was selling tamales.  Oh, we had a good laugh about that one.
Funny Story #2 - The four of us were walking around in a park one day and a lady passed us on a bike going, "Caw-aah!"  It was a bird call ... except I'm pretty sure she was doing it to another human.  Hey, if people in Portland communicate in bird language, I'm not really that surprised.

If you want suggestions on where to take your next vacation or where to move, Portland is what I recommend.  It was a wonderful trip!  It was so wonderful that I just may not be done talking about it ... so keep reading!
Posted by Claire at 10:07 AM