a garage sale, a parrot lamp, and louise 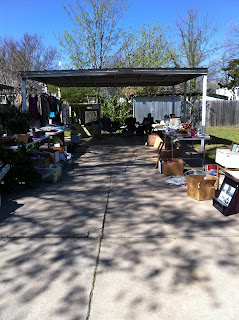 I love going to them and I love doing them.  Two weekends ago, I mooched off of my friend Sara by throwing a few things in her garage sale.  I got rid of a lot of clothes (something I've needed to do) and a lot of knick-knacky things (something else I've needed to do).  It's amazing and silly that we even acquire that much stuff.

When you put on a garage sale, you meet the same characters each time.  Although I could talk about the cheapskates we encountered or funny conversations we had with people, one lady stole the show.  She was by far the most appalling person I've ever come in contact with at a garage sale.  She was a mix of know-it-all friend, nagging wife, and crotchety old grandma.  Truly a terrible combination.  When she strolled up the driveway, Sara was helping a little girl figure out how much changed she owed her.  This lady (we'll call her Louise) abruptly stated, "They don't teach that in schools anymore!"  Shocked, we all look at each other and brush her off saying, "Oh, yes they do."  Louise says, "Well, they didn't teach my kids!"  Reese follows with, "Well, I'm a teacher and I know they teach counting money in school."  Needing the last word, Louise says, "Well, they didn't teach my kids ..."

After educating us on the education world in which her poorly educated children have been out of for at least 30+ years, she looks over at me.  I was nursing Duke (under a nursing cover, of course) and she said, "Whatcha got under there?"  I plainly said, "A baby."  "Well, I know that!  What kind?"  What kind?  Did she really just say what kind?  "A boy."  At this, she attempts to move in my direction and even tries to take a peek at Duke.  (I know!  Ridiculous!)  I pull up the cover, making it impossible, and she moves on.

Our relationships with Louise weren't off to a great start.  This lady was going to be a pill.  She was interested in Sara's entertainment center, which was marked at $50.  She wanted $30, explaining that she was going to have to repaint it anyway.  Time was running out and Sara wanted to get rid of it, so she went with the deal.  The lady also wanted a chair Sara was selling.  Louise instructed her husband, aka her slave, to pull his truck up.  Then, she demanded some sort of sheet or blanket because we wouldn't dare scratch his new truck.  So, she took one of Sara's sheets off the ground that we had used the night before to cover up our stuff.  Yep.  She just took it.

Her husband pulled up to where the bed of his truck was under Sara's carport.  Reese and I exchanged a few words and glances.  They had obviously not done the math.  That entertainment center could not be lifted straight up onto the truck without bumping the top of it on the carport.  We let her figure this out though.  After telling a random man to come help, they realized it wouldn't work.  Husband pulled out, Louise told another random man to come help, and the merchandise finally made it on the truck.

It wasn't over until she took a roll of fabric out of Sara's fabric box to fasten the doors into place.  Sara suggested tape, but Louise said, "Well, I don't want to scratch the paint!  It's a nice color!"

And they were off.  And we were exhausted.

One of the best things about this garage sale was that I got rid of The Parrot Lamp.  We received this lamp as a wedding gift.  Yes, in 2008.  We've held onto it, thinking we'd someday sell it close to its original price, somewhere around $200-$300.  This was the 4th garage sale it'd been in and I was desperate to get rid of it.  A nice lady bought it for $20.  I know, it was a steal.  But when your husband puts something in a box labeled "To Hell," you just want it off your property.

In summary, the sale was successful, everyone made money, and the weather was BEAUTIFUL, and we washed our hands of The Parrot Lamp.  We also consumed Dunkin Donuts, Jimmy John's, City Bites, and Sonic over the course of the two days which is never an inconvenience. :)
Posted by Claire at 4:26 PM