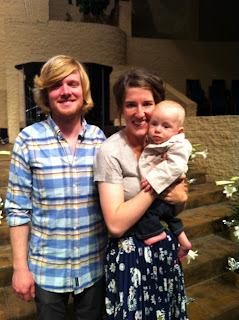 (Duke's first Easter ... complete with spit up on mom's sleeve.)
I don't really have a problem being honest because I've realized that in doing so, people come out and say, "Hey, me too!"  So, here we go.

This past Thursday and Sunday were some of the worst.  Not as bad as those baby blues days, but pretty close.

Leading up to Thursday was a lovely introduction to teething.  Duke has been teething for awhile, but this was the beginning of legit teething.  The kind of teething where babies just scream and cry.  It's rough ... for the kid and the parent.  Along with this, Duke had been spitting up larger amounts than normal.  Blame it on teething, starting baby food, hitting a peak of spitting up ... whatever.  I can't stay clean and Duke can't stay clean.

The feeling of never-ending dirtiness that I've felt for the past almost 6 months spiraled into many other things that night.  I sat in my living room staring at piles of unfolded laundry on my couch, dust on every surface, burp rags and towels scattered everywhere, and dirty floors.  Remind me ... why do I load and unload the dishes only to do the same thing the next day?  Why do I do laundry every week even though the amount of laundry will still remain the same each week?  Why do I sit on my couch with Duke when it ends up getting covered in spit up?  Why have I never seen any other baby spit up as much as Duke?  Why is there no other mom that can go through this with me?

Feeling like there was no escape from being unclean every day of my life, I threw some stuff.  (No breakables ... just pillows, dirty towels, etc.  I may be crazy, but I am safe.)  I dumped out Duke's diaper bag on the floor.  And I probably did a few other things that were childish of me.  I'm not proud of it, but it happened.  I thought, why not add to the mess?  My house, my child, and myself will never be clean.

Colt was gone that night and I needed a break, so I put Duke in the car and we drove to Chick-fil-a.  A fruit/chicken salad and coke didn't fix my problems but they certainly didn't make them worse.  Duke fell asleep and I sat in the parking lot in my car eating.  It was enough time for me to reason with myself and talk to God.  Then we headed back home.


On Sunday, I was wearing a new skirt and Duke was wearing a new blazer.  The skirt was $8.98 from Target and Duke's blazer was a gift from Sara.  It's not that I was concerned about those things getting ruined.  Spit up doesn't ruin clothes.  But it takes time to get up and get you and your kid ready for the day.  Duke spewed out a big one in the nursing room at church along with a few other ones in the sanctuary while I was talking to friends.  I left church with a top and skirt covered in it.
Colt and I were in separate cars that morning, so I went straight to Lake Hefner.  I parked and then I cried.  I cried really, really hard.  Harder than I've cried in a long time.  I told Colt the saddest part about it all to me is that sometimes I feel like I'm missing out on part of Duke's baby life.  Because of all of this, we don't get to cuddle on the couch or roll around on the floor.  Every moment of his life is trapped by a big towel and the worry that one of us is about to be drenched at any second.  I went home, threw my Easter clothes across the room, and got in bed.  Thankfully, Colt's family came over for Easter and brought us lunch.  It was a huge relief having lunch taken care of and having the company of his family.
Spit up is this big of a problem?  Yes.  And it seems silly to most people, but only because it hasn't happened to them.  This kind of spitting up affects so many parts of our lives and every day schedule.  Duke eats 6 times a day, instead of 5 like the average 5-6 month old, because he wasn't gaining well ... because he spits up after each feeding.  Because Duke eats 6 times a day, we go to bed later than we would have to if he only ate 5 times.  Because he spits up so much, we use towels every day and go through more outfits than a typical baby.  This makes for a lot of laundry.  You'll read about reflux in babies and see, "Is it a medical problem or just a laundry problem?"  Just a laundry problem.  Yes, Duke has reflux and he's on medication, but it is a laundry problem as well.  And it's exhausting.  Because of the amount of spit up, I don't like being out in public places during or right after a feeding.  It's not because I'm embarrassed, but because most people's reactions are annoying and I don't want to have to clean it all up.  Because of his reflux, he has to stay upright or elevated for at least an hour after feeding.  This means he is either in his bouncer, which he sometimes hates these days, or in my arms.  And so forth and so on ...
(Side note:  My feelings and frustrations in all of this are not directed at Duke, to be clear.  In my eyes, we're on the same team ... trying to figure this out together.  I'm his advocate and I want this to be better for the both of us.)

In the midst of this issue, I have reminded myself of many other medical issues that we could be dealing with.  My baby doesn't have a heart problem, his muscles and bones are developing correctly, he can see, he can hear, etc.  I know those are much bigger rocks and I'm grateful for our healthy boy.  However, sometimes I'm weak and being grateful isn't enough.  Sometimes I just have to cry, sulk, and let it get me down.  God always brings me back around, reminding me that this is only for a season and that I have so many other wonderful things in my life.

I'm not asking for apologies or pity or advice.  (I'm not against advice but honestly, I've probably done everything possible to lessen the spit up.)  I'm just venting.  It helps sometimes to get it all out there ... even if it means telling you I threw things.  I hope we can still be friends.

Well, folks, that's all from me today.  If you ever need a boost, just re-read this post and know that there is always someone out there that is crazier and more emotional than you.  Happy Tuesday!
Posted by Claire at 2:06 PM