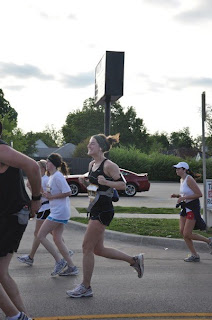 I posted my half marathon training schedule awhile back.  Let's just say I've had to edit it.

The first few weeks, I was doing alright.  Then I just stopped running.  I think it was a mix of becoming busier, gaining a few piano students, and just being plain tired.  After a few weeks of that, I got really nervous about the race and told myself if I could at least do Jillian's 30-Day Shred video, it'd help.  (... even though it has nothing whatsoever to do with the endurance needed for running.)

(This theory is kind of like my theory of drinking equal amounts of coke and water.  The water cancels out the coke so it's like I drank nothing.)

So, after a couple weeks of that, the tired thing happened again.  There I was.  It was 5 weeks until the race and I was freaking out.  I hadn't done one single long run and I hadn't been running consistently.

The problem was finding the time to run.  By "time" I don't mean minutes in the day.  I mean finding a time to run.  But I like running and I'd paid for this race.  For me, there was no option.  I will do it.

I had Colt help me figure out how I could still squeeze in a decent amount of training before the race.  So far it's worked.  I switched my long runs to Thursdays and someone (my mom or Sara) watches Duke for me.  I've done 5, 7, 8, and 9.5 miles for my long runs.  The race is Sunday so we'll just keep our fingers crossed for those last few miles.

Although on paper I should probably run this half slower than my first half in 2010, I don't think I will.  (knock on wood)  One, I think the shock of so that's what 13.1 miles does to my body won't be there this time.  Two, I haven't felt as much like an old lady who needs to ice every muscle in her body the day after a long run.  Three, if my goal finish time backs right up to a feeding, I'll try to hurry so I can get done in time to nurse rather than having to pump.  Too many details?  Welcome to being a mom.  Our lives are details.

I'm planning on running a few more times this week and then ... it's time.  I did the half in 2010 in 2 hours and 37 minutes.  Not impressive at all.  Seriously ... for a 23 year old female ... not awesome.  No need to even be sweetsy about it.  The only impressive thing about it was that I finished.  And that was enough for me since it was my first race and I was pretty new to running in general.  This year, my goal is to beat that time.  I really don't even care if it's by 1 minute.  I just want to beat it.  I'd like to stay around an 11.30 minute mile, which would put me at finishing in 2 hours and 31 minutes.  (Again, not that impressive.)  Hopefully, some extra adrenaline will kick in and I'll finish sooner than that though.

Well, for those of you training, I hope you have a successful last week!
Posted by Claire at 2:41 PM