I didn't do anything exceptionally interesting this weekend.  It was just another typical weekend filled with a bit of yard work, an episode of Grey's, hanging out with friends, going to church, and devouring snow cones.

Friday night is worth talking about though.  We had the Sullivans over.  (Ashley blogs here and you should definitely check it out.)  We love getting to spend time with them.  And it almost didn't happen.

Duke had a pretty big fit that day.  He only wanted to be held and would scream otherwise.  More teething pains?  Ear infection?  I had no idea.  It was really frustrating so we called the Sullivans and cancelled.  It wasn't going to be fun dealing with a screaming baby over a nice meal with friends.  We gave Duke a little Tylenol and put him down for a catnap before dinner.  Then we sat on our couch ... in silence ... just staring at the ground.  We were too depressed so we re-invited the Sullivans back over.  Screaming baby or not, we would have our fun, dang it.

Turns out, Duke woke up and acted as if he'd never cried a tear in his life.  He was perfect the rest of the evening.

Thank goodness we went through with it because we ate a really tasty meal ... 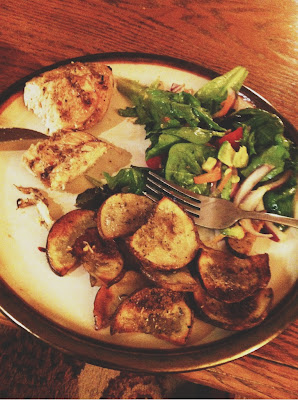 ... and had a lot of important conversations that night.  Like when we introduced the Sullivans to Dubstep.  Or when we talked about Expages.

Do you guys remember Expages?  I was actually the only one of the four of us that had one.  It was around before Xanga and it was a really cheap/bad version of "having your own website."  As I was explaining this to them, the name of my Expage website popped into my head.  You know what it was?  "Airhead on the Go."  I was a freshman in high school when I made it and that's the name I chose to go with.  (I'm just as confused as you are.)  I can maybe understand the "airhead" part, but "on the go?"  What does that have to do with anything?  Anyway, we all had a good laugh at my expense.

Oh, and did I mention that the boys burned 2 (TWO) batches of cookies? 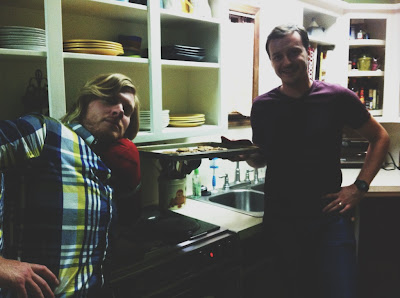 The first time, they just forgot they were in there.  However, when Colt finally went to open the oven door, the oven was off.  Strange?  Well, not really.  Colt has this theory/technique that when things are almost done baking, it's a good idea to turn the oven off and let the food hang out in there a bit longer.  (Love you, Colt.)

Luckily, we are unhealthy and had purchased the cookies that are pre-squared for you.  So he threw in the rest of the batch.  And we forgot about those too.  I'm telling you, our conversations are just that riveting. 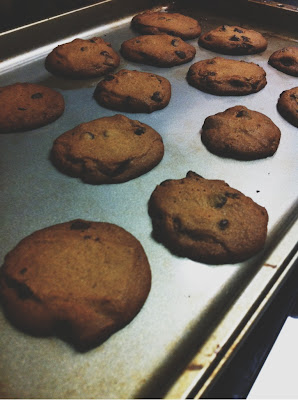 Even though I never ate a perfectly baked cookie, it was a great weekend.
Posted by Claire@MyDevising at 3:55 PM