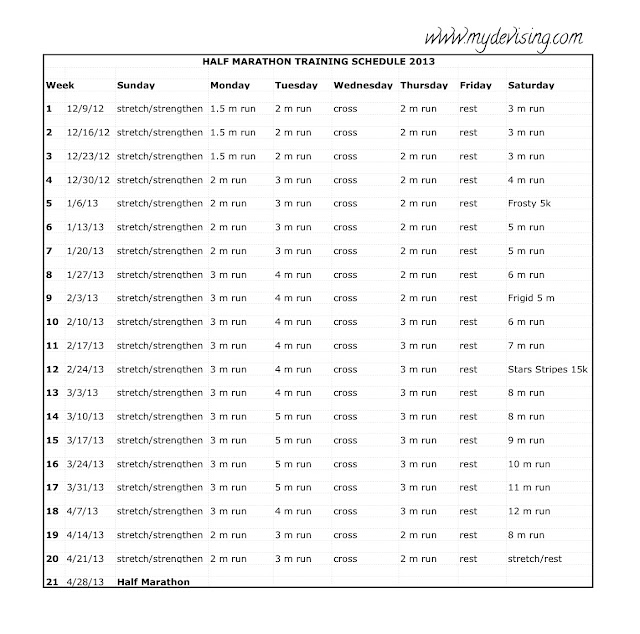 I posted my training schedule last year and I thought I'd do it again.  This time, I got a little crazy with it.  Typically one doesn't "train" for 20 weeks, but the first 6 weeks aren't really training weeks to me.  They're more like hey-let's-remember-how-to-run kind of weeks.  I wanted to write it all out because I like plans and lists and calendars and organization.  It works for me.

I also like to plan for "off" weeks.  With a kid, musical endeavors, the holidays, and random things that come up, I don't plan on following through with this schedule perfectly.  I hope to stick to it, but if I miss a few long runs on Saturdays, it won't be the end of the world.  There's plenty of space to move things around and still get a good amount of training in.

I left a row in between each week so that I could write my time below each run.  It's encouraging to see how you improve as your body gains strength and endurance.

I hate to admit it, but I haven't really run since the half marathon back in April.  It's pretty embarrassing, but it's true.  Sure, I've done a very occasional run with Colt or with Duke in the stroller, but nothing consistent.  I feel better when I'm running so I'm not sure why I haven't kept up with it except for the fact that things are just plain busy.  I'm looking forward to getting back into the groove.


This will be my 4th half marathon to train for.  But I've only actually run the half marathon twice because in 2011, I got injured and on top of that, I was a little pregnant.  It is crazy to think that this will be my 3rd one to run.  For someone who was scraping by to run 1.5 miles several years ago, it seems like an improvement.  It's just proof that anybody can become a runner.

If you're reading this and thinking a half marathon is something you'd love to do but you just can't, think again.  You can.

If you're thinking you just don't have the time, I bet you have more than you think.  I've trained while working a ridiculous job with 12+ hour days that also took up my weekends.  I've trained while pregnant and working that same job.  I've trained after having a baby just 2 1/2 months before.  I'm not bragging, I'm telling you that it can be done.

And I'm not saying you have to do it quickly.  I don't have awesome times to show for it.  Remember, last year I only beat my previous half marathon time by 50 seconds.  That's not too hot, folks.  I'm a slow runner and I'm okay with that.  All I'm saying is you should try it.  It's extremely rewarding.
Posted by Claire@MyDevising at 8:33 AM