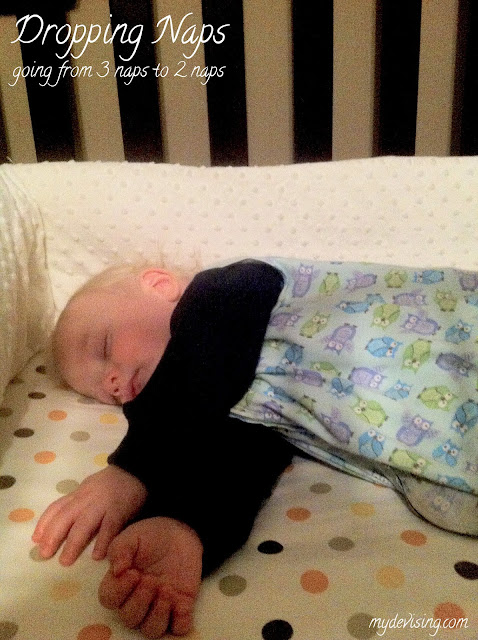 Of course you drop other naps before you get to the point of dropping the 3rd nap.  But I found that dropping the 3rd nap was a really big transition. (I have yet to see what going from 2 naps to 1 nap feels like, but I know it's coming soon.  When it happens, I'm sure I'll have something to say about it. :))

In general, there are a few things you may notice if your baby is ready to drop a nap:

It's pretty simple.  But to know if these things really mean you should drop a nap, they need to be consistent issues.  They could also indicate teething, sickness, or a growth spurt, so don't overlook those things.  Make sure you give it time to know what it really is.

How do you actually drop a nap?

1.  You can drop it cold turkey.  They take it one day and the next, you completely skip it.
2.  You can gradually eliminate the nap.  This is probably what happens in most cases.  It's what happened with us.  Duke would start sleeping poorly for a nap until he was maybe only sleeping a total of 15-30 minutes.  At that point, we dropped it.

Dropping the 3rd nap is kind of bittersweet.  Duke dropped it around 10 months.  It was great because after his afternoon nap, we were then free to go wherever we wanted to go without the hindrance of a nap.  But it was hard because he had to learn how to be awake from around 4:00 p.m. until bedtime without losing it.

Even now, there are days when we are still working through the time slot in which the 3rd nap normally happened.  I've mentioned several times before that somewhere around 4-6, Duke will have a fussy spell.  I think we're almost out of the woods as far as that goes, but there are still some rough days.  If we're outside, running errands, or doing something out of the norm (like not at home playing with toys), then he's usually fine.  So, if you find that after you drop the 3rd nap there seems to be a bit of a witching hour, you're normal.  As I've talked with other parents and friends about this, I've learned that this time of day is a common time for babies to suddenly become fussy.

Please share other nap dropping tips if you have any!
Posted by Claire@MyDevising at 8:25 AM