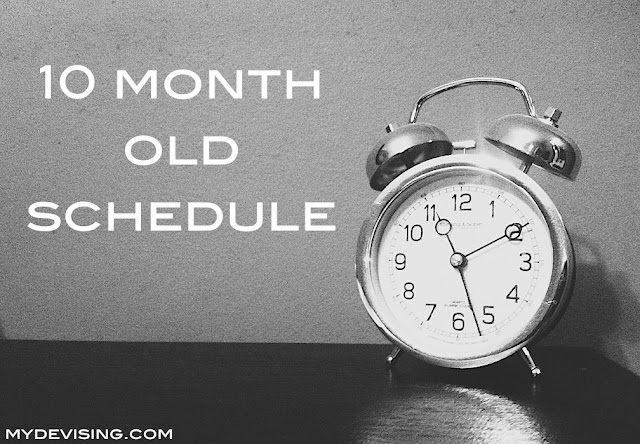 After each meal, we give Duke some Gerber cereal puffs so he can pick up/eat food on his own.  (He loves this part of mealtime!)  Following the cereal puffs, we give him his sippy cup for a few minutes.  Once he starts throwing it around and dropping it on the floor, sippy cup time is done. :)

In order for Duke to get the appropriate length of naps and night sleep while maintaining 5 feedings, we have to do a little bit of cramming when it comes to eating.  I asked a fellow Babywise friend when her baby dropped down to 4 feedings.  She said it was actually only recently (and he's about 4 months older than Duke).  By keeping 5 feedings, we have a bit of an oddly spaced schedule.  Duke goes the longest between the first/second and second/third feedings each day.  This is obviously due to the fact that he's napping.  But because I want a happy, well-rested 10 month old who will most likely not need a catnap later, I want him to sleep as long as he can.  So some days that third feeding of the day isn't until 4:15.  We just make sure we're back on schedule around the dinnertime feeding.  My plan is to continue to stick with 5 feedings until I go to his one year appointment and see how he's doing.  He'll be one before we know it!
Posted by Claire@MyDevising at 9:14 AM