29 pages in my heart

It's only happened twice, which is surprising because I listen to the Classical Radio station (90.1) often.  The first time, I heard it when I was driving home from parent-teacher conferences back in 2009.  Then it happened again a few weeks ago.  I heard Grieg's Piano Concerto in A minor. 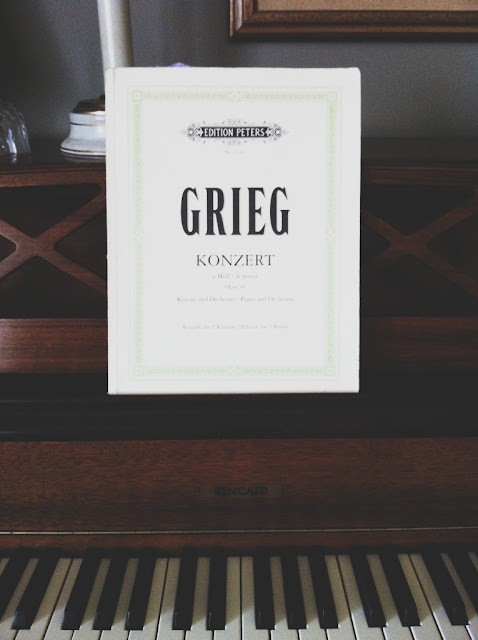 I was sitting on our greenish-blueish couch with spit up stains, minding my own business on the internet next to Colt who was doing the same.  When that A minor chord struck, my hands immediately went straight up to cover my mouth as I let out a huge gasp.  As the chords made their way down the piano, my eyes filled with tears.  (Colt is totally thinking I'm a nutcase at this point.)

Sometime during my sophomore year in college, my piano professor, Dr. Bell (perfectly fitting name for this lady, I tell you), asked me if I'd like to work on a concerto.  Of course, this would be in preparation to audition for Concerto Aria my junior year.  I was scared and excited all at the same time.  This was going to be a huge commitment.  Practicing 2-3 hours a day on my regular repertoire was already my usual routine.  Throwing a concerto in the mix was going to add to my load.  But I was up to the challenge.  By this point in my college career, I had absolutely fallen in love with my major.  I was not always in love with the fact that I was so SO busy, but it was worth it.  I loved what I was doing.

When she told me which concerto I'd be working on, I remember opening the book to see what I had gotten myself into.  The 1st movement of the concerto (the one I was going to play) was 29 pages.  29 pages.  Buckle up, Claire. 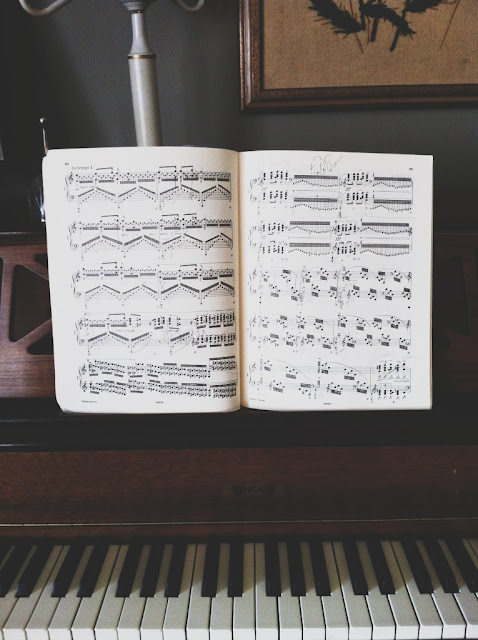 I was a Music Education major with an emphasis in piano - the only one in my class.  It felt weird at times.  "Why do you want to teach music in public schools and not have a vocal emphasis?" was the kind of question I got.  But piano was my deal.  Voice was not.  Yes, voice was my deal in the realm of singing in choirs and songwriting.  But solo voice was not.  Those are all completely different things.  Therefore, the piano emphasis.

The fact that I was an education major doing something that was kind of expected of a performance major (auditioning for Concerto Aria) made me extra nervous.  I felt like I was out of my league.  But I said I was going to do it and when I say I'm doing something, I do it.  You guys know this.

Practicing and preparing was quite the experience.  Getting my fingers to do the things this music asked of me was torture sometimes.  They can't move this fast, I would yell in my mind.  I spent many days in Ford Music Hall working on the same 4 measures over and over and over.  I cried.  I angrily played the keys.  I probably threw music on the floor.  It was so hard.  Music already has a default amount of emotion running through it, but then to take it, learn it, and make it your own, you're just adding to that emotion.  It sucked everything out of me.  But it gave me so much in return.

The day for auditions came and yes, I had learned it.  Those 29 pages were in my fingers, in my memory, and in my heart.

It didn't go so well.

I mixed stuff up.  I fumbled through some passages.  Things weren't clean.  I played it, but it was sloppy.  I remember getting done and feeling like my brain was telling my hands to get with the program and catch up, but they just couldn't.  It wasn't awful, but it wasn't good enough.  I didn't make the cut.

Although the professors totally made the right decision based on my audition, I was devastated.

The next time I was home with my parents, I sat in the back room and cried about it.  This was my only chance to ever play with an orchestra behind me.  I wasn't a solo piano performer and I didn't really want to be.  This was the time to do it.  I asked so many why questions.  Why didn't I play it like I did that one time in my lesson?  Why did I miss those accidentals that I never miss?  Why, why, why?  There wasn't really an answer.  Just like anything else in life, some days are just off days.  Things don't always work the way you know they can and the way they normally do.

I went to Concerto Aria that year and listened to Kara, the pianist that made it.  (I think she was the only pianist, but I can't really remember.)  Her performance was beautiful.  The concerto she played is still one of my most favorite pieces now.  She totally deserved it and did a great job.

So when I heard my concerto coming through those radio speakers a few weeks ago, my brain flashed through all of this, hence the tears.  It was such a journey for me.  I would love to be able to work that whole thing back up someday.  But so much of me thinks, there's no way I could do it without Dr. Bell.  And honestly, it's half true.  I'm sure with lots (and lots) of time, I could eventually crap my way through it again.  But I don't think I'll ever be able to play it the way I did on my best day under the direction of Dr. Bell.

Oh, the things that woman taught me.  I became a different pianist because of her.  I left college with knowledge I never could've imagined I'd have.  I owe so much of what I know to her.  And to her push.  She didn't accept halfway and I certainly didn't want to give her halfway.  I wanted her approval.  When she gave you a compliment, it was a big deal.  It made your whole day.  She didn't just hand them out.  You had to earn them.

Along with Dr. Bell, my friends and family played a vital role in this experience as well.

As silly as it sounds, they believed in me.  There were a few times when visiting home on the weekends that my mom would set up the keyboard next to our piano and play the orchestral part along with me, just like Dr. Bell did in my lessons.  (That in itself could make me cry just thinking about it.)  What a special memory I have doing that with her.

My friends would sit on the floor in Ford Music Hall and just listen.  They'd bring their homework and provide me company while I practiced.  All you folks with "normal majors" can study together.  We piano majors can't bring our pianos anywhere we go.  We're pretty limited.  So my friends came to me.  They brought me coffee and they said I was the best piano player they'd ever heard, which is only because they haven't heard enough piano players.

Listening to that concerto the other night just brought all of this back to me.  Isn't it amazing how much can be wrapped up into one piece?  A million thank yous and a million things I learned and a million wonderful moments - all in Grieg's Concerto in A minor.  Those 29 pages aren't really in my fingers or memory anymore, but they are still in my heart.
Posted by Claire@MyDevising at 2:42 PM