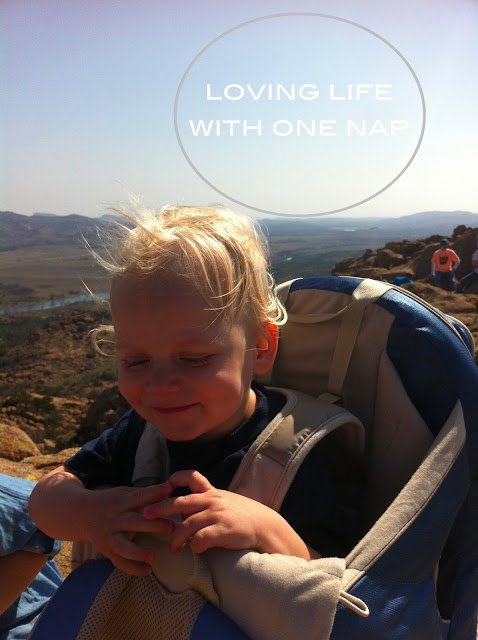 After saying goodbye to the morning nap about 2 months ago, I'd say we've both fully adjusted to just one nap each day.

For the first few weeks, it was almost necessary that we got out of the house each morning to do something - deposit a check,  go grocery shopping, browse around in some thrift stores.  It's a long time to be up and it helped break it up a bit.  Now, Duke's got the hang of it.  If it's a rainy day and I'm really wanting to stay in, he's totally fine with it.  We read lots of books, sing lots of songs, play with lots of toys, and if we run out of things, a bath, a run around the neighborhood, or an episode of Curious George are there to save us.

Something I've noticed is Duke's flexibility with this nap.  On average, the nap is 2.5-3 hours, but it has ranged from 2-4 hours.  Although the length of this nap can affect his level of fussiness, it usually doesn't.  This is nice.  I'd always prefer a 3 hour nap, but if it doesn't happen, it doesn't completely ruin the day.  (Certainly a perk of babies getting older!)

Along with the flexibility in length, there's a flexibility in the actual nap start time.  I've put him down anywhere from 1:00-1:45 and it doesn't seem to influence how long the nap lasts.  He typically goes down around 1:15-1:30 though.

One thing I've learned about the afternoon nap is that I have to have patience when Duke makes noise.  It's rare if he sleeps a solid 3 hours without making a peep.  Usually, there's a bit of talking or fussing at some point but he always goes back to sleep.  Since it's his (my) only break in the day, it's important that I give him the opportunity to have the optimum rest time - whether it's sleeping or just hanging out in his crib.  If I hear him wake up a little early towards the end of nap time, I wait a bit before going to get him.

I wasn't sure what I'd think about going down to one nap.  I liked having two breaks in the day.  But I will say, it's much better than I expected.  We can meet friends for play dates and run several errands without having to worry about getting back home.  I'm loving the one-nap-a-day life!
Posted by Claire@MyDevising at 8:46 AM