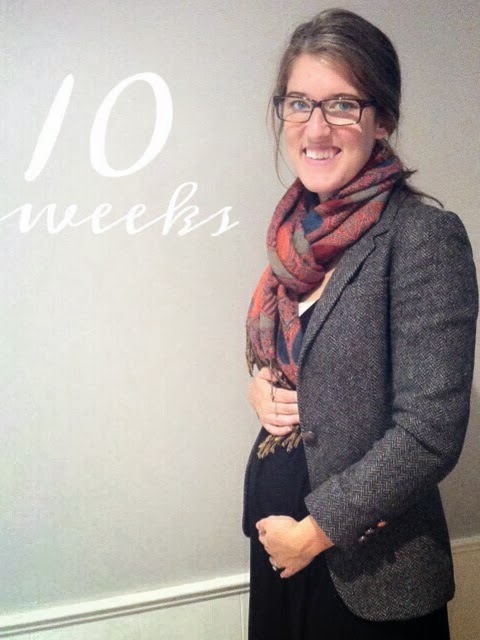 Now that I'm almost 15 weeks and officially out of the first trimester, I wanted to share a few scattered thoughts.

-The day after we found out I was pregnant, I got a bad stomach bug.  My initial thought was, Is this how this pregnancy is going to go?  What have I done?  Once it was gone and the sicky stomach feeling continued, I knew that was from the pregnancy.  It was a rough way to start out.

-Nausea has been a killer.  But I haven't ever thrown up, so that's something.  I spent the first few weeks waking up nauseous and spending the rest of the day nauseous.  From about 6-8 weeks, mornings were okay, but once late morning/early afternoon came, the nausea hit.  From 9 weeks on, it's been pretty good until about 4:00 or 5:00 in the evening.  I've taken Zofran when necessary, but we all know the downsides of that.  Pick your poison, I suppose.  (I remember feeling a bit nauseous in the mornings while pregnant with Duke, but it quickly subsided within an hour or two.  So the nausea this time around has been quite a shock.)  In the past week or so, I've gone full days without feeling nauseous, so I have hope!

-I lost 4 lbs since the beginning of pregnancy to the end of this trimester.  I've had an appetite but have wanted only specific things.  Fast food has been my best friend, along with meals at other people's houses.  If I didn't smell it or make it, then I could eat it.  Everything in and from my home made me gag.  It's amazing how overwhelming and draining it has been forcing food down my throat.  Many meals in the first few weeks consisted of either rice or chicken noodle soup.

-Sleep was my best friend.  When Duke's nap came each day, I didn't think about sitting down to blog after tidying up and getting my house back in perfect condition.  I left all the messes and all the unwritten words and I went to bed.

-Along with that thought, it's interesting how being sick for an extended period of time makes you re-prioritize things.  After being conditioned to blogging around 3 times a week, making my bed every day, keeping the house picked up, etc., I was shocked to find I was paralyzed when it came to anything else besides existing.  My goals for this trimester?  Sleeping, trying to eat, keeping up with our schedule, and attempting to stay active with Duke.  In other words, Colt has been my hero.  He's helped with things like laundry, meal planning, and cooking when, typically, I take care of those things.  He jumped in and was ready to help.  I'm so grateful for him.

-I haven't really been exercising.  I have a marathon relay coming up this Sunday and I will be the slowest in our group by many minutes, no doubt about it.  I've tried to run once a week and only a couple weeks have I managed to do it twice.  That's a pretty terrible "training schedule," but I've been all about survival lately.  I'm definitely planning on walking some of the race, but I still would love to finish around the 55 minute range.  (After working up to an awesome mile pace this summer, it's definitely suffered a bit in the past 2-3 months.)  Truly, I just want to finish and feel good about it.  I ran a 10k when I was around 12-13 weeks pregnant with Duke, so I have every reason to believe I'll be just fine running 5 miles being 15 weeks pregnant.

In the first trimester, it took everything I had just to get to the end of the day.  It's been rough - especially since the show must go on with a 2 year old.

I'm all about being normal and tough and not falling into cliche pregnancy land of sending your husband to Taco Bell and "having" to take naps.  But this time around, I've totally been the stereotypical pregnant lady.  Not because I wanted to be, but because it's been kind of miserable.  This pregnancy has been very different in so many ways already. 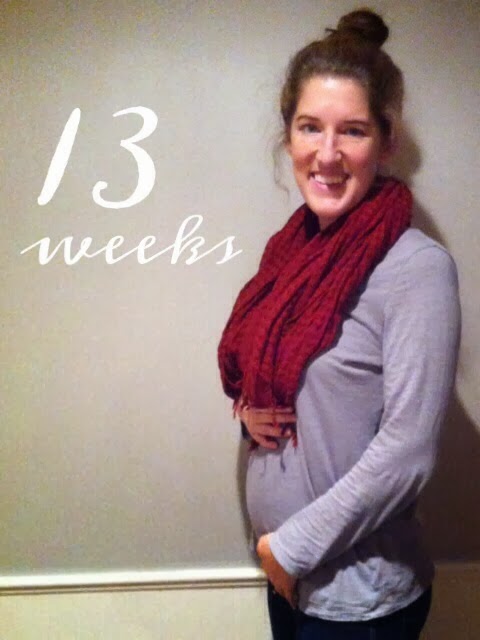 Although it's been hard, I know it's all worth it.  I can't wait to see who this little person is inside of me.  I'm really excited for the belly, the flutters, and the gender!  Onto week 16!
Posted by Claire@MyDevising at 3:21 PM