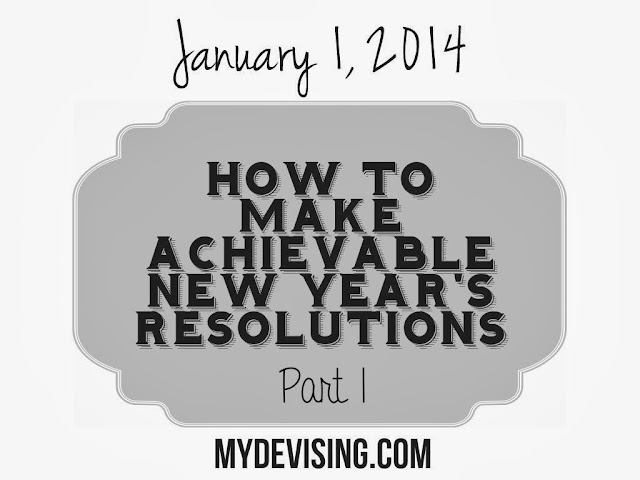 I'm all about New Year's Resolutions, even though it seems like it's cool to be anti-New Year's Resolutions these days.  Sure, setting goals at the beginning of the year is cliche.  Yes, "everybody's doin' it."  And I'm sure there's some blog post out there entitled "Why I Don't Believe in New Year's Resolutions" that went viral.  But I disagree.  I think not having any goals is a boring way to live.  I also think most people who do have goals but don't write them down won't get them done.  I don't have statistics to prove this, so don't stone me.  It's just my own personal observation.

If you find yourself getting to the end of the year, feeling like you didn't really do anything, maybe that's a sign you aren't a goal setter.  If that kind of feeling doesn't bother you, then press on, my friend.  But if it does, maybe you need to learn how to set goals.

If you haven't had success with New Year's Resolutions in the past, maybe it's not a personal issue.  Maybe your goals stink.  I mean, they probably all come from a good place with good intentions, but maybe they're just not realistic or attainable.

Here are my goal setting tips:

DON'T SET TOO MANY
Losing weight, running a marathon, getting rid of all debt, writing a book, and becoming paleo-gluten-free-vegetarian-south-beach-diet-whatever-else may not be a good idea.  That's kind of a lot.


BE THOUGHTFUL
What do you really want to do or accomplish?  Don't say "read 5 books" if you don't really want to.  Pick the things that nag at you, that are obvious to you, and that come to mind often.

BE SPECIFIC
For example, if you're wanting to get into running, maybe you should say "run a 5k."  That's a doable goal and it comes with a timeline.  Just having "start running" on your list is really vague and kind of overwhelming.  Another example:  If you're already a runner but want to be faster, write down the mile pace that you hope to achieve by the end of the year instead of just "run faster."

WRITE IT DOWN OR TELL SOMEONE
Accountability is key.  I use this blog to keep a record of many of the things I hope to accomplish.  I have the desire to get them done, but knowing they're out there for all 100 of you to see makes me feel just a little more pressure.  But it's good pressure.  You may need someone to give you that extra push.  Keeping your goals a secret is never helpful.

After setting your goals, the next step is getting started.  If you want to write a book, start writing something.  If you want to learn how to play guitar, do your research and find a teacher.  Things do not fall in our laps.

Then, finish what you started.  I love this quote:

"Much of the stress people feel doesn't come from having too much to do.  It comes from not finishing what they've started."  David Allen

I completely agree.  Work hard and make progress every day/week/month until you've accomplished the task.  It's always worth it.  The hard work in the moment is way better than having unfinished business weigh on you.

As I look back on my New Year's Resolutions from last year, it's exciting to see how many of the things I actually did stick with/accomplish.  (A detailed post about how I accomplished my 2013 goals along with sharing my 2014 goals will be coming in the next few weeks.)  As the years have gone by, I've gotten better about determining my goals.  From the list above, being specific is probably the one tip that has helped me the most.

So if you've always stayed away from resolutions for fear of not being successful, this year is your year!  Take some time to think about it and set a few goals for yourself in 2014.

Are you a natural goal setter?  Do you usually stick with your resolutions?  What are some things you're planning on doing this year?

Posted by Claire@MyDevising at 2:50 PM