I know you're lullaby-ed out, so this post is completely unrelated to lullabies or Kickstarters or music.  (BUT - we do have less than 24 hours to reach our Kickstarter goal.  Help us out here!)

Remember when I talked about running 5 miles in a marathon relay?  Well, I didn't do it.

It's so not me to back out of things.  I could hardly stand it, but I knew it was the right choice.

As the severe weather became a reality, I started getting doubtful.  But I wouldn't dare say anything.  I knew if I expressed the slightest bit of doubt to these girls that they would totally be willing to get out of this thing - not because they're flaky, but because I'm really intense about doing things I say I'm going to do.

Jenni texted me on that Friday and said she was concerned about running on slick roads.  I had really only considered the danger of driving and the extremely cold temps ... not the fact that we may actually fall and break things.  Plus, being with child makes that even riskier.


I thought long and hard immediately texted all of the girls.  It went a little something like this:

Me:  Hey peeps!  So, minus the crazy cold weather, the slick roads for driving, our unpreparedness, and Kelsi's sinus infection, there's still the fact that we are going to be running ON the slick/wet roads.  Maybe we cancel.  Thoughts?

The emojis of applause and praises came pouring in.

Kelsi said it was the best $40 she ever wasted.
Jenni said she was 100% okay with letting others take the spotlight on Sunday.  (So kind of her.  Because we all know we were going to win.)

The next morning, the day we were planning on leaving for Tulsa, the text messages continued.

Karlie said how thankful she was that she wasn't running because she had just eaten 3 donuts.
Jenni said she crossed "FIND TOE WARMERS" off of her list.
Megan said she loved being in her cozy, warm house and then used a lot of exclamation marks.

Jenni ended our group text on that day with, "Excellent decision all the way around.  Go team!" 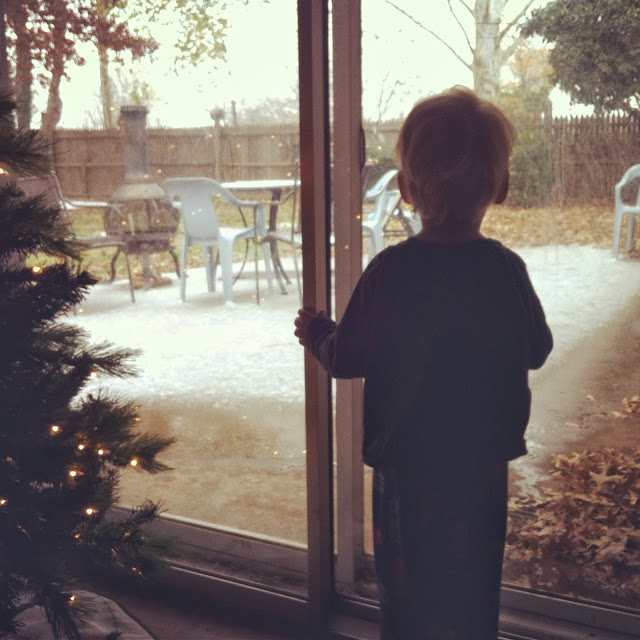 As the freezing rain and sleet pelted our living room windows on that Sunday morning of the race, I couldn't be happier that I had chosen to stay home.  I love running races and I love feeling accomplished, but, honestly, I would've spent the entire time worrying about my little babe in my belly.

I think when God really wants me to not do things that I've said I'm going to do, he goes to extreme measures.  Like allowing my foot to be injured so I didn't run the half marathon when I was pregnant with Duke.  (That race also ended up being crazy cold and everyone got hypothermia and almost died.)  He's saved me from running in ridiculous weather while pregnant twice now.  My kind of personality obviously needs some drama to happen in order for me to back out of things.

Did any of you push through and run the Route 66 in Tulsa?
Posted by Claire@MyDevising at 4:07 PM