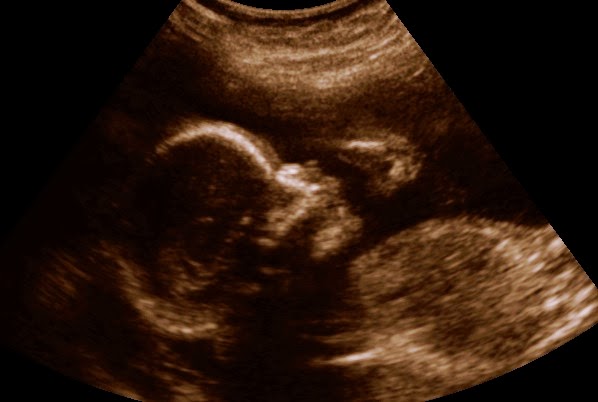 Before this pregnancy, I was having doubts about ever having a girl.  Not that I didn't want one, but I had a feeling I was maybe going to be a "boy mom."  But after seeing how completely opposite this pregnancy was from the last, I became pretty convinced it would be a girl.  However, we were still just as thrilled when the ultrasound tech said, "Well, guys.  Things are lookin' pretty girly to me."

Duke believed it was a sister from the start (even though he kind of has no idea what that really means).  But the day we began telling him that it was, in fact, a sister, he insisted, "I wan brudder."  Welcome to toddlers.

It was at this very moment last time around that it all became real to me - I was having a baby and it was a person and it was a boy.  This time, the same emotions came rushing in.  Knowing that I'm carrying a little girl who's going to be my little buddy in new and different "girl" ways is so exciting.

As of now, we are blessed with a sweet baby girl who is very healthy.  But with all of the other differences in this pregnancy, it's no surprise that she's in breech position and my placenta is borderline low.  I know there's still plenty of time for things to turn around (literally) so I'm praying that will be the case.  I would really love to have another natural birth.

Now that we're at the halfway point, we're beginning to think of names, dream about what her room will look like, and attempt to reorganize every inch of our house like all you other crazy pregnant women.  (Isn't it nice to finally be able to blame your overly-organized tendencies on nesting?)

We're so thankful for this new life!
Posted by Claire@MyDevising at 10:32 AM