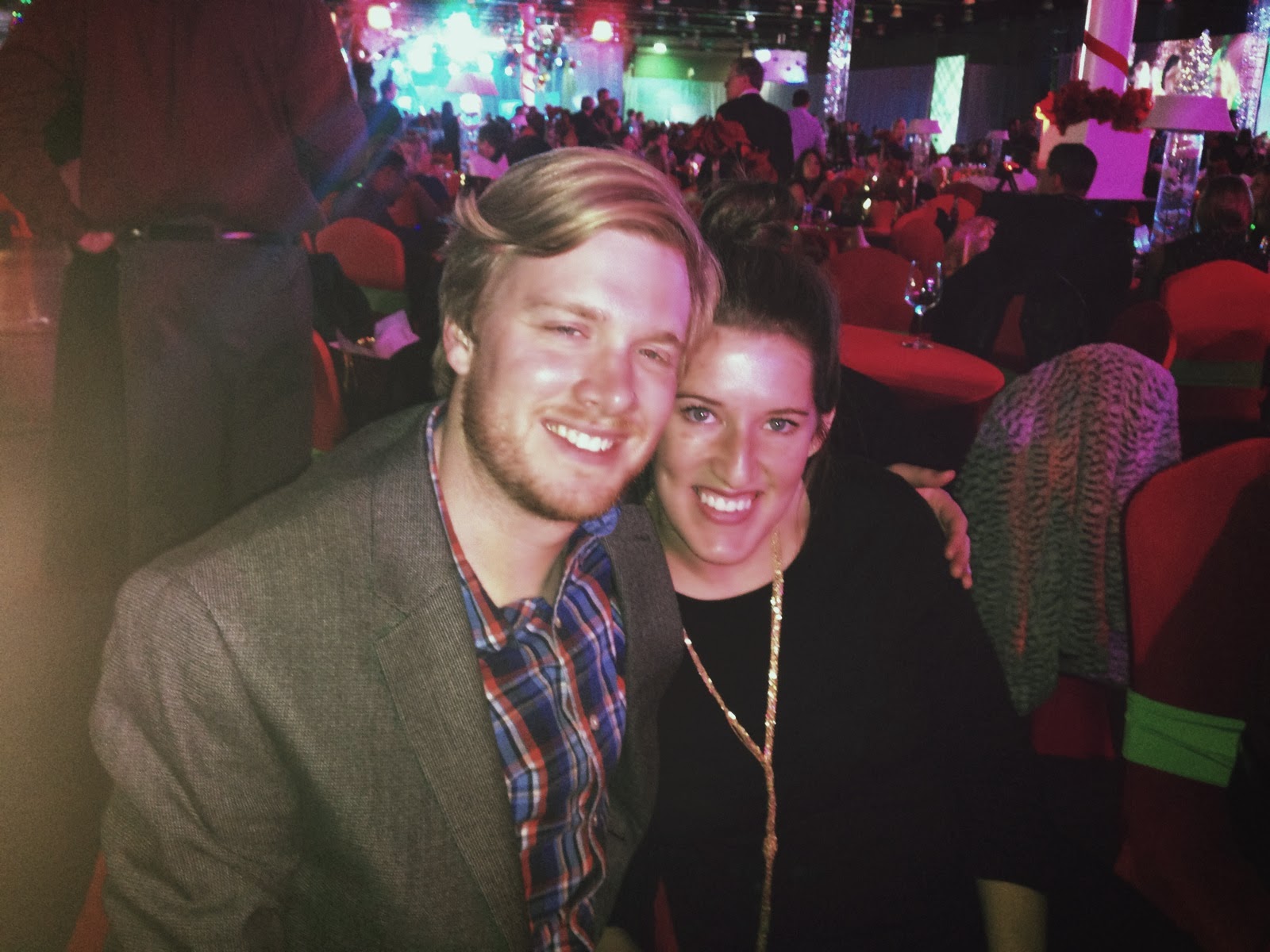 (Colt and I at his work Christmas party this past December.)

I'll never forget our first Valentine's Day together in 2007.  We had been dating for about 2 months and were "official" for about 1 month.

We weren't serious enough to make big plans but we weren't nothing enough to play it cool.  (I mean, in my head we were serious.  I was ready to marry this guy months before he even verbally expressed his interest in me.  This was evident by my many nights crying in the shower, wishing Colt would just love me.  How hard could it be???)

(Turns out, it is kind of hard to love me sometimes.)

Anyway, Valentine's Day was on a Wednesday, which meant Colt had responsibilities leading music for a church in the city.  So evening plans were out.  We rebelliously skipped chapel that day, and he took me to a wonderfully romantic breakfast date at IHOP in Shawnee during the 10:00 hour.

I think I made him a card on construction paper in return for my "quick 2 egg breakfast" he bought me.  Like I said, we were keeping it chill.  Nobody can be TOO into the other at this point.

We had a great time and I loved spending my morning with him.  (To this day, breakfast dates are some of my favorite dates we go on.  Maybe it's because I love starting my days with him - looking at him, talking with him.  Or maybe it's because I just can't ever get enough hollandaise sauce and hash browns and bacon.  Either way, I love breakfast dates.)

I'd love to have a picture to show you how young and in love we were but I don't.  Mainly because we were carrying razors (not a thing to shave legs but rather to call someone on) as phones and their version of a "camera" was kind of a joke.  But also because Colt's lip was huge that day.  I mean, monumentally huge.  He woke up with a swollen lip and was clueless as to how it got like that.  I was pretty taken aback by it myself.  It was a moment of questioning for me,  do I really like this guy?  Swollen lip and all?  But yes, I did.

(His lip eventually returned to normal and all was well.  We still have no idea what that was all about.)

I don't know what I'd do without Colt.  I just really don't know.  He has played such a role in who I am today.

I love my life with you, Colt.  Happy Valentine's Day!
Posted by Claire@MyDevising at 9:20 AM