our 6 year relationship with a pig valve 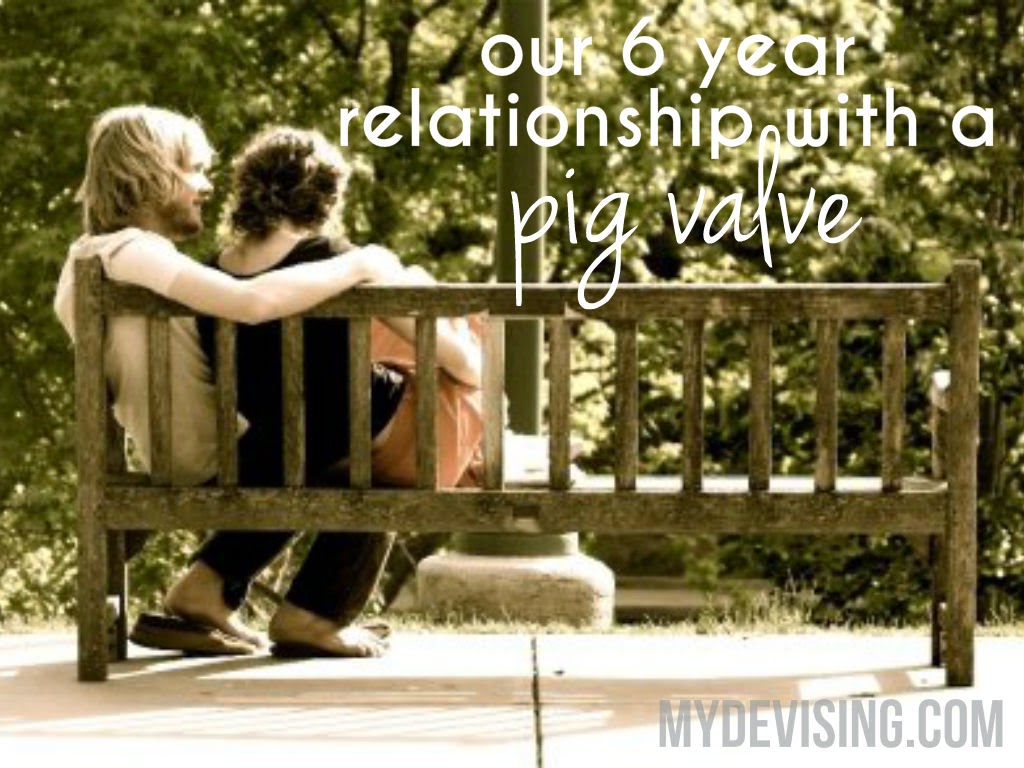 (one of our engagement pictures from 2008 by Lisha Myers)

One of my first posts on this little ole blog had to do with Colt's heart.


I guess you could say there was a thin layer of cynicism that was stripped away after Colt's aortic valve replacement in 2008 (which was replaced after an attempt at repair in 2006).  Yes.  That's 2 open heart surgeries for a healthy kid in his 20s.

I've told little miniature parts of his story (here and here) but not a ton.  Mostly because thinking about his heart makes my stomach churn.

Colt's first surgery in 2006 (our junior year) happened a couple of days after our first date, a few weeks after he told me he liked me, and a few months after I started my habit of crying about him in the shower.  (Although I didn't know it then, I was already in love with him.  I wanted him so badly to be mine but I had no idea how he felt about me.  So, I cried in the shower.  That's what girls do.)

(I also left our apartment living room full of girls to go cry in the closet after he left for his surgery.  I threw myself on my pile of dirty clothes in desperation.  Sounds dramatic, but I really liked the guy.)

To say that was an emotional and intense beginning to our relationship is an understatement.  I was an absolute wreck.

His mom called me throughout the day and kept me updated.  But when I finally got to talk to Colt a couple of days after the surgery, I remember feeling like I was flying.  I know how ridiculously romantic and cheesy that sounds.  But, guys, I'm crying now just thinking about it.  I could finally hear the voice of the guy that I liked (loved) and I could know with my own ears that he was okay.

His surgery was over Christmas break and I'll never forget my drive home from OBU that December.  "Goodbye" by Patty Griffin and "Girls and Boys" by Ingrid Michaelson were on my mixed CD I was listening to.  I cried the entire way home.

Lots of lyrics about hearts and ribs and sadness.  Totally emo but totally made me sob.

I was greeted at the door by my mom who had no idea that I had just spent the past hour bawling (except that maybe a blotchy face and red eyes gave it away).  But besides that, I believe all moms have some kind of super power that gives them a pathway into their kids' souls sometimes.  Even though Colt and I were barely even "a thing," I think she knew how serious it was and felt to me.  She gave me a huge hug and all the tears came flowing out again.

Thankfully, I got to go up and see him a couple of days over the break in Stillwater.  I know it was probably a crazy thing for my parents to let me do.  We're going to let our daughter go see/stay at the house of the guy she likes, but isn't officially a couple with, surrounded by an emotionally charged situation?  (Yes, you are.)  And they did, and I'm so grateful.  I have no idea what their thought process was, but my guess is that's one of those parenting moments that maybe you just have to go with your gut and trust that you're making the right decision even though it feels so vulnerable and uncomfortable.

But that time in Stillwater was life determining for us.  (After getting engaged, Colt said he knew he was going to marry me when we were brushing our teeth together in the bathroom one night over that break.  I love when he reminds me of that moment.  It was a tiny one, but yet such a big one.)

We spent most of our time there sitting and talking.  One night, Colt attempted to start some episodes of The Office, but after a while, I said, "Could we just talk?"  I just wanted to know him.  I could never tire of hearing him talk or laughing with him.

Colt recovered from that surgery and was back at school for J-term a couple of weeks later.  (He was crazy.  Now that I'm a mom I have NO IDEA how Jill survived him going back to school so soon.  I'm sure she prayed/cried herself to sleep.)

Fast forward to October of 2007 (our senior year).  Colt went back for a check-up and got some pretty awful news.  Another surgery was needed.  The repair wasn't holding up, and he would need a replacement.  This opened up a new chunk of questions.  Would we go with a mechanical valve that lasted longer but meant that a less-active lifestyle and blood thinners would be crucial?  Would we go with a pig valve that would allow Colt to be the runner/climber/adventurer that he is but that would only last 5-10 years before needing surgery again?

It was tough.  But I believe God used the doctor to make our minds up for us.  He said, "If you were my brother, I'd tell you to go with the pig valve."  That pretty much sealed the deal for me.  Really, how much of a "life" would Colt be living if he couldn't DO all of the things he loved to do?  A mechanical valve would suck some of that joy away.  A pig valve was the right decision.

There was an inkling of hope that a miracle had happened.  Since we found out he needed surgery again, there were many moments I would put my hand on Colt's heart and pray for healing.  I really thought God might decide to make a miracle out of Colt.

But that March, his valve was still in need of repair.  They checked it one last time before wheeling him off to surgery.  I was kind of mad.  We were going to have to go through with this and God didn't answer my prayer - my really persistent, expectant prayer.

The waiting room experience was awful.  I'd never wish that on anyone.  But seeing Colt - the man of my dreams, my fiance of just a few months, a healthy 21 year old, the definition of strength to me - on that ICU bed with a tube down his throat and absolutely no ability to communicate with me was devastating.  I can hardly type this, as it's hard to see through my tears.  When it was time for me to go, he reached out, grabbed my hand, and his eyebrows said the rest.  Please don't leave me.

I felt a rush of warmth and panic come over my body and I blurted out, "I need to sit down."  His mom found me a chair which saved me from passing out.

I had never known that kind of pain before.  The pain of watching the person you love the most suffer.  There was nothing I could do.  I just remember stroking his face and hair, holding his hands, and talking to him.  That's all I could do.

After calling my friend, Jolie, bawling, it was time to get some sleep.  Jill and I spent that night in a lobby of some floor in the hospital.  When those ICU doors opened again, we wanted to be there.  We got kicked out of our little area by a security guard and somehow found ourselves on the maternity floor.  I don't really know what happened after that, but I do know that we continued to see Colt every chance we could.

Once he was moved to a normal room, things began to feel more hopeful.  He was still in tremendous pain, but he was Colt.  He could talk to me, he could smile, and he could laugh (gently, with a pillow  hugged to his chest).

Again, like a crazy person, he returned to school pretty quickly after surgery.

At 21 years old, I got a quick dose of grow-the-heck-up.  It was a serious time, but I'm so glad I was able to be there for it.  There have been moments in our marriage that I think back on this, remember God's protection, and can look at Colt with those same eyes I saw him with in that ICU.  Sure, we get in fights and I get insanely mad at him, but many times, these memories enter my mind and my heart softens quickly.

When Colt left for his annual appointment this time around (2ish weeks ago), I wasn't as scared.  Mainly because my faith in God and understanding of his goodness have grown.  Of course, I had still been praying for a miracle as I do every year, that his valve would suddenly be made of human tissue.  It's a crazy prayer, but our God is a crazy God.  We're allowed to ask for crazy things.

Unfortunately, it's still a pig valve.  But the good news?  Everything looks the same (THE SAME) as it did 2 years ago.  (We didn't ever schedule an appointment last year.)  I was overjoyed when Colt called me and gave me the news.

Colt and I each have our thorn in our flesh.  Mine is anxiety and his is the pig valve.  Although these are completely different issues, they are things that will never go away.  (Unless a miracle occurs, which is totally possible.)  They will always need to be managed and watched over and contained.  Everyone has a thorn - the thing that plagues you and reminds that you aren't invincible, you aren't in control, and you need help.

Anxiety and bicuspid aortic valves suck.  They make me cry and they feel life-ruining at times.  But as annoying as it sounds, we are better for them.  No, we don't like them, the sting isn't lessened, we aren't naive, we aren't unfazed by the pain.  They're terrible, yes.  But we are made into different people because of them.  It's part of this whole sanctification process - learning to be more like Christ by suffering and suffering well.

I share this not to say LOOK HOW HARD MY LIFE IS because it could always be harder and I'm so thankful for God's protection and faithfulness.  I share it to say that LIFE ISN'T EASY JUST BECAUSE YOU TRUST IN GOD.  God never made that bargain with us.

I began writing this post simply because it was relevant.  Colt had just returned from Houston and I wanted to share his story (with his approval).  But as I got to the end, I felt a prodding to end with these thoughts.

With or without God, there's going to be some pretty terrible stuff happen to us.  Putting my faith in Him doesn't exempt me from a single ounce of pain.  We're all in the same boat when it comes to that.  But who I run to and how I process through my pain will probably look a little different than someone who doesn't have a relationship with God.  The process, the comfort, and the hope offer so much protection for me.  It's what causes me to genuinely think, I don't know how I would survive this life without God.  And that's not because I grew up in church or because I think that's the right thing to say.  I know it with every fiber of my being.

There truly is a lot to be thankful for.
Posted by Claire@MyDevising at 3:41 PM