bye bye, crib (and some thoughts on transitions)

From around January to March, my mind was lost in a whirlwind of decisions.  It felt like I was playing a game of Tetris - trying to fit everything in just perfectly and at just the right time.

I know this is a common issue, but the timing of baby Nova looked like it'd land right on when a typical toddler would be dealing with things like a toddler/twin bed and potty training.

Because Duke is a boy and because I've been advised not to force it, we haven't made any serious attempts at potty training.  I would hate to get it down and then have him totally regress when Nova is born (any day now!!).  So, I have committed to letting him lead the way on that one.

I had also planned on using this same approach with a big boy bed.  He hadn't ever crawled out of his crib - and that's due in large part to the fact that he sleeps in a sleepsack.  I will sing the sleepsack's praises until my dying day.  It's saved us from lots of things - like taking off clothes in the crib, removing diapers, smearing poop, climbing out, etc.  None of those things have happened and it's all because of the sleepsack.  And then a smidgeon of it is due to the fact that Duke really is a pretty obedient kid who likes to please and is, for the most part, a rule follower.  (He get it from his mama.)

But back to the bed.  I planned on waiting.

Until Duke stayed the night with his Jmama and Boat back in March.

They had a twin mattress out in a corner on the floor, ready for him to sleep in.  I looked in the room as I was walking out and froze.  They were going to experiment for me.  I love grandparents for this reason - they have no fear.  If he gets up, great, we'll put him back down, they say.  If he's not doing well, we'll pull the pack n' play back out, they say.  No big deal, they say.  I do not function that way so it actually turned out perfectly that they would do the honors of hosting Duke's first ever night of twin bed sleeping. 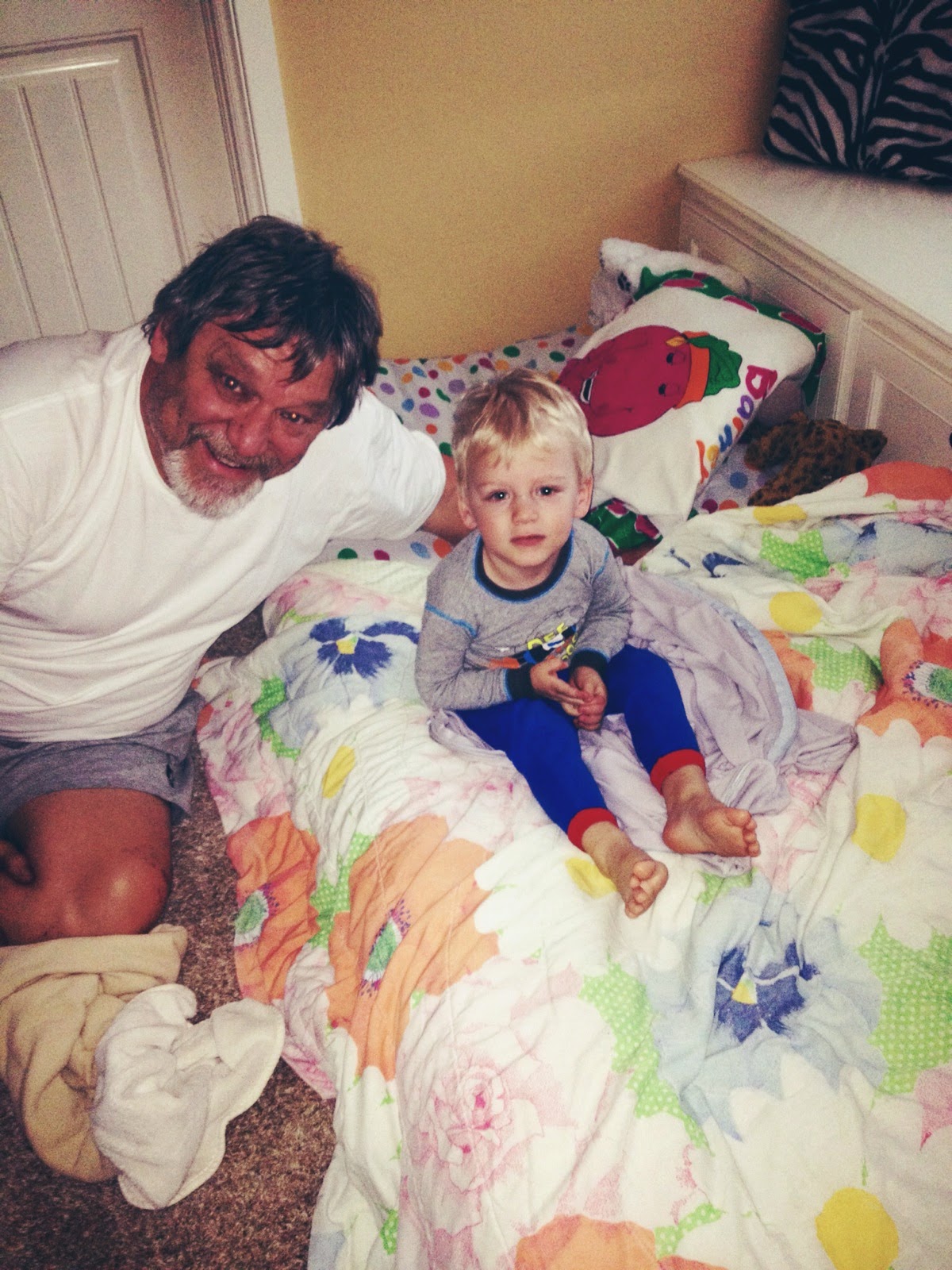 He did a great job - for both his night sleep and his nap!  So this totally threw me back into that whirlwind of decisions I had just reasoned my way out of.

But here's the deal.  We were already planning on moving Duke to his "new room" (AKA the old guest room) that same week.  So, I started thinking crazy.  What if we threw the twin bed in the new room and made it all one big transition?  So we did.  We said "Bye bye, crib," and went on our way.

It's been around 6 weeks now and it only really took Duke 3 nights to adjust to everything.  And I mean "adjust" pretty mildly.  He would call for me throughout the night, but he never once got out of the bed on his own.  Once, he rolled onto the floor (the mattress was sitting on the floor and I had pillows around it, so it wasn't anything crazy) and he thought he didn't know how to get back on the bed.  So he called for me and I showed him how to crawl back in.  (It melts my heart just thinking about that.)

This transition was far less stressful than I had imagined.  I was also relieved to know that we didn't have to buy another crib, and that Duke would be very acquainted with his new room and new bed by the time Nova arrived.

(Logistal update:  For a few weeks now, Duke has been sleeping with the box spring under his mattress and a safety bed rail.  He loves his bed and hasn't gotten out of it once.  Success!)

We made a big deal about moving into his "big boy room" with his "big boy bed" and he didn't even seemed fazed by it.  Maybe that's one reason why I started crying after we left the room the first night.  He's so big that it wasn't even a thing for him.  I kind of lost it for a moment there.  I mean, I was fine with reading "Tubby the Tuba" and singing "Jesus Loves Me" and "Twinkle Twinkle Little Star."  But walking out of that room and looking at his little body in such a big bed brought on a wave of emotions.  How did he get this big?  How are we even here?  How do I have a 2.5 year old?

I've barely been doing it for any time at all, but this raising kids thing is no joke.  When I said that I was going to cry for the rest of my life I wasn't kidding.  What an incredibly precious job it is to be a parent.  It seems that those feelings of overwhelming gratitude are magnified when transitions like these come and go - when you put your baby in the crib for the first time, when your baby sits up for the first time, when you stop breastfeeding, when he takes his first steps, when he says his first words, etc.  All of these moments cause us to stop and reflect because they're typically moments that we never imagined we'd see.  You just can't see a walking, talking person when you're holding an infant in your arms.  And then one day, it's happening right in front of you.

Although these transitions are normal and necessary for all children and their development, I think God was also thinking of us, the parents, when he decided life would go this way.  He lovingly gave us these big, mountain-like moments so we couldn't help but stop, sit back, and think about them.  In a way, He forces us to remember, to soak things in, and to try and slow down just a bit more.  We can't make time go slower and we can't return to the past, but we can be more present and more aware right now.  As each little transition has come and gone, I've learned more and more that while it's a joy to reminisce fondly on the little baby that Duke once was, I'm so in love with who Duke is now that there's no way I'd rather go back.

(Side note:  This book is one of our favorites and expresses this very sentiment.  Mamas, you need it if you don't have it already.  Go ahead and throw in a bulk order of Kleenex in your Amazon shopping cart as well.)

The conclusion?  Transitions are hard.  But each one puts us one step closer to seeing the person that our precious children are becoming.

(P.S. I put up a little poll on the left to see when you guys think Nova will come.  I mean, I know y'all aren't on the edge of your seats waiting for her arrival, but I did this with Duke and thought it'd be fun to do it again!)
Posted by Claire@MyDevising at 4:59 PM