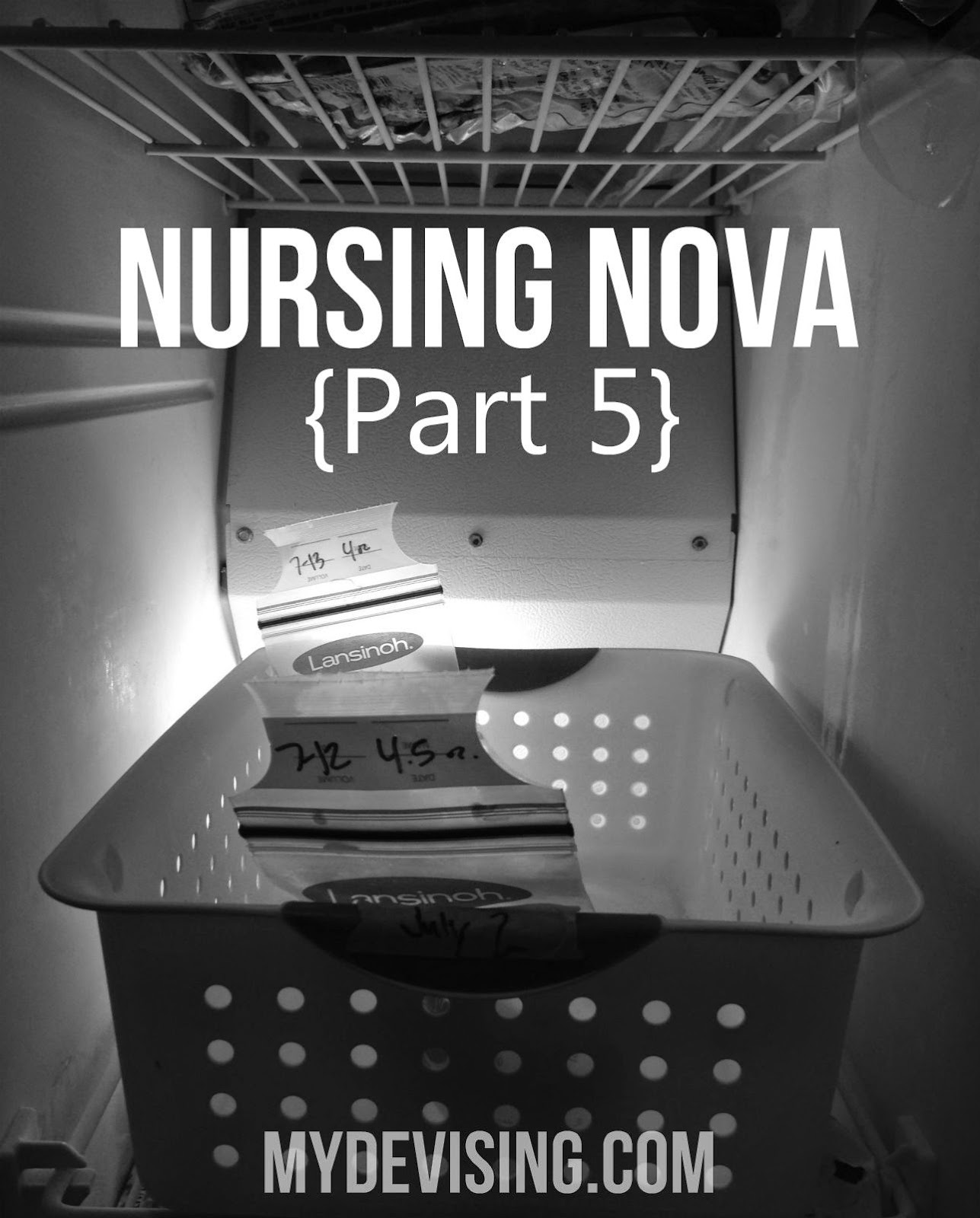 Nova not being able to nurse has been a hard pill to swallow.  It's actually opened up some other cans of worms that have been tough to deal with as well.

In the midst of this really rough season, I had a dream where I was trapped on an elevator with Nova.  It felt frantic, isolating, and frustrating - just like how feeding her felt.  I think by continuing to attempt to pump my milk, I was in my own self-induced trap.  I could get off the elevator whenever I wanted, but I was choosing to stay on it.  No one was making me choose breastmilk.

Regardless, saying goodbye to it was hard.

Pulling out the empty white bins in my freezer that I bought specifically for breastmilk storage made me cry.  Packing up the pump that I hated, but was so incredibly grateful for, made me cry.  Feeling a let-down and not responding by nursing made me cry.  I cried kind of a lot.  And I do realize that this "problem" of mine was a first world problem of sorts.  But it felt big, so it was big.  In my day-to-day life, I tried to think of the positive stuff, but in my home alone or in conversations with Colt or my close friends, it felt like the negative was overpowering.

I was very emotional when I fed one of Nova's first bottles of formula.  I told her that I was sorry I couldn't give her breastmilk, and that I did all I could do.  She looked at me with her pretty blue eyes and it was like she said, "Hey, mom.  You're being crazy, I love you, and all I really want is to be full."  And when I think about my own mom holding me as a new baby, I would've told her the same thing.  The fact that I was formula fed doesn't mean a thing to me.  My mom loved me and provided a safe environment for me to play, learn, and feel valued.  That's most important.

So after the surface of weepy emotions was wiped away, I hit the core of my frustration.

I began to see it all in a lengthy conversation with Colt one night.  After going back and forth, Colt got down to the bottom of my issues (as he always does when I don't seem to have the ability to).  I was mad that I couldn't nurse and I needed someone to be mad at.  I wasn't mad at Colt.  I wasn't mad at Duke or Nova.  I wasn't mad at myself.  So who was it?

I wasn't willing to admit that I was mad at God because, genuinely, I didn't feel mad.  But I discovered that I was hurt.  I was hurting and feeling like He just didn't really care.  All of those promises and prophecies and words of hope had not been fulfilled (in the way that I thought they would be).

Towards the end of my pregnancy, I prayed with 100% belief day after day that Nova would come.  Over and over - it didn't happen.  While she did end up coming, of course, the many days of hoping wore on me.

I had believed, claimed, and asked for a shorter labor (5 hours, specifically).  5 hours quickly became a silly wish.  But when I stalled at a 9, I kept pushing through.  I kept thinking, God is going to do this for me.  He's going to make it happen naturally, just as He promised, as I had believed, and as I've done before.  But after those 3 hours at a 9, I was done.  My body had surrendered and I couldn't have anymore.  I did not have a natural birth.

When the nursing issues began to surface, I prayed so hard that God would make this happen for us.  That Nova would learn and become stronger.  That her anatomy wouldn't get in the way of her ability to suck.  That I would be able to nurse her for a year as I had hoped and planned.  Colt prayed these things and my friends prayed these things.  But nursing Nova was not my reality.

It felt like a lot of things were taken from me.  I felt a little exasperated.  Maybe a little teased and tricked.  Could God have not just given me nursing?

Broken promises.  That's why I was hurt.  The promise-keeper of all promise-keepers had not been that for me.  I began wondering if God ever breaks promises.

My relationship with God reverted back to a 13 year old daughter/parent relationship for awhile.  I knew I needed him, but I didn't want to talk to him.  Or I'd start talking to him, then remember how frustrated I was with him, and stop.  A bunch of Nevermind!'s and *door slams* filled my heart.

Because God has an actual relationship with us, it makes things feel eerily human sometimes.  For example  - A big reason why I stayed distant for several weeks from him was because I didn't want him to win.  Oh, so you can just take things from me that I truly desire and ask for and mess with my mind and break promises and then I'm supposed to come crawling back to you with a loving and prayerful heart?  No way!

However, I've been so blessed to walk alongside so many wise women who have continually affirmed me and encouraged my honesty with the Lord.  It's okay to be frustrated or even take a break.  It's okay to ask God questions like, "Did you trick me?"  It's okay to tell him that you feel hurt and that you don't understand why he wouldn't just move his sovereign hand to make everything better.  They kept telling me that God is full of grace for this.  He gives us time to sift through everything.

I was still for God.  I was still Team God.  But I felt let down, disillusioned, hurt, and forgotten.

I was encouraged to really dig into the words I was given.  God literally didn't tell me that I would have a natural labor and that I would be able to breastfeed.  He told me other things that really easily lent to that interpretation.  Could it be that my interpretation and understanding was off?  Maybe God had other ideas?

After a lot of thinking, talking, and journaling, I landed on a few nuggets of information that helped me begin to cope with my supposed "promise" from the Lord:

-God is mourning with me and for me over this, just as any parent mourns with their child when he or she experiences loss.
-The world is just not perfect.  Period.  Not everything is because someone did it or because God allowed it.  Some things happen because the world is a messed up place.
-How we perceive God's promises to us or prophetic words can be flawed.  We don't think like He thinks and so our interpretation of things can be off.
-Maybe he's fine-tuning how I listen to and hear him.  Like how our children can sometimes hear what we say, but understand it to mean something different.  Sometimes we honestly mistake the words spoken to us.

Although switching to formula happened 2 months ago and the actual feeding of formula hardly ever phases me anymore, there has been some spiritual aftermath from these events in my life.  There is a lot of fighting doubt, working through anger, chipping away at cynicism - that kind of stuff.  Like I said earlier, I'm still Team God.  But I am in a dry season.

Even in a dry season that feels empty and confusing, holding on is right.  Let's keep holding on together.
Posted by Claire@MyDevising at 5:35 PM