After running my last 2 half marathons a little half-heartedly (the Route 66 and the one I did without training), I decided I wouldn't do another until I could really be hardcore and commit to some solid training.  I want the next half marathon I run to not only be a PR, but a PR that chops off around 15 minutes from my current PR.

So when it was time to sign up for the OKC Memorial Marathon, I thought I'd try to get a relay team together.  It'd be something fun to do with friends and a lot less pressure than a half.

We all got there really early to help get team members to their spots.  I knew I'd be waiting awhile to run, but I figured I'd be fine.  I had a granola bar in the car on the way and a banana about an hour and a half before I ran. 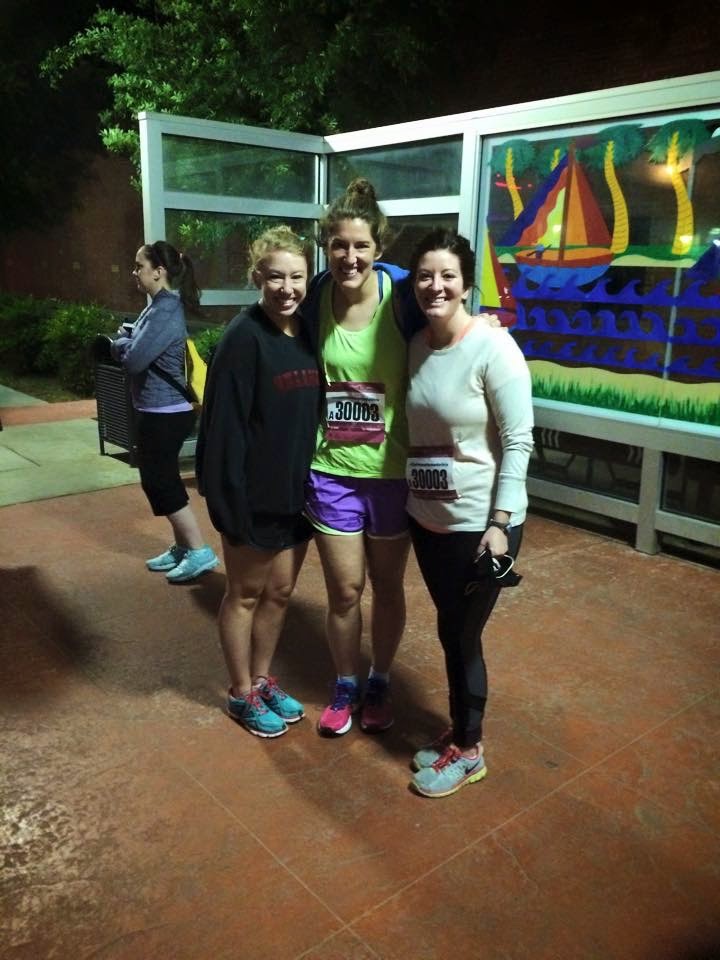 (tired eyes before the race)

DISCLAIMER:  I feel like this is a good time for me to interject that there will be much talk of poop in this blog post.  So if you'd rather not think about me and my poop, then this may not be the post for you.

So about that.  I went once at home and I went again when we arrived, before cheering Kelsey on past the start line.  I felt pretty confident in the pooping schedule at that point.  But when the shuttle dropped me off at my relay exchange area, it kind of hit again.  So I got in line for a porta potty.  But once I got inside, I realized there was no toilet paper.  Bad news.  I peed, but there wasn't really anything else I could do about the #2.  I thought I'd probably be fine since I had already gone twice that day.

As I got my headband on, adjusted my earbuds (the best earbuds for running), and waited for Sara to round the corner, I realized I didn't have my watch.  I FORGOT MY RUNNING WATCH IN THE CAR.  I could've just given up right then I was so mad.  My running watch is what saves me!  It keeps me on pace, it keeps me focused.  But I tried to be chill about it.  When Sara came running by, we exchanged the chip and I took her watch.  It wasn't a running watch, but it had the time and I'd take anything at that point.

The first 2 miles were fine.  I was sticking around an 11-11:30 minute mile pace, which was the plan for the first 2-3 miles.  Then it hit somewhere around mile 3.  I couldn't keep it in.  When I saw the next porta potty, I stopped.  I felt much better and continued on.  But after about another 1-2 miles, it hit again.  I knew I couldn't make it to the end.  Because of the awful feeling in my stomach, I wasn't able to go as fast as I wanted/needed to go at that point in the race.  So I stopped, felt better, and then booked it - like 9 min/mile pace - to the end.

After exchanging the chip with Karlie and grabbing some food, I walked over to where the bus was loading people in to shuttle them back to the finish line.  The bus was full, so I waited for the next one.  It pulls up about 20 minutes later, we all huddle together to get on, and I miss the cut off by about 10 people.  So I wait another 15 minutes for the next bus to show up.  At this point, we are all shoving and bumping and passive-aggressively mumbling about why we really deserve to make it onto this bus.  I started to understand why people get trampled at Walmart on Black Friday.

Once I was downtown, I needed to go again.  (I know, it's the poop story that never ends.)  I frantically told Colt that I had to go and he had to find toilet paper for me.  I was standing in a porta potty (fully dressed) leaning my head out to him as he was checking the other stalls for toilet paper.  He found some and came bolting over to me to hand it over.  He was not fast enough because I yelled, "Hurry!!!!"  After that bathroom stop, I can say that it was finally over.

My total time was 1:34.  If you subtract the 9 minutes I was busy in the porta potties, my real running time was around 1:25.  I know I could've done it in 1:20 that day, but whatever.  The frustrating part about the whole thing was that I felt GREAT.  My legs felt great, my heart felt great.  I was totally ready to bust out those 7 miles and do them way faster than planned.  But my stomach was not cooperating.

I had some rich food the day before the race, but in my defense, we always eat pretty rich food the day before.  My parents always have the kids and we typically meet friends for dinner and have some kind of date ourselves that day.  I truly think the main contributor to my issues was the fact that I ate something that morning.  I never eat before I run a distance like 7 miles.  I get up and head out the door to run.  My body does so much better on an empty stomach.  But for the relay, since I knew I'd be waiting around for a few hours before running, I figured I'd need to change up my routine.  Obviously there is some kind of balance that I'll need to find if I do this again. 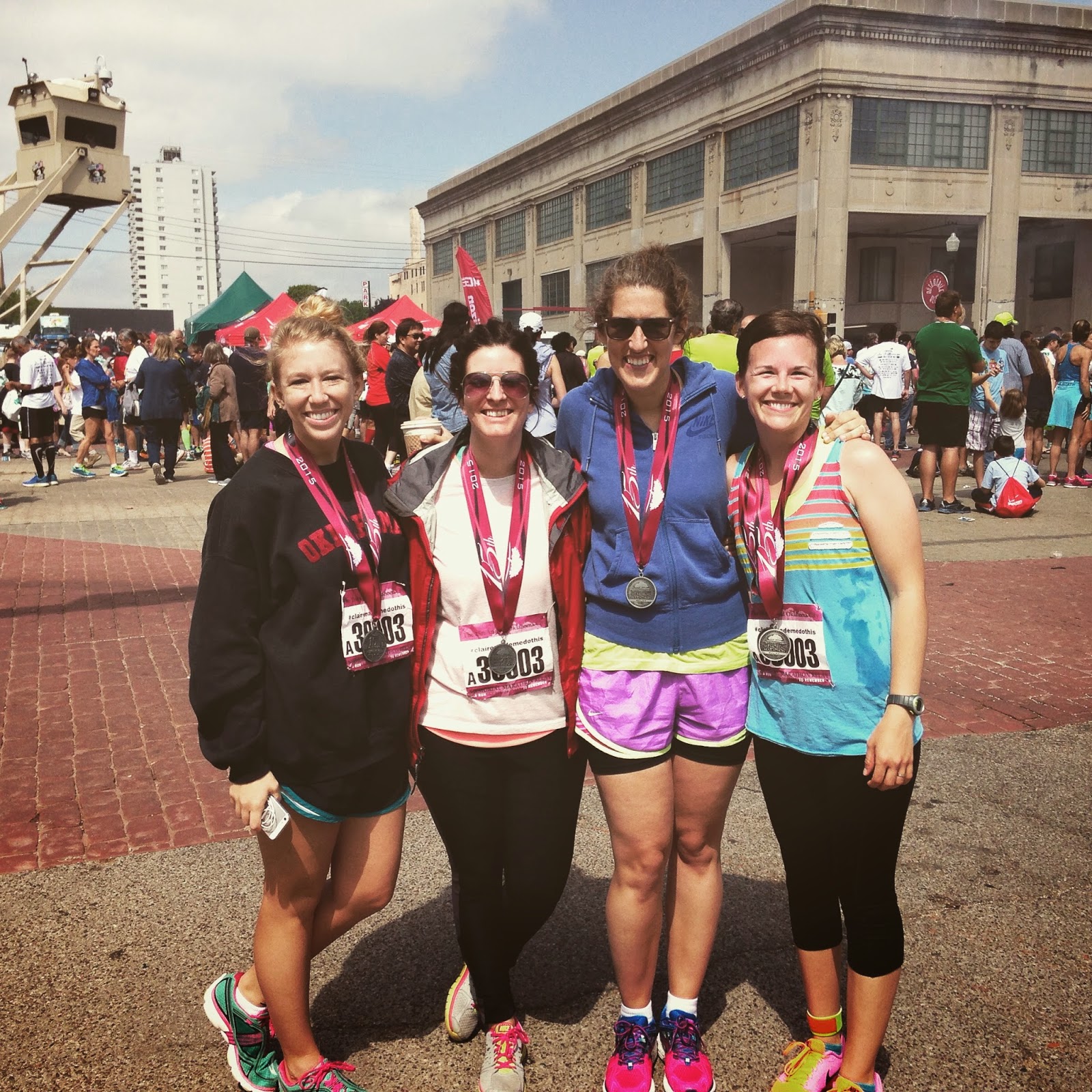 The next free Saturday I have, I'm going to run 7.6 miles to prove to myself that I can run it in the time that I had prepared for.  Also, I'm going to remember my watch.  And I probably won't poop 236 times.  And I'll probably remember to STRETCH before and after I run.  (Yeah, I forgot about that too.)  Seriously, running a relay messed with my mind.

But even with the disappointment of a crappy run, it was a fun morning and a new experience.  I loved seeing all of my social media feeds packed with runners and people who were out cheering us on.  It's such a fun race to be a part of.

Did any of you run?  How did it go?
Posted by Claire@MyDevising at 3:04 PM