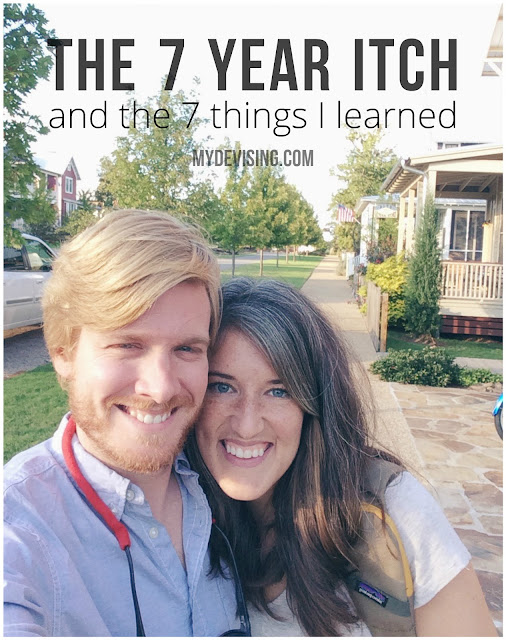 As it pertains to relationships, "The 7 Year Itch" implies that after 7 years, there is a decline in happiness and satisfaction.

Colt and I celebrated 7 years on October 10th and I would say that this year has been challenging.  It's been the most challenging.  Adding our 2nd child into the mix and dealing with the stress (and excitement) of a job change resulted in full plates.  For several months last year, we were both running on empty and it was just enough to keep ourselves going, let alone be concerned with the other.  We saw the affects of this, worked hard to get over the hump, and are more in love and respect each more than ever before.  These are some of the things that were highlighted for me in this past year of marriage, either through the lens of our own marriage or by examining the idea of marriage as a whole.

MARRIAGE IS A TEAM EFFORT

In our philosophy of marriage, there aren't many things that are viewed as "separate."  There is no yours and mine.  The kids are ours.  The house is ours.  The money is ours.  The decisions are ours.

One of my favorite things Colt says is, "Hey Team!" as he bursts in the door from work every day.  It's an instant reminder that this is not a me against him kind of scenario.  It's not about who had the hardest day or who is shouldering the most stress.  It's not a competition.  I don't have to defend why staying home with our kids full-time is an actual job that requires actual work.  He doesn't have to defend why running a company, while exciting and filled with some great opportunities, is hard and holds a lot of responsibility.

When you have husbands and wives who are loving and respecting each other, there's no need to pull rank or prove worth.  No role is more important than the other.  We are a team.

Most marriages we see in Hollywood are short-lived.  A lot of marriages we see portrayed on our TV screens are boring.  (Except for marriages on Parenthood.  That show wins the real life portrayal award.)  And beyond that, sex in marriage on TV is portrayed as comical, completely lacking of passion, and possibly even non-existent.  It matters who we listen to and who we watch.  If you take your cues from pop culture, you'll probably see your marriage as mundane and unexciting.  If you're surrounded by other couples who are loving each other fiercely and experiencing the satisfaction that comes with it, then you'll be encouraged and pushed in your own relationship.

One of my most favorite moments in our marriage will forever be when we went to California with the Watsons back in February.  We had a good, long talk about our marriage.  Things were fine, but they could've been better.  We weren't okay with okay.  This conversation was the perfect example of why community is important when it comes to marriage.  We were not designed to be happily married on our own without any help or accountability.  That's just asking for problems.  They asked us hard questions, we heard each other say things we didn't know the other thought, we apologized, and we talked about what was next.  (If you've never talked about the deep parts of your marriage with another couple, I strongly encourage you to do so.  We have several couples in our lives in which we can mutually confide in one another.  You'd be surprised to know what you find yourself and your spouse expressing in the company of other married folks you love and trust.  There's a safety and freedom that comes from that kind of conversation that you sometimes can't get to when it's just the two of you.)

While there is a certain privacy that should be kept between husbands and wives in marriage, there is also plenty of room to invite others in.  I would maybe even venture to say that community is not just a good idea, it's a necessity to having a beautiful, functioning, loving marriage.

MARRIAGE IS A CHOICE

I love the easy, perfect times of marriage but those don't come without being willing to fight through the hard, frustrating times.  Difficult things get thrown your way, but the bottom line is that marriage is a choice and love is a choice.  (This is not an anti-divorce statement.  There are plenty of circumstances when that is the best thing for all involved.)  You either push through or you give up.  You either choose to love someone else or you choose to love your spouse.  I know that's not popular in our "do what you feel and do what comes natural" society, but it's the truth.

We are surrounded by convenience in our world.  Sometimes I think we let that bleed over into relationships.  If this relationship is hard work, then maybe it's not meant to be or maybe I just shouldn't be a part of it anymore.  But anything great and rewarding in life requires a fight.  Our marriages are worth fighting for.

MARRIAGE IS KIND OF A BIG DEAL

Okay, actually marriage is one of THE biggest deals.  When I think about important decisions, I think about choosing to follow Christ first and then I think about marrying Colt.  You do not want to mess this "who am I supposed to marry?" deal up.  You do not want to marry someone because everyone else is doing it or because it seems like the next step or because you think it will fix your problems.  Those are really bad reasons for getting married.  I promise you - the heartache of calling off a wedding, sending back presents, and explaining what happened does not compare to the heartache of a failed marriage.

I knew at 22 when I married Colt that he was my person.  I knew with my whole heart that God was in it and that I would never find anyone else like Colt, and I didn't want to!  But now, I know all of that even more.  I can't imagine a better partner and I'm so thankful for Spirit's guidance and the support/encouragement from my friends and family back then.  They affirmed my decision over and over.  If you don't consider it a big deal when you tie the knot, then it will become an even bigger deal years later.  We must choose wisely.

I've got quite a guy.  A man who is the president of Walrus Audio and works hard at what he does.  A man who is a youth pastor on the side at our church and cares for those students deeply.  A man who comes in the door from work, ready to change the poopy diaper that I haven't had a free second to change, ready to keep an eye on the boiling noodles on the stove, ready to wrestle with kids on the couch, ready to hear about my day and encourage me.

Of course, to me, he's the best.  But I know many of you men out there who walk alongside some of my best friends in this same way.  There's only one common denominator and that is the Lord.  He holds marriages together.  He holds people together.  Maybe there's nothing "sexy" about 60 years of marriage, but there is something strong, intense, passionate, enduring, and refining about it.  And that sounds a lot better to me.

I'll admit, when we got married, "keeping God as the center of your marriage" seemed like a cute tagline.  A good idea.  I didn't necessarily grasp the weight of it, but I understood it to somehow be important.  While I think I will continue learning what that means in marriage, I will say that in 7 years, it most definitely is crucial in order to have a thriving marriage.  Same hobbies?  Cool, but not imperative.  Same musical taste?  Fun, but not important.  Same beliefs in God?  Hands down, a must.

Life will fall apart, things will crumble, and sin will try to creep its way into our marriages.  And when all of those things happen, it matters where each of us run.  It matters that you and your spouse are on the same page spiritually.  Where do you place your happiness?  Where do you place your trust?  Is it you, your spouse, or God?  That makes all the difference.

MARRIAGE IS MY DREAM

Although we are not perfect by any means, I do feel like we've learned and grown a lot in these past 7 years.  This year has been the hardest and my most favorite year of marriage so far.  It seems counter-intuitive for something to be the best and the worst, but with marriage it is true.  The more challenges we overcome together, the closer we grow.  The more opportunities we are faced with to trust in God and only God, the closer we grow.

I love you, Colt.
Posted by Claire@MyDevising at 3:17 PM