a problem with grace 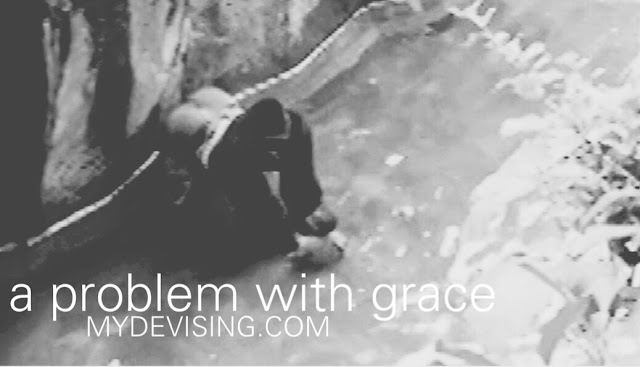 I have been stomach sick over this gorilla thing.

Partly because I am a mom of two little children who could very well have made this same mistake.

Because I'm not a gorilla or a little boy or a zookeeper, I naturally find myself sympathizing with the mother. It doesn't make me anti-animals or anti-take-responsibility-for-our-children. I'm just a mom who's sad for another mom. The truth is that we are all one step away from a horrific event like this suddenly happening. I don't for one second think I'm exempt. There is no bullet proof parenting method that protects our children from instances like these. This mother experienced a close call, and we all have those close call moments. They just aren't broadcasted to the world.

I have had one of my own close call mom moments. And I can't tell you the number of times it loves to creep back in, keep me up at night, smother me with guilt, and bring me to tears. Sure, nothing happened and everyone is fine. But those close call moments aren't forgotten by moms. It's almost unbearable for any mom to even hold the thought "I could have lost him."

But we did lose the gorilla, some of you may say. And you're right, we did. It's very sad.

Do I personally think this was handled correctly? Yes. I would shoot a gorilla to save my children and I'd shoot one to save yours. But the whole thing is still awful for all involved. It doesn't matter how you turn it.

So yeah, I've been sick about it because imagining my precious Duke in an incredibly dangerous situation that I cannot fix makes my stomach churn.

But the other reason this whole incident has been so disturbing is because of the universe's immediate reaction to it all.

What is it about our humanity that drives us to want to pick a side, condemn a person, judge a situation, and comment with our "If it were me, I would have _____" following a terribly devastating circumstance? It's like the grown-up version of bullying. Tearing someone down by pointing out all of their mistakes so that we can feel better about ourselves or our point of view.

What everyone needs is a good dose of grace here.

Grace to the gorilla for ... acting like a gorilla. (I wouldn't have thought I needed to say it either, but I have found that people are defending this gorilla. I'm not quite sure who they're defending him to, but I'm pretty sure we're all on the same page here. Gorillas will act like gorillas and are obviously not to be blamed for that.)
Grace to the little boy who, like many children, was curious and accidentally found himself in a very dangerous situation.
Grace to the zoo who had to make a hard decision. Grace to the person who saved a human's life but who still knows what it feels like to shoot an endangered animal. You wear two very conflicting badges by two different groups of people - Hero and Murderer. I can only imagine what a tough place that has put you in.
Grace to the mom for being a mom just like the rest of us. Grace to her as she replays this event in her head and navigates these next days being the target of judgement by many who don't know her.

There's a lesson to be learned. And I don't think it's about gorillas or parenting. It's about being the kind of person who gives grace first, not judgement. It is possible to look at this complex situation and find grace for all involved, whether we agree with how it all went down or not. We can still treat people the way they should be treated.

Back in high school, my grace tank ran on low a lot of the time because I so often failed to see my own shortcomings. That I had a problem with judging others. That I was far too critical of people. That I lived in fear a lot of times without even knowing it. Layer by layer, through growing up and through life experiences, my own issues have come into the light. A handful of layers were exposed in college and many more were revealed in journeying through anxiety. And then there are the thousands of layers that show up in motherhood. I've learned that I like control, that sometimes I resort to fear-based decision making, that I compare myself to others, and that I'm selfish. (And many more, but I'll spare you the list.)

No, I don't have the grace thing down. I'm still a work in progress. But I think once we see our own weaknesses head-on, our hands that once held stones release them and find a way to embrace the people around us who are hurting.

Take away the gorilla, the boy, the mom, and the zoo. Are you someone who gives grace?

If we find ourselves angry at one side, forming petitions, and casting judgements on those involved, it may not be because we're right. It may be because we have a problem with grace.

God, thank you for the many people who have loved me and have shown me grace even when I have made mistakes, lost my temper, said unkind things, been irresponsible, and made bad choices. Thank you for all of those people in my life. Please continue forming in me a humble heart that is fit to love and give grace to others in the midst of their mess.
Posted by Claire@MyDevising at 4:42 PM