taking the power out of panic attacks 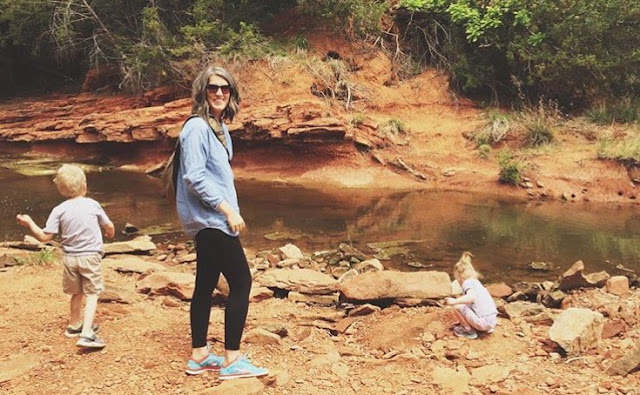 All I was doing was listening to a story that Colt was telling in the car. Nothing crazy was happening. But it doesn't always take something crazy to rev up panicked feelings.

I've had a few panic attacks in my life, all of which happened within the same 5 day period. They are awful no matter when they happen but they're especially terrifying when they happen for the first time and you have no reference point for them.

When panicked feelings come up in me now, I have tools for dealing with them. I had to dig these tools out during a conversation with Colt in the car just a few weeks ago. We were on our way to church on a sunny day. Colt was telling me a story that was semi-stressful. I say "semi" because it was only stressful on his end. I was simply a listener and the story had nothing to do with me personally. But somehow, I was triggered. Maybe I was feeling the weight of it. Maybe I was putting myself in Colt's shoes or another character's shoes in the story. I have no idea what actually occurred in my brain. But one moment I was fine and the next I was not.

There was nothing to panic about and no apparent danger, but my body was reacting and telling my brain otherwise.

After dealing with the panic the way I knew how, it subsided and was gone. Colt had no idea what was happening, but after he finished talking, I told him that I just fought off a panic attack.

As the days have passed by, I keep going back to that car ride. Moments like that don't happen often, but I wouldn't say they are rare either. I have had handfuls of almost-panic attacks and I knew what to do. But something unique happened this time. While the panic began to stir, this string of thoughts ran through my head: What if I had to start living like this again? What if anxiety hit me again and I had to deal with it every single day? I can't do it again. It's so awful and dark and hopeless. It makes life feel pointless and like it's not even worth getting up for.

All of the words tumbled in, uninvited, one after the other. I haven't been in that spot mentally in 4 years and I've forgotten what it feels like to think like that. It was as if the Lord was giving me a reminder. And I truly believe that moment and those thoughts occurred because I'm supposed to tell you about all of it. I'm supposed to share how panic attacks feel and how to fight them.

I want to help take away the mystery and power of panic attacks. Sometimes when we keep things stuffed away in a secret place, they grow into bigger, scarier monsters. I'd love to pull the Panic Attack Monster out of the closet, show you exactly what he looks like and reveal how powerless he really is.

(A quick note: This is not a "how to not have anxiety" self-help post. This information from my experience is specific to panic attacks, not anxiety or depression. If you are experiencing ongoing anxiety or depression, I cannot encourage you enough to see a counselor and get help. For some, managing panic attacks is doable and is the extent of the problem. And for others, more is needed. More was needed for me back in 2012. Do not feel inadequate if you are in the latter category. Getting help is a brave and wise decision.)

My mind was blown 4 years ago when my counselor told me that having a panic attack was up to me. I'm in charge of this thing? It was scary and overwhelming, yet also very empowering. So I'm telling you the same thing. You can feel the start of a panic attack without having it turn into a full-blown one.

So let's start at the beginning of a panic attack.

There's a trigger. Sometimes I can pinpoint it and sometimes I can't. The list includes but is not limited to unusually stressful or chaotic situations, feelings of being physically trapped, large amounts of conflict in the room, dark stories/movies on screens (Batman is obviously the reason for this), etc. Sometimes there is a reason why these feelings start up and sometimes there is no reason at all. But it's worth looking at what scene is set up for you when you begin experiencing panic. You may find common threads and be able to identify some triggers.

Next, you start feeling things. Usually the first thing I feel is a hot tingling run through my body from head to toe. Immediately after that, I feel short of breath and my heart starts racing.

Up until this point, there's nothing that has happened that has been within my control. All of it has been immediate, involuntary, and unstoppable. But right here - this is where I have a choice. And so do you.

Here's what I do:

Breathe. For me, I've found that if I don't get my breathing managed, then my mind may run away. I take deep breaths in my nose and out my mouth. If I'm in a car when this happens, I point the air conditioner my way or roll down the window. If I have access to the outdoors, then I step outside. That seems to help.

Think and look around. Back in 2013, I wrote about how I began feeling some panic while we were out with friends. My response was to begin narrating the scene in my head. In my post, I wrote:


"While eating delicious meals at restaurants and having great conversation ... BAM - one of those thoughts that doesn't belong.  It was many things.  You don't deserve to be away from Duke enjoying yourself like this.  You should be home with him.  You don't know what could happen.  You won't be able to get to him fast enough.  Don't you remember what happened?  Something is going to go wrong. Immediately, I had redirect myself. It seemed so elementary, but I had to think about where I was, what I was doing, and who I was looking at.  My name is Claire and I'm in Norman and I'm eating these chips and this queso is so tasty and Ashley just said something really funny and ... You can't think about two things at once, so if consciously thinking about putting a chip in my mouth was going to eliminate fearful thoughts, then that's what had to happen." (from my post, Learning to Fight Fear)

No one actually told me to do that, but I found that it turned a panicked situation completely around. And it's worked every time since. It's only been in the recent months that a wise woman/counselor/mentor at my church explained The Rule of 5 for panic attacks. As it turns out, I was unknowingly doing something that is recommended. Find 5 things you can see, 4 things you can touch, 3 things you can hear, 2 things you can smell, and 1 thing you can taste. Panic attacks want to take you to a faraway and nonexistent land of imminent danger. This technique keeps you grounded in the here and now.

I am so thankful I haven't had any other panic attacks since the ones I had in 2012. However, that doesn't mean they haven't knocked at my door. The opportunity has been there, but I haven't allowed them to manifest themselves into anything more. And that's not because I'm awesome and strong. I believe many things contribute to this - my relationship with God, prayer, counseling, the tools I use to combat panic, and the community of people around me.

Don't be afraid of panic attacks. You're bigger than they are and you've got this.
Posted by Claire@MyDevising at 11:39 AM