the days before veda 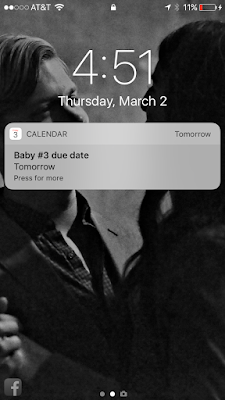 Recording and writing about the day of and the days surrounding my kids' births is one of my favorite things to do. Their birth stories (Duke's, Nova's) foreshadowed so much of their personalities. I think it's so wonderful that even from day 1 we began to get glimpses of who they would become. Veda's labor and birth seems to fall somewhere in the middle of Duke and Nova. She wasn't as stubborn as Nova, nor as prompt as Duke.

I'll start at her due date which was a week before she actually showed up. Each day, I jotted down some thoughts, notes, or happenings.

Veda's due date, March 3rd, came and went just like Nova's due date. It seems that of all the days I've ever been pregnant, the due date is the day that the most people happen to ask, "So when are you due?" They never expect to hear, "Well, today!" 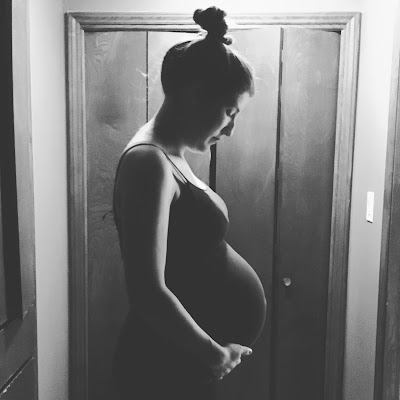 I woke up, took the kids to school, met up with my mom for a mani/pedi, went to my church for a meeting, and then ran some errands. That evening, Colt and I got to squeeze in one last date. 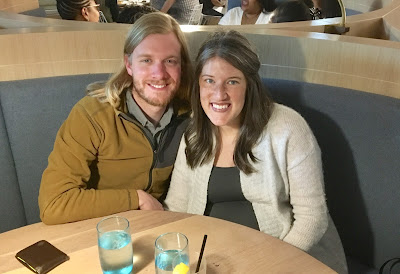 I had registered to go to a conference the next morning, but as I went to bed that night, I wasn't sure if I wanted to go. How do I want to spend what I assumed would be my last Saturday morning before a new baby? I thought through it as I fell asleep. One of the hard things for me to sacrifice during newborn season is not getting out as much as I want to. For me, getting my babies on good schedules with dependable rest and feedings takes priority. So that gave me my answer. I planned on waking up and heading out the door first thing in the morning.

I walked into the church that morning with my 40 weeks plus 1 day belly and all the chaos that comes with buying a house and having yours on the market. One guitar strum into the conference and I found myself weepy. There was a lot going on in life, yes, but more than that, I was feeling the sweet, weird, other-dimension-like tenderness of living past your due date. I was a prime candidate for tears.

It's funny that something I was so unsure about attending ended up being a pretty precious milestone for me. I was challenged in the very thing that was coming my way - a new season.

I am constantly at battle with myself to do more or to do less. I've learned that my natural tendency is to say yes and to commit to more than I should, or at least more than is good for my sanity. Because of that, I've learned to say no and to really try and weigh what takes priority. However, I've also recognized that the enemy can be behind that voice. I can think I'm doing a good thing by saying no or not jumping into something when really it's just fear of the unknown, fear of taking a risk, fear of crowding my plate too much. Not my new habit of guarding my time.

It's not like I walked away with a whole new direction on my life, but I walked away with a little more kindness towards that thing in me that so quickly and eagerly wants to jump up and raise my hand at every request in life. It was good for me to go against my natural grain these past few years by practicing the word "no." I have to remember that no is an option and that it's good for me. But it's also good for me to embrace the healthy version of being someone who says yes and fills life up with what the Lord is asking me to fill it up with.

Being busy isn't innately bad. Like everything, it has to be monitored, balanced, and moderated. What can be bad is the kind of busy that we are. A life of world-induced busy or Claire-induced busy isn't going to feel satisfying or allow for rest, but a life of Lord-induced busy will.

Colt and I got to play one last time together this Sunday at church. Not being able to play/sing on Sundays together is one of the things I miss a lot when I have a new baby. It was sweet that we got one more chance to do it.

I went on a get-the-baby-out walk this night with Tally and Sara. I've done these walks with each of my kids and it's been interesting to see what has come, or hasn't come, from them. After the walk that night, I sat on my birthing ball for an hour or so. Throughout the day, I did a few side lying releases, a suggestion from my fancy midwife friend, Jenni. I also started popping those Evening Primrose Oil pills.

I finally got my bag and the kids' bags packed for whenever Veda decided to show up. You know, things you should probably check off the list three days after your due date.

I had one of those still-asleep-but-awake moments early this morning when I thought, I'm having a contraction, but I don't have to wake up for it. After a handful of contractions in that state, I finally jolted awake at 5:15 a.m. with a contraction that had a little more sting to it. However, I could still lie in bed and breathe quietly through it. And that's how they continued for the next 2 hours in bed. I had about 7 of them, 15-30 minutes apart.

I got up that morning and realized there were some other signs that things were moving along. Contractions continued the rest of this morning, but only every hour or hour and a half.

I had an appointment at 11:45 a.m. that day and was excited to tell of my labor beginning. I had dilated to a 1 at 36 weeks and a 2 at 37 weeks. I stayed at a 2 until this day, 40 weeks plus 4 days. My doctor told me I was 70% effaced and dilated to a 3. A THREE. I had already been amazed at how much I'd progressed so far, but hearing this was beyond exciting.

Around 3:30 p.m. that afternoon, contractions got closer together and happened every 15-30 minutes until 11:30 p.m. that night.

I woke up with a contraction at 1:30 a.m. and had one every 45 minutes to an hour throughout the rest of the morning.

Around 2:00 p.m., they took a turn and got a little more painful. They occurred anywhere from 9-30 minutes apart and the intensity had grown by the time we went to bed that night.

My parents kept the kids overnight because I really thought this was it. Colt and I took a late night walk, hoping to rev everything up. However, the reverse happened, as they began to spread out a little more.

We went to bed late that night. Contractions continued and, while I was able to drift off to sleep in between them, I did have to get out of bed to stand up and breathe through each one.

Around 4 a.m., I moved to the bath. Lights were off, candles were lit, music was playing, and I was contracting every 6-10 minutes for awhile. After an hour and a half, they began spreading out a bit more, so I decided to finish the night in the living room.

That morning, we decided to head to the hospital. It was around 9:30 a.m. and although I felt ready, I also felt strange. I shouldn't be headed to the hospital in the daylight to have a baby. That's such a nighttime-while-everyone-is-asleep kind of activity. There's something weird about this. But contractions were pretty painful and around 8-9 minutes apart, so we went.

As things like this go, we stepped into the hospital and the contractions spread out. We were there for a total of 2.5 hours and I only had 4 contractions in that time. Also, the nurse informed me that I was still dilated to a 3. "You said I'm still a 3?" I had to make sure I was hearing her clearly. It had been 2 full days of labor since my last appointment when I was a 3. All of that and no progressing? It was hard to believe, but I did light-heartedly tell her, "You know, I knew this couldn't be it because it was daytime. I don't go into active labor when the sun is out."

She asked if I wanted to get induced. As much as I wanted this baby out and these contractions to stop, I said no.

A few days earlier, I had a dream that was so vivid. I dream a lot and so many of my dreams have real meaning. God gives me direction or reveals something or gives me some kind of encouraging word/picture/story for someone else. Many times, even seemingly silly or strange dreams have significance. So over the years, I've learned to pay attention. I won't go into the details of the dream, but I felt very strongly that I should trust what I was sensing and opt out of getting induced.

This left me with no other option than to go home. I had to keep laboring and keep doing what I was doing which, at this point, felt like a form of torture. I'd never gotten labor "wrong." It was surprising to me that with the way my body felt I wasn't further along. I was exhausted and hitting my emotional breaking point.

Colt and I got in the car and I cried a lot. We drove through Cane's to grab lunch and the sweet young girl working the drive-thru said, "Whoa, you're about to pop!" It made me want to cry more - not because she had offended me, but because I was thinking, Well, you'd think so!

Colt drove me to my parents' house where the kids were and then he headed back to work. Contractions were very painful and came every 6-10 minutes throughout the evening. There were also some additional signs that labor was picking up and things were changing.

We had the kids stay with my parents overnight again because I was certain there couldn't be another day of this. There was just no way.

We headed home and decided to sleep on the two couches in our living room because it was much easier for me to pop up and contract from there. At the nurse's suggestion, I took a Tylenol PM to keep me drowsy enough so I could fall asleep in between contractions. I also kept the low murmur of HGTV on in the background to help distract from the pain. The contractions continued throughout the night around every 10-12 minutes.

It was a slow and quiet night with not many words to each other. For most of my contractions, Colt, a normally heavy sleeper, heard my movements as I got up to stand. By the time I let out my first breath, he was next to me. I will always hold some sweet memories from this night.

The pain took another turn. I was absolutely certain this wasn't going to slow down. We were going to have a baby. We left for the hospital around 3 a.m. 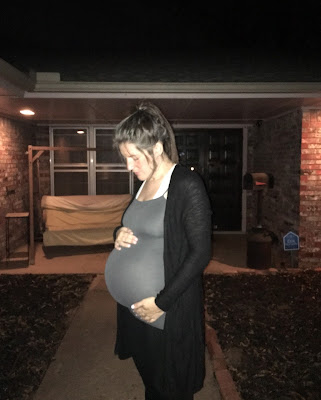 Posted by Claire@MyDevising at 10:18 AM